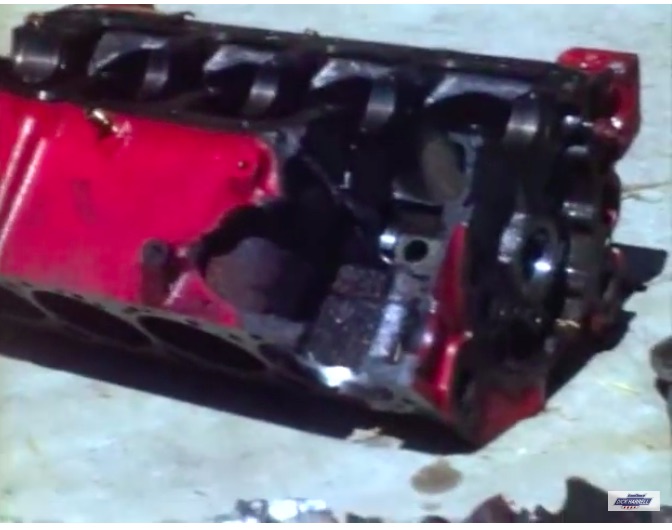 Now this is some of the best footage we have seen in a LONG time. Our pal Jarmo tipped us off to this and we watched, wide-eyed the whole time. You are about to see beautiful, color footage (sans sound) from places like San Fernando Drag Strip, Lions Drag Strip, El Mirage, and, well, people’s back yards depicting drag racing scenes from the 1960s.

A very young Dale Pulde in his ramp truck and “Vicious Camaro”. Guys like Flamin’ Frank Pedregon, and other great competitors of the day are shown here but more importantly the fun and horsing around that drag racers are so well known for is shown off as well. From guys popping wheelies in some weirdo home-built buggy they made or people making goofy faces in front of the camera, this is a very fun thing and it shows that for as far as we have come in the sport, the people will forever be the same. That’s a good thing, by the way.

The lead photo shows a wholly decimated engine that you’ll see plenty more of if you take the time to watch the footage. We don’t think that there a destructive force outside of nitromethane that could have pulled this move off. Hell, the whole front corner of the block is gone. The entire CYLINDER is just outta here. That’s something that drag racing’s magical elixir could do. This was also the era when those engines were the LS motors of today and the boys were likely at the wrecking yard, springing another one for 25 bucks the next day.

Sit back, relax, and watch this. Imagine yourself there, California sun shining and cackling drafters in the background. Not a bad place to (mentally) spend a Monday.

Press play below to take a stunning trip back in drag racing time!

Vintage Road Test Video: Watch A 1971 Mercury Cyclone Get Tooled On And Evaluated! Awesome In-Car Footage Of A Blown Hot Rod Taking On A '55 Chevy At The Nostalgia Drags