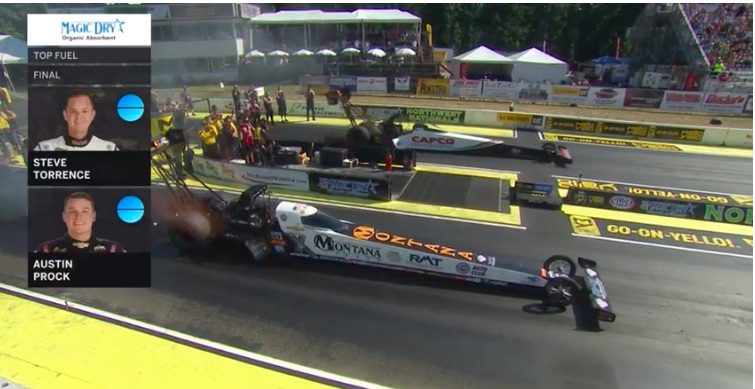 It is easy to understand how Austin Prock would have been a little nervous on Sunday at Seattle. He was appearing in his first ever top fuel final round. He was doing it mere seconds after his team owner and boss had just won his 150th event, he was racing Steve Torrence, the most dominant force NHRA top fuel has seen in decades, and he was carrying a family name that had last seen an NHRA final round (from the driver’s seat) in 1976. The kid is in his 20s but he has lived racing his whole life. He know every inch of what this moment meant.

As it would turn out, the insane Sunday of history and madness in Seattle had one more surprise for all of us and it came the second that both cars left the starting line. The reaction times were miserable. These two guys who are top shelf drivers. Top shelf leavers. Seemingly unflappable in all scenarios were very flappable in this moment. Torrence mistakenly double-bulbed Prock. That set forth a series of events that saw Prock sitting in his car with the clutch IN when it should have been out.

The kid swapped feet in a top fuel car as the tree flashed and the resultant .275 reaction time would have been his undoing if Torrence had not smoked the tires. Torrence himself was a day late as well but still more than tenth of a second better than Prock. It was not the final round anyone expected in terms of performance but it was the final round we got and it was perfectly symmetrical to see the new guy and the old guy win on the same day.

If this team has its program together now, look out. Big things could be on the way.