Finnegan Cruises Blasphemy On The Las Vegas Strip After Some Gasser Grudge Action! 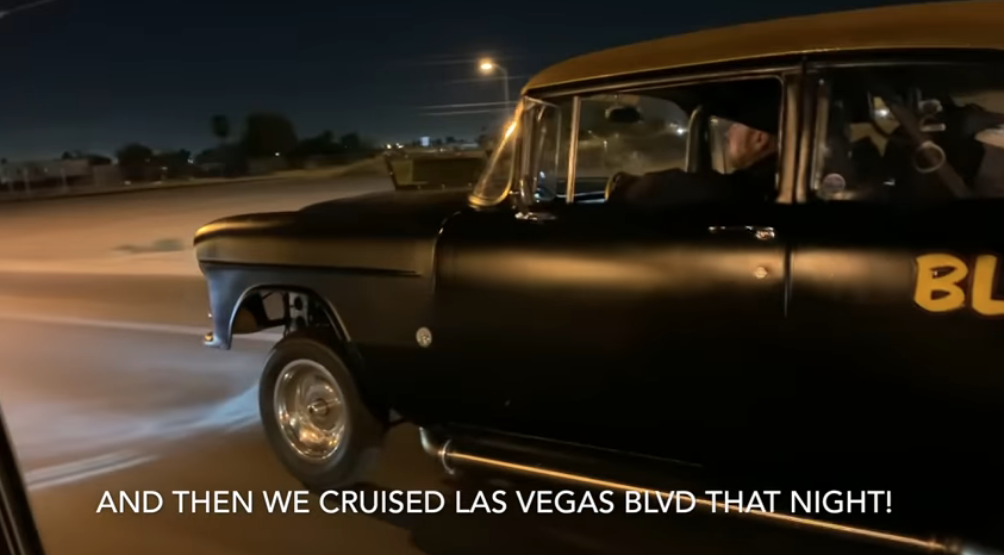 Cruising your hot rod or race car down the Las Vegas Strip means a couple different things in Sin City. You see, there is The Las Vegas Strip and then there is The Strip at Las Vegas Motor Speedway. In this video you’ll see Finnegan hauling ass on the dragstrip and getting his cruise going on The Las Vegas Strip, both in his 8 second 55 Chevy Gasser called Blasphemy. This is a car that has been through a lot of trials and tribulations in the past couple years but has ultimately turned into a pretty hot little gear grabbin’ number. Finnegan can wheel this bad boy, that’s for sure, but thanks to Eric Yost at Customs by Bigun, and Peter Harrell at HED Race Engines, this car is working better than it ever has. We’re talking big hook, some cool wheel stands, big power, and mid 8 second time slips. You just can’t shake a stick at that folks!

And to then take said 8 second ride and cruise it around Las Vegas until you have to drive it into the SEMA Show for it’s parking spot at the MotorTrend booth, is pretty rad in our book and we know Finnegan loved the hell out of it. Of course he couldn’t have done it alone and you’ll see all the guys who helped make it happen in Vegas right here in this video.

If You've Missed Any Of Our SEMA Show Photo Coverage, Then Check Them All Out Here! 2019 PDRA World Finals Action Photos: The Baddest Eighth Mile Door Slammers On Earth Hit The Strip

2 thoughts on “Finnegan Cruises Blasphemy On The Las Vegas Strip After Some Gasser Grudge Action!”