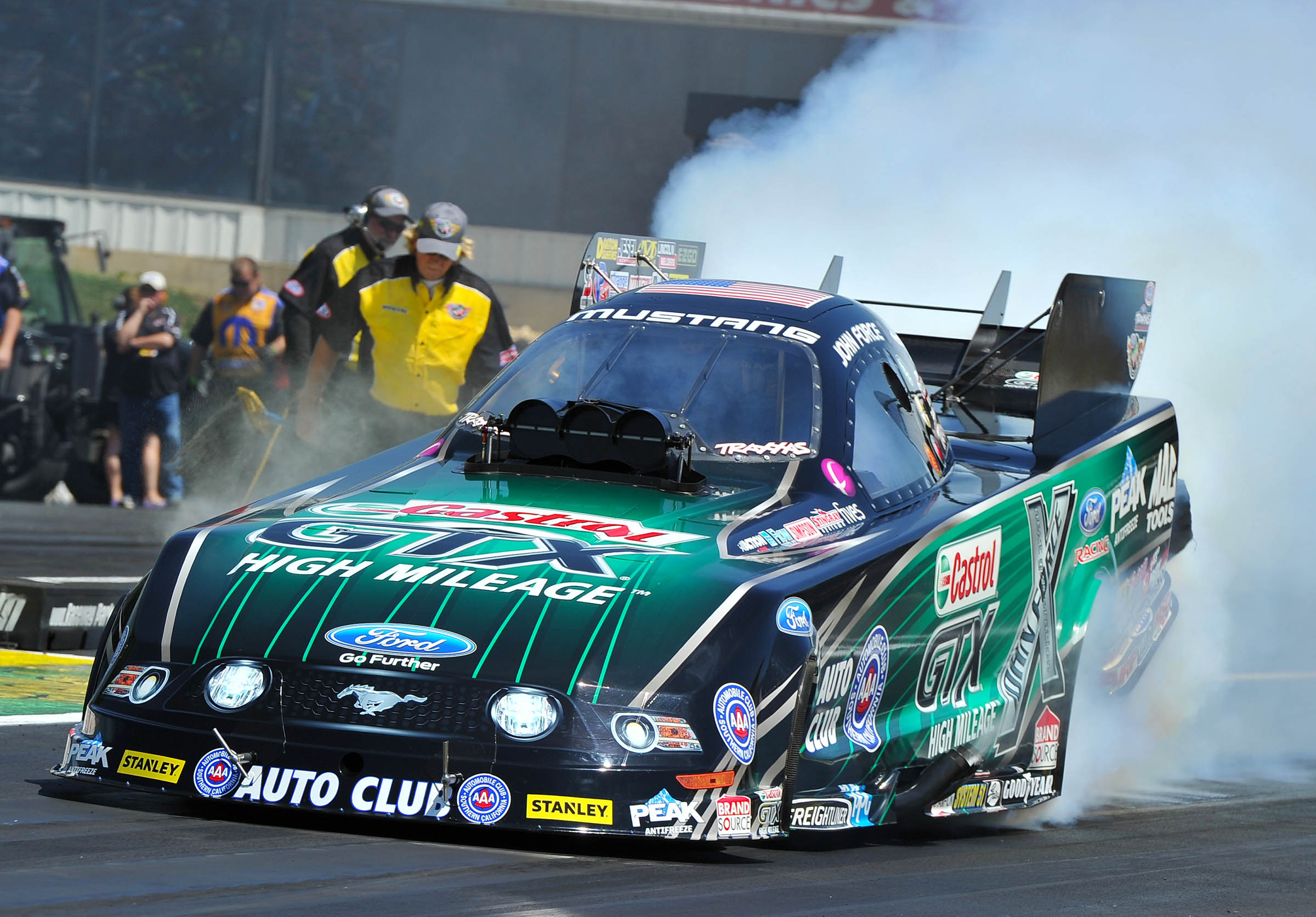 In the face of adversity, the strong strive, and John Force Racing is clearly striving even after being told that they are losing both Ford and Castrol at the end of the 2014 NHRA Mello Yello Drag Racing Season. Despite Force’s loss in the first round, and Hight only making it to the semi final round, they hold the number 1 and 2 positions in points for the 2014 season. Cruz Pedregon ultimately won Funny Car, Richie Crampton won Top Fuel, and Jeg Coughlin gave it to Greg Anderson in the finals of Pro Stock. Andrew Hines found himself on the top of the Pro Stock Motorcycle heap after taking out former teammate Eddie Krawiec.

Englishtown has long been one of those tracks that gives as much as it takes, where stellar performances and utter failure seem to go hand and hand in the same weekend year after year. With tricky track conditions that had some teams baffled, it’s no wonder E-Town continues to be a spectator favorite. 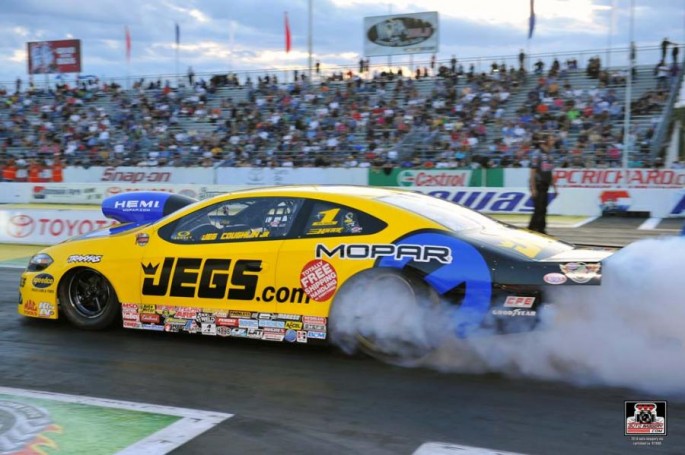 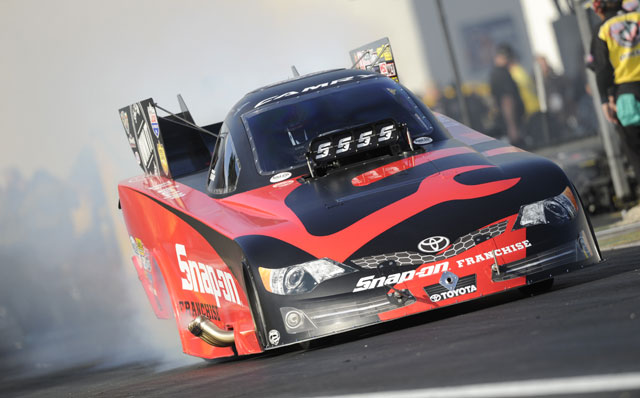 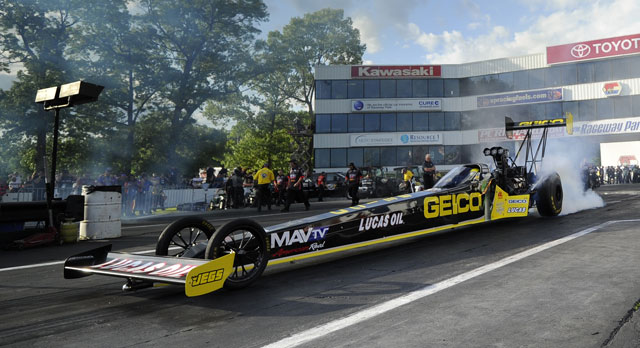 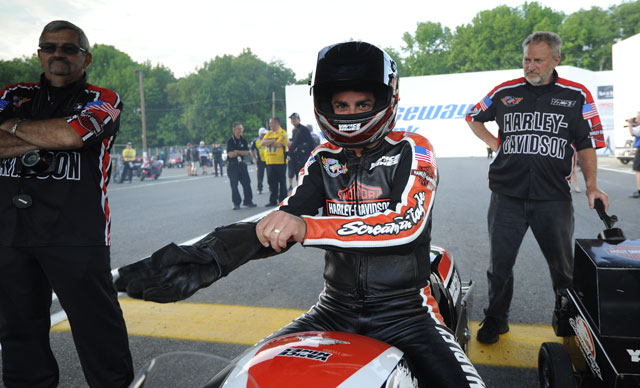 ENGLISHTOWN, NJ — For the 74th time John Force Racing will leave a Mello Yello Drag Racing Series event 1-2 in points. For the eighth consecutive event Robert Hight and the Auto Club Ford Mustang sit at the top leading teammate and boss John Force and his Castrol GTC High Mileage Ford Mustang. Courtney Force has surged up the Funny Car point standings positioned No. 6 and only eight points out of 4th place. While JFR is dominating the Funny Car category Brittany Force and the Castrol EDGE Top Fuel dragster continue to improve and hold steady at No. 8 distancing themselves from the drivers behind them in the point standings.

Today at the 45th annual Toyota Summernationals Robert Hight raced to a semi-final finish losing to Del Worsham in a close race which Hight led until his Goodyears hazed the track at the top end. Hight entered the race as the No. 3 qualifier and took out Bob Tasca III in the first round.

“Getting that first round win was huge. Once you get past the first round this Auto Club Funny Car has been pretty strong. There are a lot of tough Funny Car still left but I am hoping to go some more rounds today,” said an excited Hight at the top end following his opening round win.

Hight would square off with one of the toughest drivers he has faced in 2014, Alexis DeJoria. Hight dropped two final round races to her earlier this year before getting his first round win over her in Houston on the way to his 32nd career win. Hight’s solid 4.086 second winning elapsed time was good enough to give his Auto Club team lane choice in the semi-finals versus his long-time friendly rival Del Worsham.

Hight took a solid starting line advantage from Worsham in the semi-final race but a tricky left lane bit the Auto Club Ford Mustang just past half-track opening the door for Worsham to advance to his first Funny Car final since the 2010 installment of the Toyota Summernationals.

With a strong qualifying effort and consistent performance, Brittany Force still came up shy of winning the 45th annual Toyota NHRA Summernationals. Her Castrol EDGE dragster looked strong all weekend and was a contender to win today. 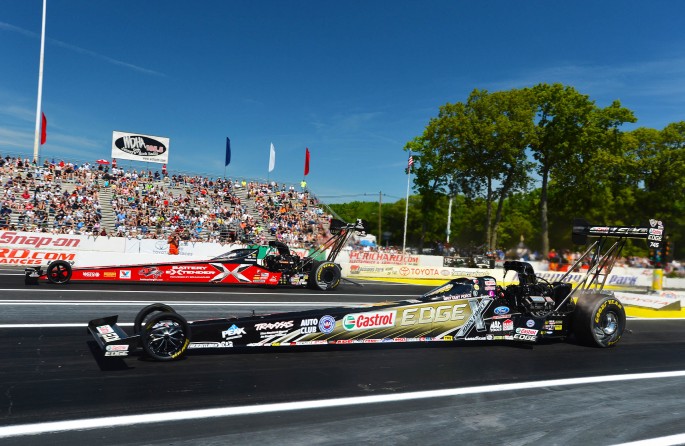 Brittany Force had qualified fifth with a stout 3.777 second run at 324.44 mph earlier in the weekend. Racing from the top-half of the field, Brittany had lane choice going into the opening round in which she would face Spencer Massey. It was Massey that that put Brittany on the trailer in the semi-finals during last weekend’s NHRA Kansas Nationals in Topeka, Kansas. Brittany was looking to even the score. As the lights on the Christmas tree came down, Brittany’s Castrol EDGE Dragster blasted off with strong 3.789 second run and took the win.

“I was excited to get that win against him (Massey) in round one. He got us last weekend so it was our turn this weekend for the Castrol EDGE team to beat him. We were hoping to go some rounds and we had lane choice going into round two so I was very excited because that number we ran in round one was awesome,” said Brittany Force.

During the quarterfinals, Brittany Force lined up with Morgan Lucas. Once again she had lane choice and it was the first time these tough young competitors have faced each other. At the first hint of green, both dragsters left the starting line side-by-side. Brittany’s Castrol EDGE dragster was charging hard on the top end then the tires broke loose around 600 foot mark.

That’s when the Goodyear slicks started to smoke and her car began to slide around. All she could do was watch Lucas drive away and get the win. It was a tough break for the 2013 NHRA Auto Club Rookie of the Year who has working hard on achieving her first Top Fuel win for the Castrol EDGE team and John Force Racing.

“I’m very disappointed in how it did in the second round. We had a strong car all weekend and we were running 3.77 and it was pretty consistent. We were in the left lane which had been the better lane during the first round of eliminations. I felt just as long as the car went down the groove, we’d be okay. I felt the tires break lose and I tried to pedal it. It did hook back up but it wasn’t enough to get past Morgan Lucas,” said Brittany Force.

No losses are easy to take for any professional drag racer, regardless of how many passes they’ve made down the strip. However for Brittany Force, she doesn’t dwell on her last round of competition. Brittany stays positive and focused for the next race on the NHRA Mello Yello Drag Racing Series.

“It was still a good weekend since we got past the first round. That was always tough for us last year, right now we’re moving in the right direction and going rounds. The Castrol EDGE dragster is running really strong and Todd Smith, Guido Antonelli and the rest of the guys are doing a great job. I’m ready to head to Bristol and get back in the cockpit of my dragster,” said Brittany Force.

It wasn’t a good day for drag racing legend John Force as the three-time 2014 finalist lost in the opening round. Persistent clutch issues have plagued the Castrol GTX High Mileage team for the last few races once again sidelined the seasoned veteran in round one. Force had been hoping to claim his 140th career victory and end his thirteen year drought of being winless at the NHRA Summernationals. 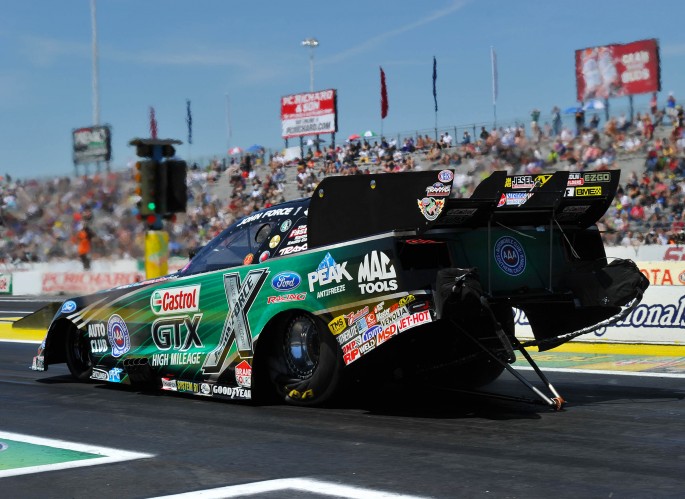 “My car had run 4.01 in qualifying and we pushed it harder, we’d thought it could run faster today. We had been running big speed but unfortunately the clutch disintegrated within 100 feet. We’re going to address these issues. Luckily, we remain second in points,” said John Force.

The 16-time NHRA Mello Yello World Champion had made a solid run in his Castrol GTX High Mileage Mustang on Friday with a 4.015 second pass at 310.48 mph and he qualified fourth. John Force drew Matt Hagan in the opening round on race day and had the advantage of lane choice. These two have done battle eighteen times and faced each other in the finals at the season opener NHRA Winternationals.

John had a slight reaction time advantage over Hagan and did a great driving job to reel his Mustang back into the groove at Old Bridge Township Raceway Park. Unfortunately he couldn’t catch Hagan.

“We build big power, that’s why when it runs, it runs good. That’s why we have the NHRA national record. Maybe that’s the problem, we’re too fast and it’s hard on the clutch. We ran good earlier in the season and despite struggling these last few races, we’ll fix the clutch problems and get this Castrol Hot Rod in the winner’s circle,” said John Force.

“It’s even tougher losing early at Englishtown because this is Castrol’s home track. Their headquarters are just up the road in Wayne, New Jersey and we had many of their folks out here with us this weekend in our pits and up in the stands seeing our hot rods making some noise and Robert Hight going to the semi-finals,” said John Force.

The Castrol GTX High Mileage team leaves the NHRA Summernationals still in second place with 601 NHRA Mello Yello Funny Car points. They’ll have a weekend off and head back to the shop in Brownsburg, Indiana to regroup and work through the clutch issue before heading out on the road again. The next race will be the Ford NHRA Thunder Valley Nationals at Bristol Dragway.

“We just need to keep the faith, never give up, never look back just keep looking ahead,” said John Force.

Courtney Force qualified in the top half of the field this weekend in the No. 7 spot and had lane choice going into the opening round against fellow Ford racer Tim Wilkerson on race day. Despite Force’s 7-1 winning record against Wilkerson in previous events, the Traxxas team posted a 4.116 ET at 312.78 mph to the Levi, Ray & Shoup Mustang’s 4.073 ET at 301.33 mph and handed over the win.

“We came out this weekend off of a win and had a strong race car. We went down there, made a decent pass running a 4.11, and just got outrun. We didn’t expect Wilkerson to come out and lay down such a great number in that right lane. That was a tough lane to run in. Good job by him and his team,” said Force.

The 2012 NHRA Auto Club Rookie of the Year who picked up the 100th pro win for women last week, slipped one spot in the NHRA Mello Yello Funny Car points with this first round loss, and will go into Bristol in the No. 6 position.

“It was tough for us, but we’ll come back next weekend in full force. We’re just happy that we have a consistent race car and thinks are looking up for this Traxxas Ford Mustang team. We’re going to move forward with our heads up,” said Force.