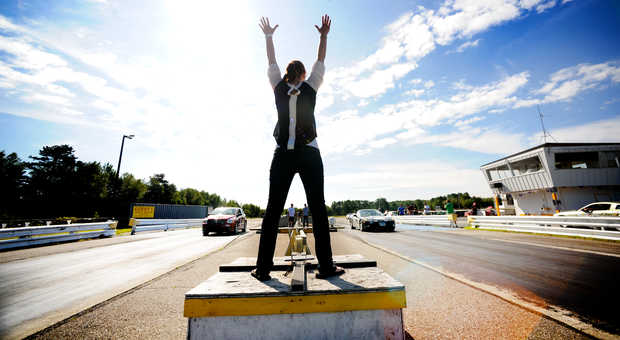 (Photo credit: The Sun Journal) – Citing declining revenues and personnel issues, the current ownership of Oxford Plains Dragway has decided to close the facility for the entire year outside of one event that the track will hold in roughly a week. The decision was made by the president of the facility (which also has a circle track) Mike Mayberry and has been met with the reaction that you’d expect from dedicated races and fans of the sport. The eighth mile track opened in Maine in 1969 and had many strong years before running into the lean times of the last 5-7 years. Different groups have leased the track to keep it open and Mayberry did not commit for sure that the track could be leased but he seemed to hint towards it being possible if the right offer was made. The facility is small and pretty humble but it is a good strip with all the proper guts to fully operate. Those guts will be sitting and rotting slowly now so that when/if it can ever be opened again, there will be twice as much work to do.

It has been rumored for more than a couple of seasons that the Mayberry family wanted to close the strip as it was not much of a money maker as compared to the circle track and the place required more effort than they were wanting to give for the return. A woman named Crystal Lancaster had stepped into the management role this year and she was full of the energy and vim that the place needed to get back on its feet. For the last couple of seasons inconsistency in schedule and other factors had taken their toll on the track and kept it from achieving steady week to week revenues. When the Mayberry family bought the property, they wanted the circle track and the drag strip came in as some sort of a red-headed stepchild so it has been seemingly treated as such since day one.

The straw the finally broke the camel’s back was the resignation of the woman who runs the computer for the timing system in the tower at the track. The Mayberry family seized on a good sounding opportunity to release a statement that made it sound as though the resignation of this person left a void so vast that they’d never be able to find a person to fill it. This is a gross exaggeration of course and while everything takes some learning it would be about a week before the new computer operator was comfortable enough to enter numbers into the computer system as cars came to the starting line. Here’s what the track said:

We found out at 10:45am on Friday, May 30th that the employee that handles the scoring system was resigning from her position at the drag strip. Since we do not have the proper help to operate the drag strip for the weekly race season, we will not be running the weekly series at the track this season.

The simple answer is that if the Mayberry family gave a rip about the drag strip they would find someone to fill the position and let someone like Crystal try to revive the place from the dead with solid customer service, a good attitude, and a passion for the sport of drag racing. Instead, they seized on a momentary problem and decided to use that as the reason for shutting the place down. WEAK.

What will become of the place? There are murmurs that a group may try to lease the track from the Mayberry family and operate it but at this point it would be done out of mercy and to keep the place from slipping completely under the waves as opposed as being done for the purposes of profit. The track needs someone who will throw themselves at it and not expect immediate returns or glory but is content to toil and rebuild the image, name, and scene around the facility.

More Cool Cars and Trucks From The Somernites Cruise in Somerset, Kentucky - Plus We Get To Shoot A Cannon! Force Racing Keeps All Challengers At Bay. Still 1-2 In Points. Pedregon, Crampton, Coughlin, and Hines Win In E-Town