Andy From Motion Raceworks Makes His First Rip In His Twin Turbo GTO, And Gives Them Hell At Cleetus And Cars With The Bald rEAGLE. 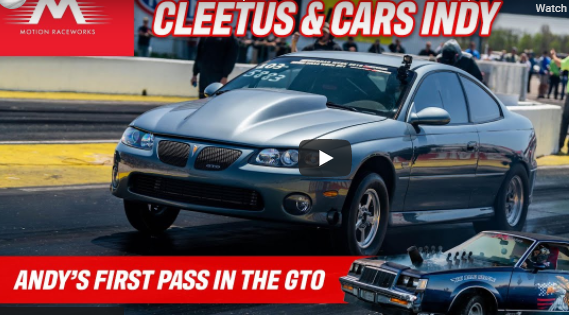 Andy Cook was in rare form at Cleetus and Cars Indy. With two cars to drive at the event, and the good name of Motion Raceworks on the line, Andy gave it his all. His Twin Turbo GTO project, would make its first hits on the dragstrip there and he also had the Bald rEAGLE to let fly in the burnout contest. Andy is no stranger to making awesome stuff happen in the Bald rEAGLE, as he’s already finished second at a Cleetus and Cars event with it. But would Indy be the spot where he would take victory? Before heading into the pit he said he was going to win, or put it on it’s lid. That’s the spirit my friend!

His GTO on the other hand is his baby and this car makes big power and is put together right. But it is still an IRS car and that is always something you have to be careful with. Would the car perform the way the guys thought it should? Would it run in the 9s? The 8’s? The 7s? At the hit on the first run I’m sure Andy was wondering that himself.

Check out the video below, which also has all of the burnout contest from the Motion Raceworks crew perspective.

Exploring A Closed And Abandoned Auto Museum Full Of Classic Cars, All Of Which Are Going Up For Auction! 2021 Pigeon Forge Rod Run: More Photos Of The Massive Car Show In Tennessee