Photos And Fun From Our Daphne Reynolds Memorial Drag-o-Rama Trip, With More To Come! 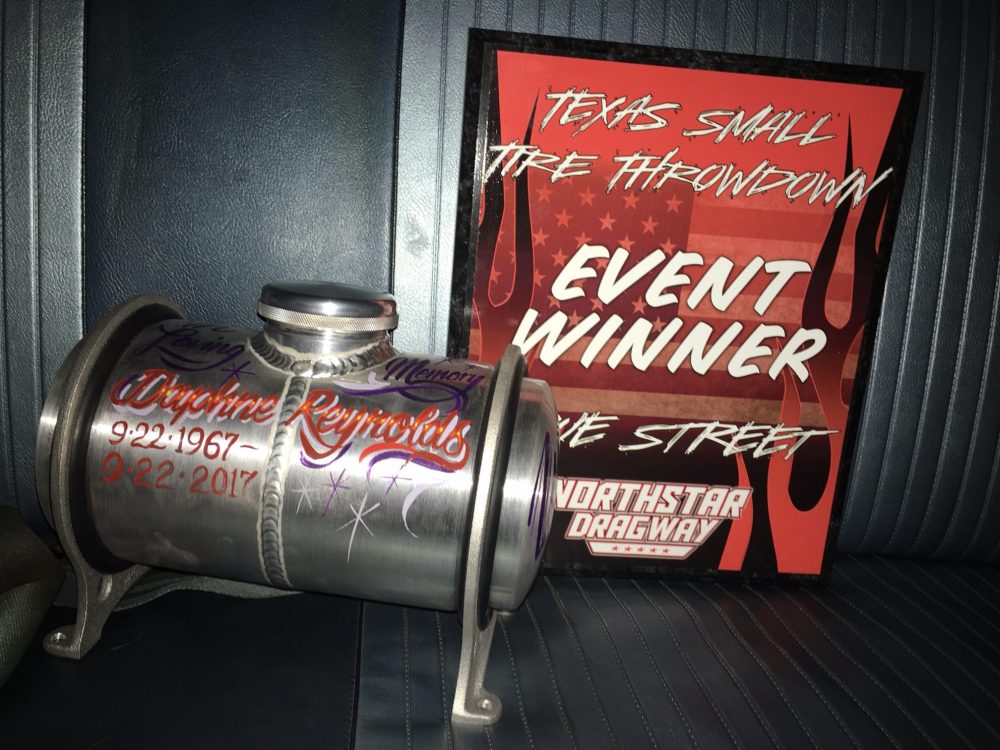 On September 22, 2017 my wife Daphne, and mother to Cole and Peyton, passed away after a year long battle with cancer. It was her 50th birthday. She was one tough chick, and for most of that year she got stronger, better, and faster. In the end, new growth of the cancer she had been kicking ass against was just too invasive and aggressive to beat, but only for a few weeks. We spent the entire summer before this racing, traveling, and having fun. It was a fitting final summer to a life together that has been full of fun and adventure. This past summer gives me some comfort and wonderful memories, but also makes it hard to race her car across the country like we are doing now.

CLICK HERE TO READ THE STORY OF CHAD AND DAPHNE… It is a tribute that will explain a lot.

In honor of that fun and adventure, the kids and I came up with a hair brained scheme to get Daphne’s wagon, Ethyl, ready to roll for yet another racing road trip. We were going to drive it from SoCal to Tulsa for the Throwdown in T-Town, and then off to Northstar Dragway in Denton for the Radial Tire Racing Association race, and then to Redemption 10.0 in Ennis Texas before driving it back to SoCal in time to do some laundry and jump in the Suburban for a ride to Las Vegas for the 2017 SEMA Show. When Ken Thwaits from Fraklin Road Clothing Company called and asked if I would race under the Franklin Road banner for Optima’s Ultimate Street Car Invitational in Vegas following the SEMA show, which meant the wagon needed to be there Monday night before SEMA, we were excited to add a 4th race in 4 weeks. And also a little overwhelmed.

We thrashed to make sure the car was ready to go, making upgrades that smart people would have waited to do until later, and ultimately got out of town with a car full of parts because we didn’t have time to make everything happen like we wanted. The trip to Tulsa was successful, although we had a fuel pump issue once we got there. We made arrangements to replace what we had with all new Aeromotive components once we got to my parents house near Dallas and also to complete a 4L80e swap before going to the races at Northstar.

We won True Street at the Radial Tire Racing Association Texas Small Tire Throwdown at North Star Dragway in Denton Saturday night! We couldn’t have done it without some divine intervention and help from Daphne above. I feel like crying every time I pull into the water box in this thing… I hope that never changes. 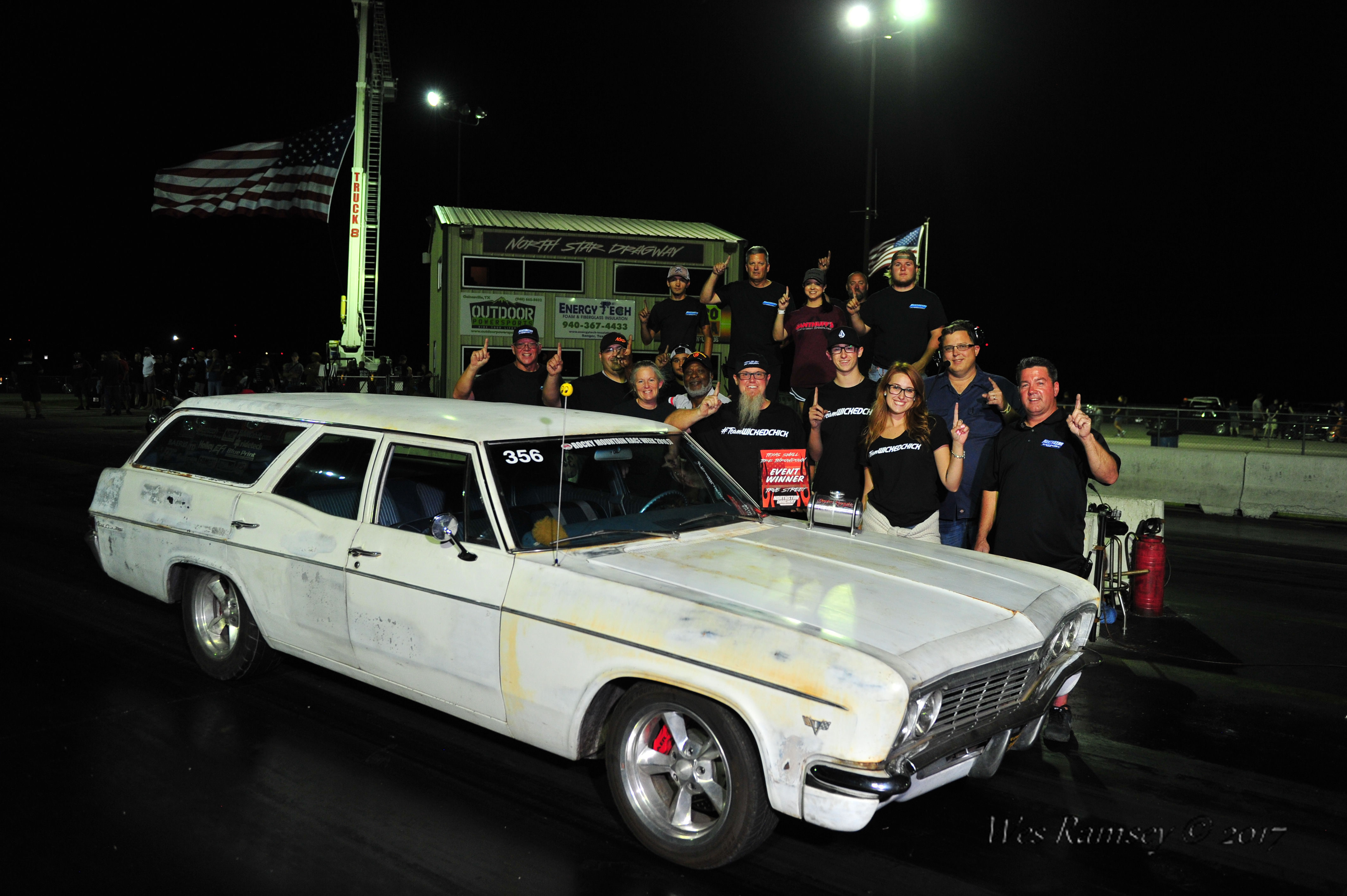 The purse was $1000 and we took the whole damn thing home! No split baby. Summit Racing Equipment here we come! LOL

We had Daphne in the winner’s circle with us, in the bitchin Mooneyes tank that Chico and the boys made us custom for her urn, and who our friend Tim McColgan lettered up for us.

I want to thank my mom, Judy Lanning Reynolds, dad Walt Reynolds, Lowell Enloe, Milton, and Cole Reynolds for thrashing all night and the following morning to get me to Denton. I appreciate it so much, and love you guys.

The win was awesome, and would not have been possible without some divine intervention, or Daphne pulling some strings from up above. It was apparently our day,

We swapped the 4l80e into the car at DuSold Designs last week, building a custom crossmember in Mike DuSold‘s shop, and then thrashed installing the Earl’s UltraPro hoses and fittings along with the new Dominator ECU, etc. We only fired it up and drove it under its own power 2 hours before arriving at the track which is a 50 mile drive away from Mom and Dad’s shop! Cause that’s how we role.

The True Street 30 mile cruise, which we laughed at by the way, was a breeze thanks to our bitchin RideTech Air Ride Suspension and Vintage Air, Inc.,

Special thanks to Ben Conant DJ Safety for my awesome helmet, belts, and safety gear. Impact Racing for the Accel head and neck restraint system I use, along with Edelbrock Performance, Spectre Performance, MandHtires.com MH Racemaster, Baer Brakes, Xs Power,

We also have to thank Westech Performance Group, Steve Brule, Steve Matusek, Bub Miller, Jay Ligtenberg, David Stoker, Stoker’s Hot Rod Factory, Mark Bowler, James Crosby, Shaun Callaway, Trevor Hayes, Derek Lamb, Scott Liggett, Scott Clark, Jeff McConnell, Sherry Larson, Bret Voelkel, Aaron Sockwell, and everyone else that I’m forgetting who has helped with the car at some point or another. Daphne would be so proud that her Ethyl did so well, and that both Peyton Rae and Cole were there for it.

This week we’ll cruise the car around Dallas, and then Friday we race again at the Redemption No Prep Series 10 in Ennis.Optima Ultimate Street Car Invitational.

Who wants a piece of this big nitrous huffing bitch?!?!?!

Larry Larson, we’re going to have to do some big side by side burnouts together, cause this things loves to smoke the tires for a few hundred feet. I’m not sure I can back up quite as fast though. We’ll have to see.

This weekend we’ll be racing at the Texas Motorplex during the Redemption No-Prep Series 10 event in Ennis and then hauling ass for Vegas the next day. We’ll have tons of updates along the way, so stay tuned.

Below you see some of the photos we have so far, and promise to bring you more this week. To those who have stopped and said hello, who have offered condolences, and who have supported us through all of this, we can’t thank you enough.

2017 Brian Olson Memorial PDRA World Finals Coverage - More Great Action From VMP Project De La Vega Is Turning Into One Bad Turbocharged Machine! This Is Going To Be One Of The Baddest Vegas Ever.

19 thoughts on “Photos And Fun From Our Daphne Reynolds Memorial Drag-o-Rama Trip, With More To Come!”