Apr 15, 2014Brian Lohnes1320 NHRA News, BangShift 1320Comments Off on Corey Michalek’s Top Alcohol Win At Charlotte Is The Coolest Thing I Have Ever Announced In Drag Racing 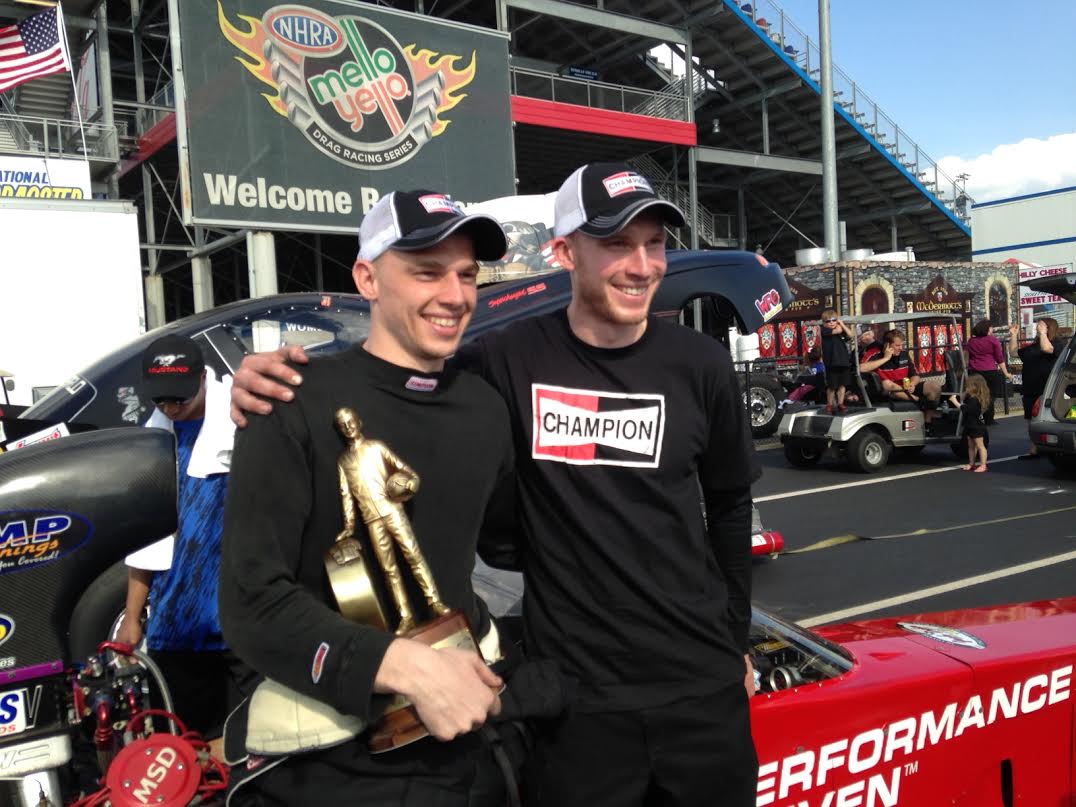 So as many of you know, I am on the announcing staff with the NHRA for about half the scheduled races during the 2014 season. I worked at the Gatornationals in March and just returned from my trip to the NHRA Four Wide Nationals in Charlotte which was held last weekend. The racing was great and the crowds were really good. It was my first time at the cavernous zMax Dragway and it is certainly a place I recommend every drag racing fan check out when they can because it really is something else.

Every announcer has their “favorites” in terms of classes and I really love the alcohol stuff. I love ’em all but the alcohol cars are really cool and largely under appreciated by lots of fans, so I feel like it is my job to educate people about the cars and the great people that campaign them. Some weekends that is easier to do than others, especially when a story like the Michalek brothers plays out as it did last weekend. 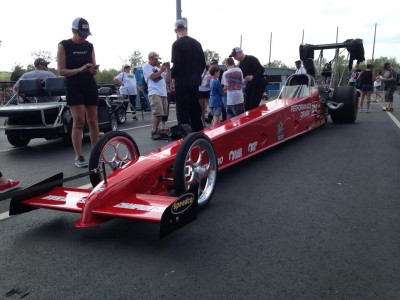 You may remember Corey Michalek’s name from BangShift previously as he was the guy behind the incredible Top Fuel Experience video (WATCH IT HERE) which he made while working as a crew member on Pat Dakin’s top fuel car. See, the Michalek brothers are not a couple of rich kids in their 20s that decided drag racing sounded like more fun than polo. Nope, these guys are the real deal who have worked and wrenched and bled in the pits for years learning what the finer points of running a race team are and how to work with the best racing fuel in the world, nitromethane. While working on the top fuel team was an awesome experience, it was not the Michalek brother’s end goal. These guys wanted to campaign a nitro burning dragster and they needed the one thing that every team needs. Money. Cue cinderella story…

The Michalek brothers won the 2012 Champion Spark Plugs “Search For A Champion” contest which landed them a $50,000 sponsorship and the ability to partner up with Dreher Motorsports and field an A/Fuel Dragster in NHRA competition. The partnership with Champion has continued on for three years since the contest win, standing as proof that the bothers are seriously dedicated to making themselves a national contenting operation by the time they’re said and done. After their impressive victory in Charlotte, everyone is paying attention now.

Outside of who the guys are, what made this victory so neat was how the whole thing came together. For starters, the team was in the proverbial soup for the first two of three qualifying sessions. The first lap was a throw away and the second was scrapped due to mechanical issues. It was frankly looking pretty grim by the time that the third qualifying session rolled around because the bump spot had been knocked down to a 5.50 and Michalek career best at that point was a 5.55. The good news for fans and announcers was that the cars were flying but that meant the Michalek team would need a big (historically speaking for Corey anyway) lap to bust into the field. We all took a deep breath when Corey staged the car and then landed on the throttle, the team’s hopes and dreams for the weekend pinned directly to him. A 5.32/266mph lap was the result of their effort and suddenly the team that was lost in the woods was qualified in the top half of the field.

I have often seen things like this happen to a team that is seemingly in trouble for the weekend. If they can get their act together on that last qualifying lap, it actually sets them up 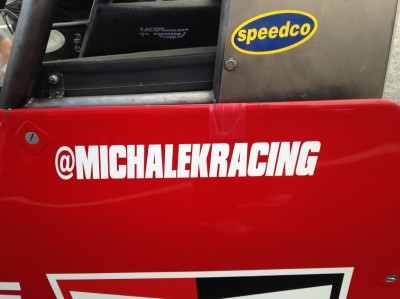 perfectly for the first round of eliminations which takes place just hours later. Proof of that statement came when the boys took out Matt Cummings in the first round. Corey left on him and the team’s Champion sponsored dragster stopped the clocks with a 5.32/270 shot and the team advanced to earn the honor of racing on Sunday. Come Sunday morning, the conditions were totally different and the track had changed from the day before. None of this seems to have mattered one iota to the Dreher boys tuning the car because Corey shot to a 5.313/272 elapsed time while downing Randy Meyer (who he also left on). Even the most optimistic outlook on the weekend would have been clouded by the sobering thought of having to race Bill Reichert in round three. Riechert’s car had been running in the low 5.20s all weekend and looked like an unstoppable juggernaut. Even under the best conditions, there are few teams that can flat out beat Reichert by out muscling him. The good news for Corey Michalek is that he didn’t have to. Reichert turned on the red light and fouled away any potential victory on the starting line which then set Corey up for a final round against Brandon Booher who was the number six qualifier and had run a nearly identical 5.32 second lap as Michalek did during his final qualifying lap. Booher’s car is a blown alky combo so it was set to be a fun final round with the different engine combos.

Michalek completed his burnout and backed toward the starting line but Booher didn’t have that same experience. The reverser failed on his car and it had to be pushed back, all the while Michalek’s car was getting hotter and hotter as it idled near the staging beams. After hastily rolling the dragster back, Booher quickly staged. Sadly for Booher it literally went nowhere when he hit the gas, allowing Michalek to motor down the Summit lane on the race track and claim an NHRA national event victory in his first national event start. He also set a new personal best for ET and speed and his is quicker than his brother Kyle has been. That’ll be a fun point to rib the boys on when we see them next!

Not only was it amazing to see some guys we like win, it was amazing to see them do it through dedication, devotion to the sport, drive and determination. No one has handed this pair anything that they did not earn through hard work and sweat. They won the deal from Champion a couple of years ago and have worked hard to maintain it. They have put in the time learning to drive the car and working on crews to become better versed in how to operate a fuel burning dragster, and they won the first NHRA national event that Corey has ever driven the car at. Best of all is that they are good dudes who we’d love to sit in the pits and drink a beer with. I’m very happy for the brothers and I am happy that I’ll have this story to tell people for decades to come when they ask me about the coolest stuff I have ever seen at the races. 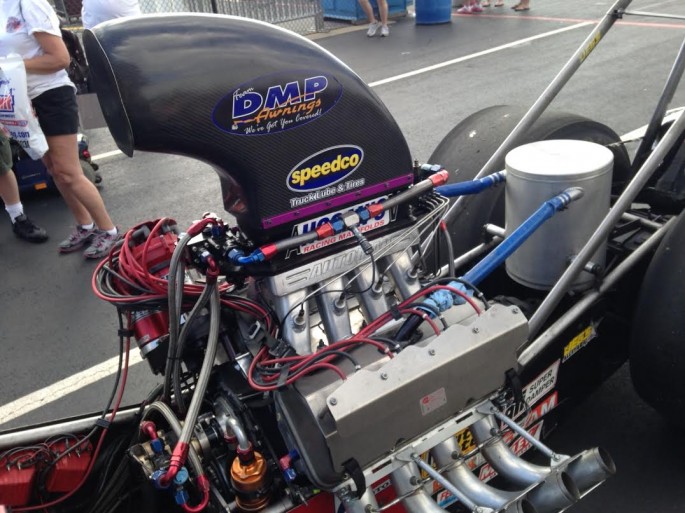 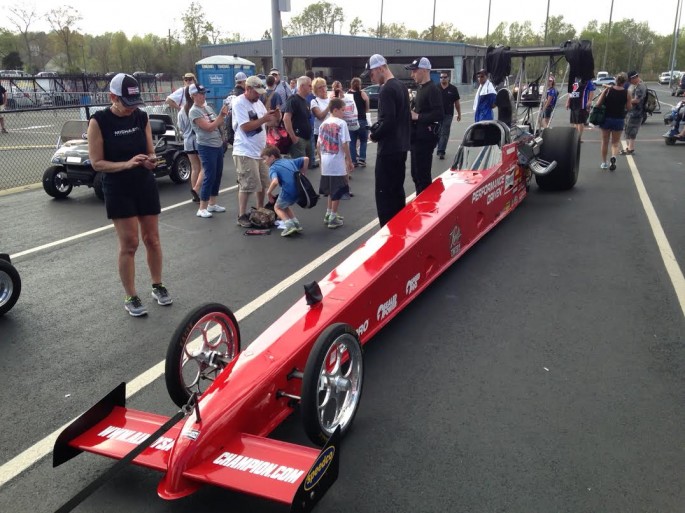 Registration Open For Eight Remaining USCA Events In 2014 - Race And Hobnob With BS Sponsors Like Lingenfelter, RideTech, and Jet Hot Funny Video: This Three Wheeled Mustang Is Your Daily Moment Of Automotive Stupidity