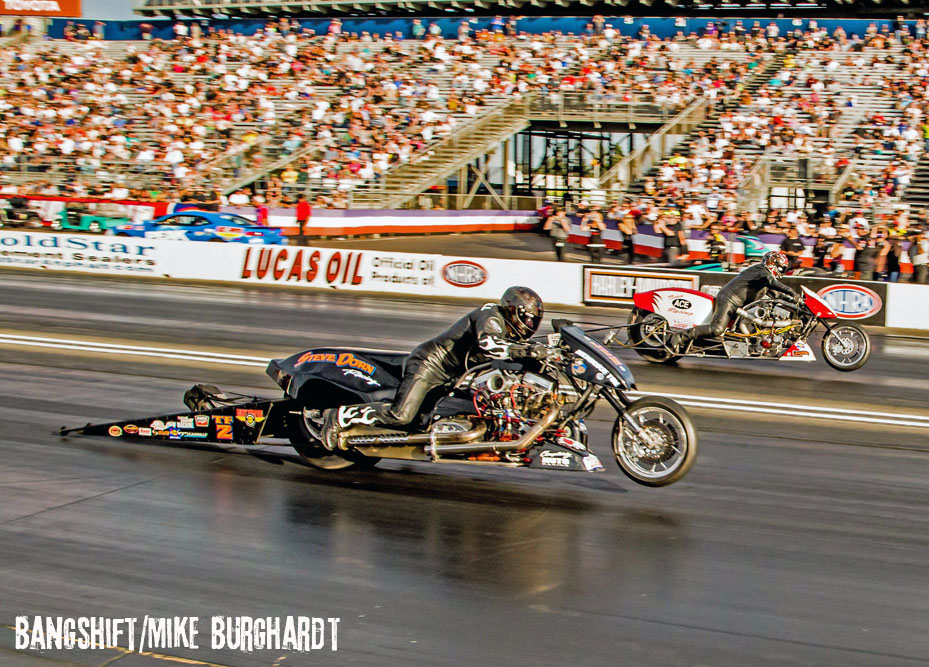 In Top Alcohol Funny Car, reining National Champ Jonnie Lindberg raced to the event win while Top Alcohol Dragster driver Shawn Cowie returned to the national event winner’s circle for the first time since 2013 as they each scored Winternationals wins. 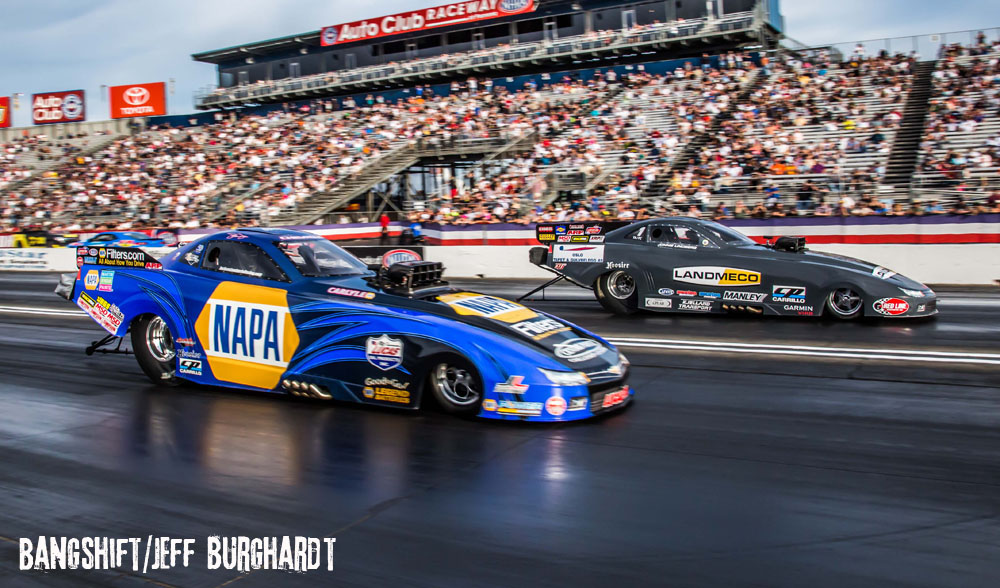 Lindberg (far lane), out of Sweden, opened the 2016 season as he did during his 2015 championship run taking the win here at historic Auto Club Raceway edging out John Lombardo Jr., in a classic 1-2 final round as both drivers qualified at the top of the field.  Lindberg grabbed his third national event win driving his Chevy Monte Carlo to a 5.423 second lap at 271.90 mph to nip Lombardo’s 5.456, 272.31.  Lombardo in his NAPA-backed funny car was looking for his eighth straight round win here in Pomona having won the 2015 season ending Auto Club NHRA Finals last November. 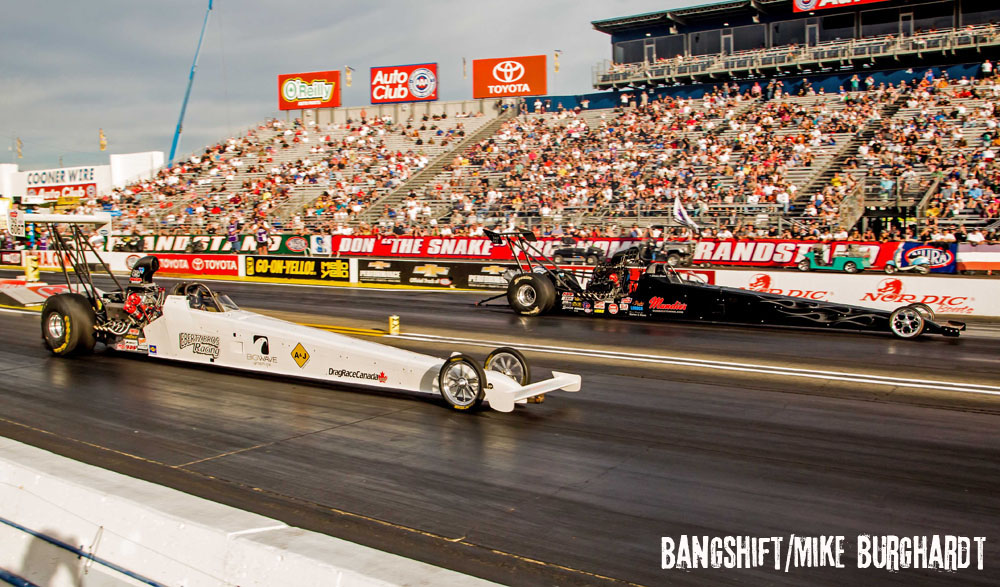 Cowie (far lane), from Surrey, B.C., saved his best pass of eliminations for his final round match up with fellow Canadian and No. 1 qualifier Don St. Arnaud of Edmonton, Alb.  St. Arnaud got the slight advantage off the line but Cowie quickly took the lead and raced to a 5.314 second lap at 272.23 mph. 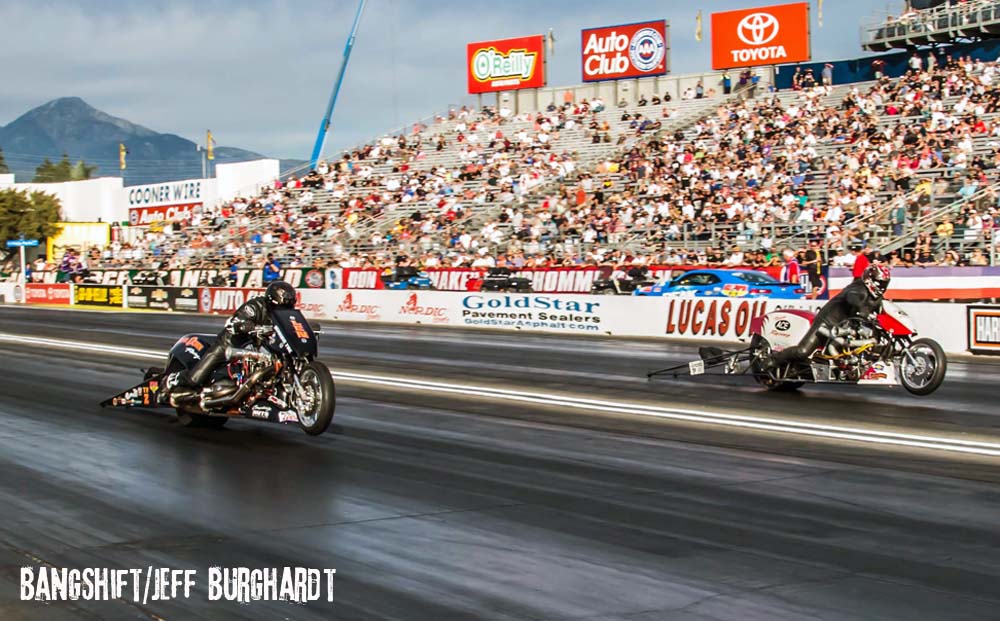 Vancouver, Washingon’s Len Darnell (near lane) won the Top Fuel Harley class running a 6.435, 218.16  defeating Kevin Boyer, Boyer’s bike kept moving to the right as he tried to shut it down, taking out the 660-foot timing reflectors crossing the Centerline and fouled out.  Darnell swept the table in the NHRA Harley-Davidson Drag Racing Series by taking both the number one qualifying spot and the event win on his ’14 Harley.

Four SoCal racers also took home a Wally; Robert Naber, Doug Lambeck, Steve Williams and Jimmy DeFrank all won out of Southern California with Naber advancing to the final round in both Super Comp and Super Gas, looking for the exclusive double up. 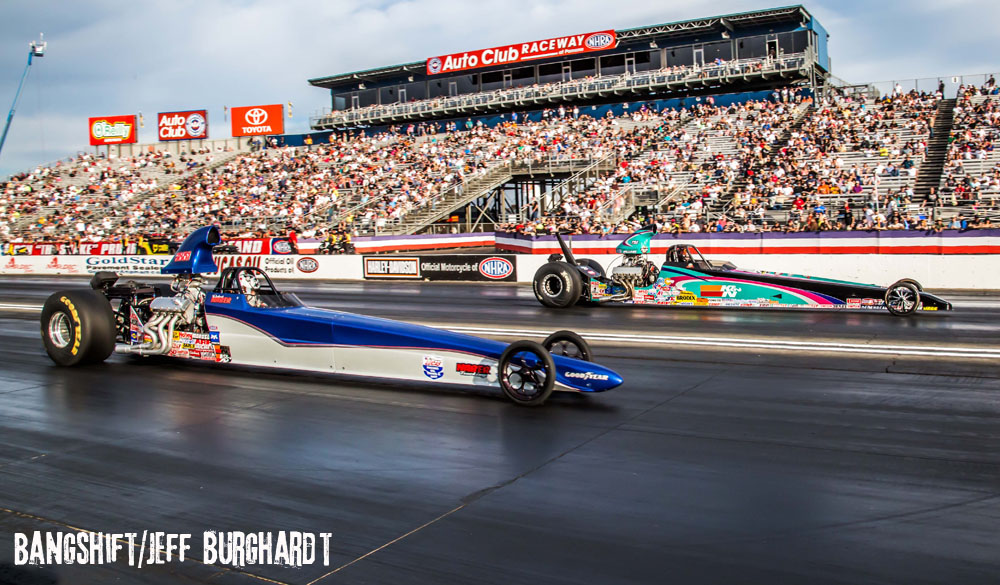 Naber, Ontario, Calif., met up with Williams, Beaumont, Calif., in Super Comp with K&N Filters’ Steve Williams (far lane) quickly ending Naber’s double up hopes, taking the win on a double breakout.  Williams took the early lead with a .003 second reaction time and held on for his 10th win at the national event level. 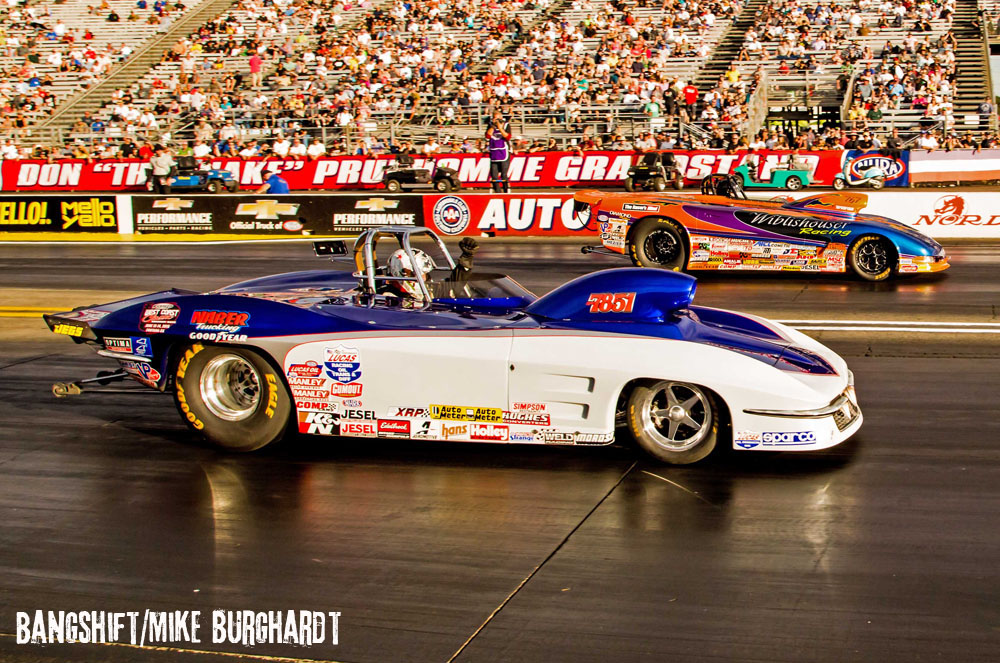 Then Naber  jumped out of his dragster and quickly returned to the starting line to face off with Mike Wiblishouser in Super Gas with his ’63 Corvette.  Naber (near lane) had no intention of going 0-2 on the day, posting a 9.901 second run on the 9.900 index for the win and his fourth NHRA national event trophy. 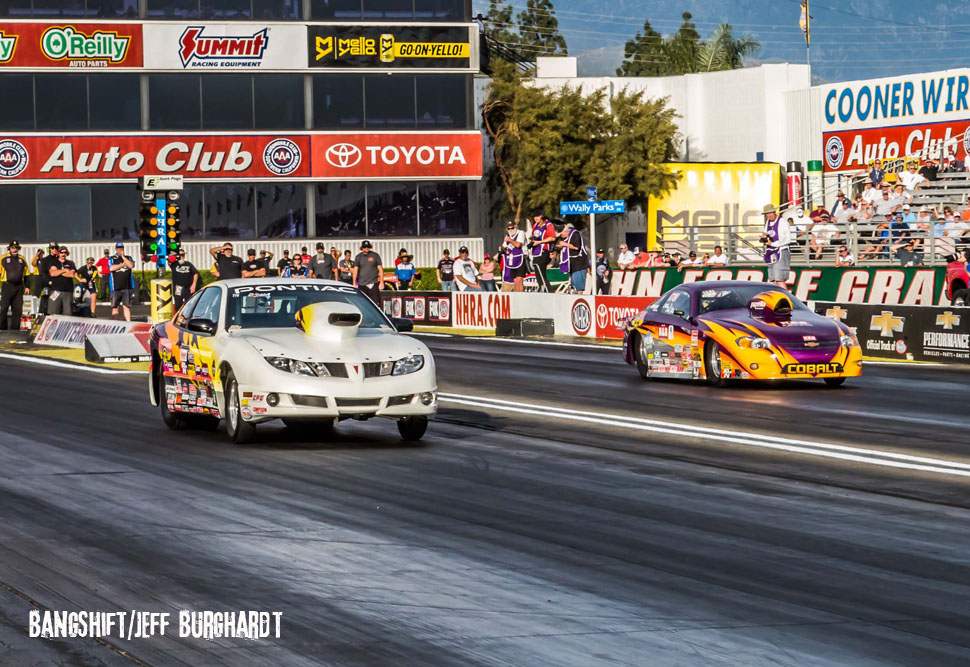 Perennial NHRA winner Dan Fletcher was in search of his second career double up as he knocked out Don Little in Stock Eliminator for his 95th national event win before taking on Doug Lambeck (near lane) in Comp Eliminator.  The New York racer has 16 wins in Comp but will have to wait for 17 as Lambeck, Irvine, Calif., scored his 11th running 8.406, 158.61 to hold off Fletcher’s 8.027, 167.55.  Lambeck’s dad Bob won the NHRA Winternationals in Stock Eliminator back in 1983. 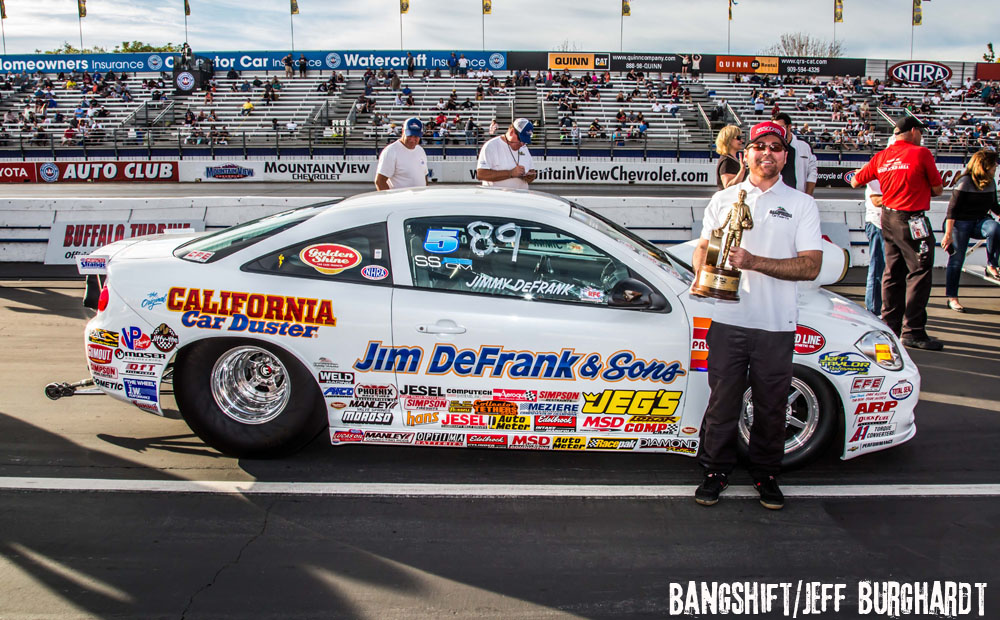 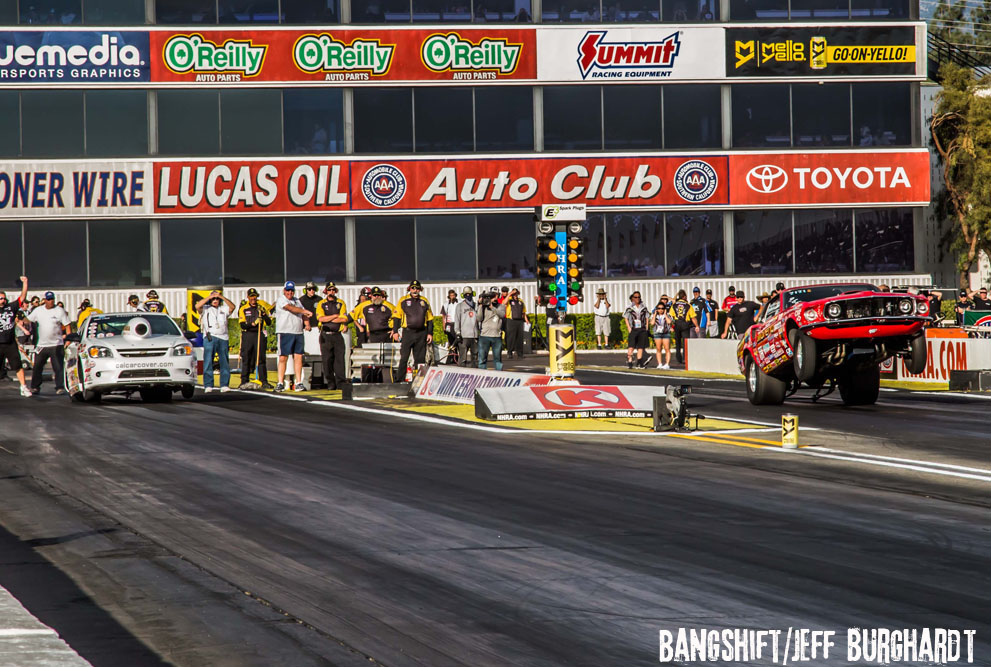 Most of these racers will head to Wild Horse Pass Motorsports Park for the next CARQUEST Auto Parts NHRA Nationals, February 26-28.

The following are the final results from the NHRA Lucas Oil Drag Racing Series and the Circle K Winternationals at Auto Club Raceway at Pomona: 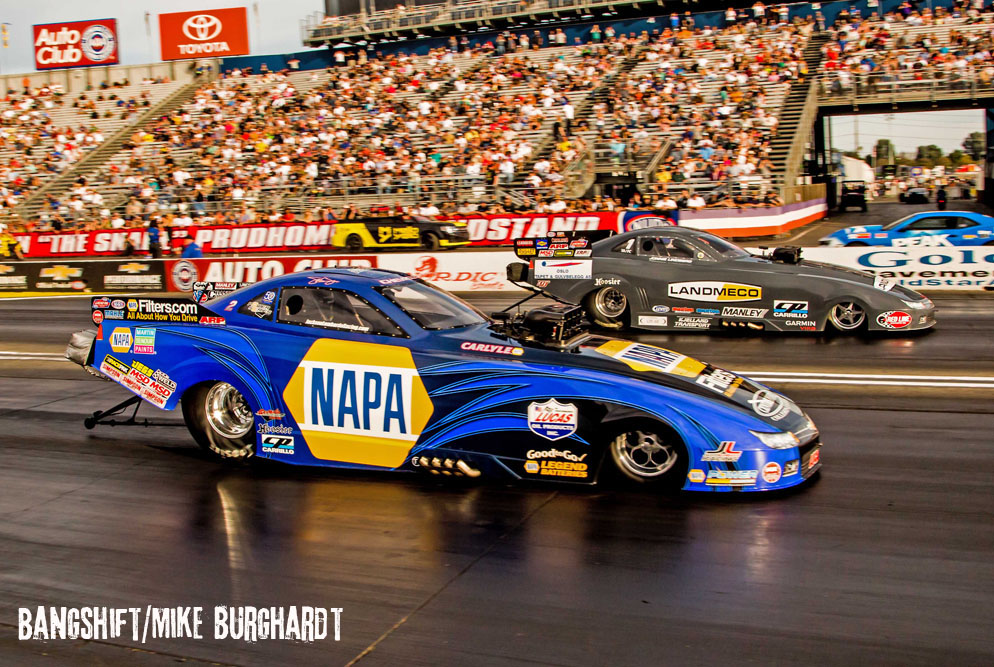 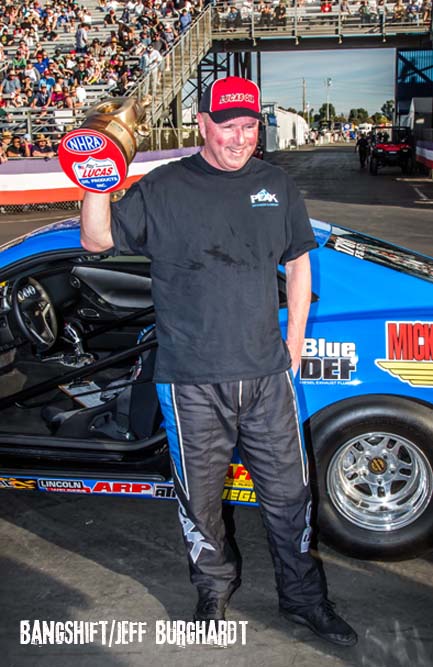 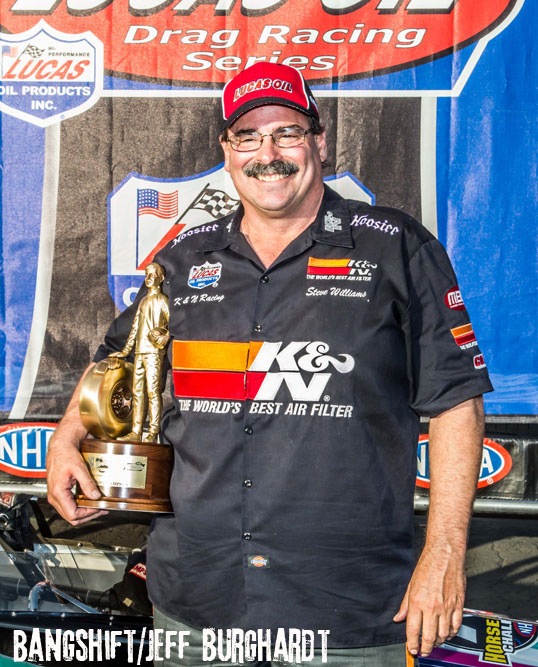 The Good Vibrations March Meet Is On Schedule! Fire Be Damned, We're Ready To Race! The Cobra Jet Mustangs Are Coming! And We Have Photos Of The Final Cars Coming Together!