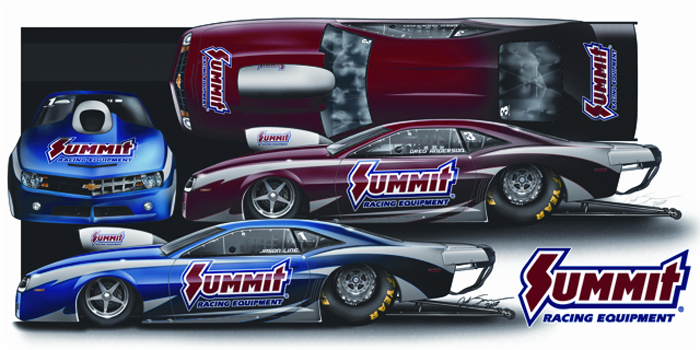 Check it out folks, Greg Anderson’s new Camaro NHRA Pro Stocker is almost ready for it’s debut! Well, not quite, but it looks almost ready according the photo we have! RJ Race Cars is putting the final touches on the car as we speak and is almost as far along on Jason Line’s new Camaro as well. Testing will happen at their “test facility” otherwise known as Mooresville Dragway in Mooresville, North Carolina which is close enough the shop for Greg and Jason to tow the cars with a golf cart. (Literally. We know they do it, trust us.) Once both cars have been thoroughly tested, you can expect to see them at an NHRA National Event near you, and we can’t wait. Line says he is excited because “For the first time in my Pro Stock career I’ll finally be driving a real muscle car…”. We couldn’t agree more. Bring on the Camaro vs. Mustang battle in Pro Stock! 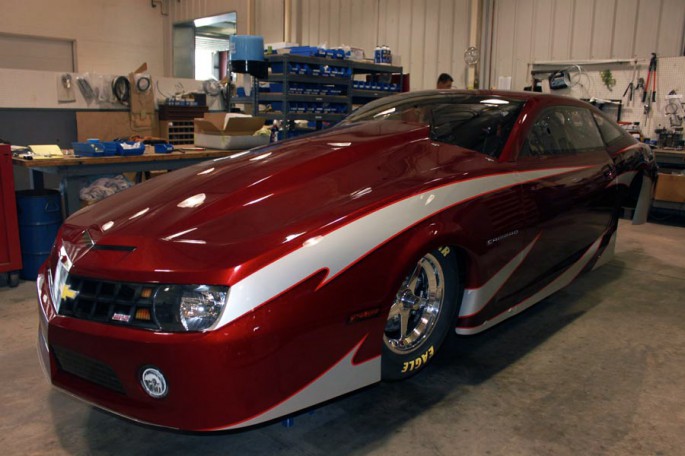 The two drivers showed off the rendering of their new cars April 21 at Super Summit 2012, Summit Racing’s one-day open house at the company’s retail/warehouse location in McDonough, GA.

“We’re excited to give the Summit employees and race fans a sneak peek at what their new hot rods will look like,” said Anderson, a four-time NHRA Pro Stock champion. “I think people will be a little surprised at how different the Camaros will look from our current cars.”

“I’m excited by our move to the Camaros,” added Line, the 2011 Pro Stock champion. “For the first time in my Pro Stock career I’ll finally be driving a real muscle car, and I think the fans are really going like our new look, which is completely different from anything else we have ever run. It was fun to reveal the paint schemes to everyone, and will be even more fun when we get our Summit Racing Camaros out on the racetrack.”

LUCAS OIL Top Comp Rolls into Vegas for the PSCA Las Vegas Nationals This Weekend The Somernights Cruise Series Begins This Weekend - Be There!