Ron Capps Gets a New Crew Chief: Rahn Tobler to turn the screws after restructuring at Don Schumacher Racing.

Apr 06, 2012Chad Reynolds1320 NHRA NewsComments Off on Ron Capps Gets a New Crew Chief: Rahn Tobler to turn the screws after restructuring at Don Schumacher Racing. 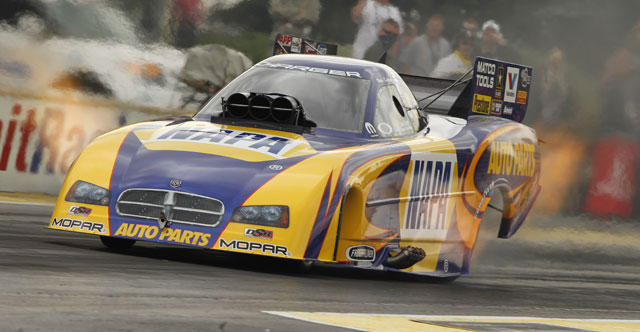 BROWNSBURG, Ind. – Rahn Tobler has been named crew chief for the NAPA AUTO PARTS Funny Car of Ron Capps effective immediately, team owner Don Schumacher announced Wednesday.
Tim Richards resigned from the position on Saturday night after the NAPA Auto Parts Dodge Charger R/T failed to qualify for Sunday’s championship elimination rounds of the SummitRacing.com NHRA Nationals at The Strip at Las Vegas Motor Speedway. Richards took the position after four of 22 national events last season and tuned Capps to national event wins in Sonoma and at the fall Las Vegas race.”I understand the complexity of our race cars and how challenging our sport can be,” Schumacher said.

“But when something occurs like what happened to our NAPA Auto Parts team at Las Vegas, what is paramount is that we work immediately to find the problem and correct it. We owe that effort to NAPA Auto Parts and other associate sponsors on the car.

“I have tremendous respect for Tim and appreciate what he did last year to help Ron win two NHRA titles. I wish Tim the best. The commitment to our marketing partners is we will do whatever is within our power to win and compete on a championship level.”

Tobler also will be the lead tuner for Beckman’s team for at least the next two Full Throttle events as Smith transitions to his new position.

“Rahn will help Todd get adjusted to the Valvoline NextGen team and become acclimated to our DSR operation,” Schumacher said. “Rahn will make the final decisions for at least the next two races.

“We have a strong enough organization that we can assist Todd, but it wouldn’t take him long to become familiar with DSR and the Valvoline team; he has plenty of background in our sport.”