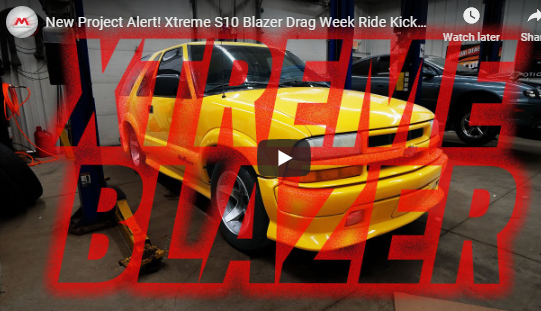 Before too long everyone at Motion Raceworks is going to have a car ready to run on Rocky Mountain Race Week and Drag Week! They’ve been getting Novas and GTOs ready and now it’s time for the S10 contingent to get some more love. The guys at Motion have been building S10 parts for some time, but the are putting even more work into them and using this test bed to develop new parts, give tech lesson on their Tech Tuesday video series, and more. Plus it’s going to be rad and fun! What’s not to love about that? I mean isn’t that enough reason to build something? We think so, and so do they and since we have our own S1o Blazer project in the works it will be fun to have both of them out there running the Motion M on the side and having some wheelstanding fun at the drag strip.

In this video the guys introduce the project, argue about how much it weighs, how much it will weigh, talk about getting skinnier themselves, and overall have some fun tearing into the new project. I LOVE this video because most of it happened while Doug and Andy were on Rocky Mountain Race Week a few weeks ago and it gives you an awesome look into the other guys of Motion Race Works. I am super glad to call these dudes friends, have a great time traveling to events and shows with them, and can tell you that I laughed a bunch while watching this one because it reminds me of every time I’m with them.

So, watch the video, have fun, and be inspired!