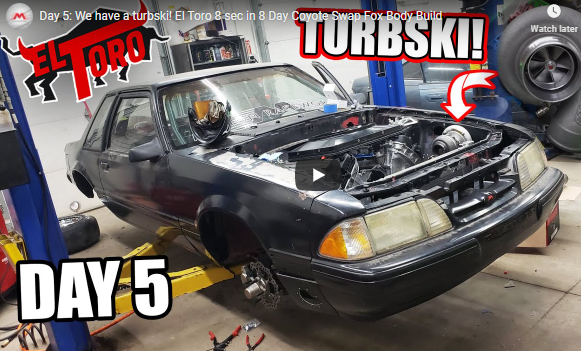 Can they pull it off? An 8-second quarter mile capable car in just 8 days? I think they can and with 5 days down, the boys are making headway. With the talent and resources these guys have they clearly have what it takes to make the build happen, but regardless of all that you still need to make it happen and building a car in 8 days at any level is a feat, let alone a car that can get down the race track in just 8 seconds. This is going to be rad.

I’ve been part of a team that built a car in just 48 hours, and I’ve been part of a team that twice built an 8 second car in 10 days, and both required a lot of planning. The task of building something like this in such a short period of time is both epic and crazy, but it sure can be one of the most stressful fun things you’ll ever do. The guys at Motion Raceworks have supported our $10k Drag Shootout efforts twice, and since we weren’t in the competition this year I think they felt like they needed to do something fun and exciting on their own. So they decided to build an 8 second car in just 8 days. Think you could do it? These guys have a bad assed shop, with some bad ass tools, and a talented crew, so I think they can pull it off.

The cool thing about it, is that they are doing a video each day of the build and that means you get to follow along and see what they are doing and how they are progressing. I’ll let you know that taking the car apart took more work than they thought it would, so they got behind on day one. Will they catch up and make it to their goal?

It's The FinalFinal Day Of FREE LIVE Streaming From The Spring Fling Million!$30k Saturday Spills Over To Sunday! Holley Intergalactic Ford Fest 2020: Welcome To The Blue Oval's Burndown!