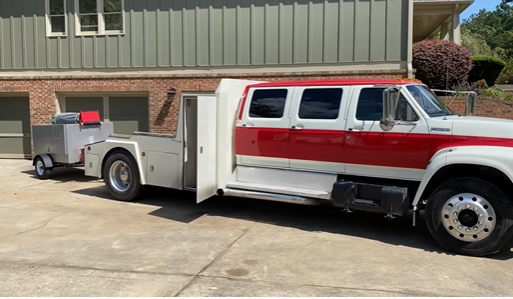 When something is going smooth for Finnegan and Dave it always seems like something else is going, well, not so smooth. Such is the case with trucks, and trailers and well Blasphemi in this particular case. Watch the latest from Finnegan as he fixes the trailer and the car, breaks stuff, trades stuff, and ends up with all kinds of new things. Oh, and there is still more stuff available for sale or trade. We’re talking trucks, the boat, and more!

In this episode you’ll learn how they made the Rocky Mountain Race Week/Drag Week trailer better, how they made the 6-door faster before getting rid of it, what they trade it for, and more. It’s an episode that will make you both happy and sad.

Here is what Finnegan has to say about this episode.

This trip was so good that we had to split the video into two parts because so much stuff happened. First off, here’s a little life update; We filmed this back in September but didn’t get time to edit and upload the video until now. Immediately after filming our trip to Rocky Mountain Raceweek 2.0 (which is not in the Rocky Mountains), we left town to film Roadkill and Faster With Finnegan and we still aren’t done filming those shows so we are working on Finnegan’s Garage edits in our spare time. Anyway, since September, a lot has happened. I’ve bought a new enclosed ramp truck, which you’ll briefly see in this video, I’ve traded away the six-door Ford F650 for a ’66 Chevy Suburban, which you’ll also see in this video, too. We also had a small shift linkage issue in Blasphemi during Rocky Mountain Raceweek 2.0, which resulted in a major engine failure-again, it’s in this video. With any luck we’ll upload Part 2 of the video next week. In that video, you’ll see the rest of the road trip and you get to see my wife cry when I surprise her on our 15th wedding anniversary. 🙂