Studezilla: “This Is The Most Bad Ass Thing I’ve Ever Stepped On The Gas In.” Scott Palmer 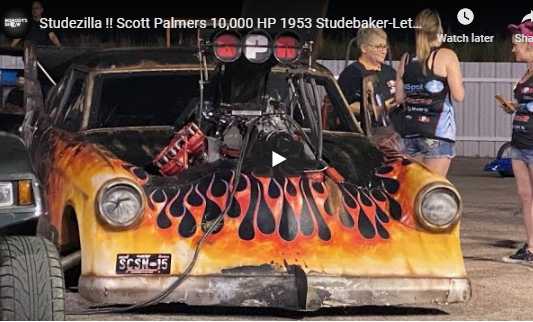 Our friend Chad Ehrlich is a guy that has a pretty cool business selling old cars and trucks, and he’s also friends with some pretty cool guys from the midwest. Scott Palmer, or Scotty to those of us that like to hang out with him, happens to be a very longtime friend of Chad’s and when they were hanging out together recently at the track Chad decided a walk around the famed Studezilla Top Fuel Pro Mod would be a good idea. Of course Scott was all for it, and you gotta here the things he said about this insane, in all the right ways, hot rod.

We didn’t make up the title of this one for click bait, its exactly what he said, along with the fact that the car is stupid, crazy, etc. We love Scotty, have been fortunate to call him a friend for several years now, and always love the funny stuff that comes out of his shop and his mouth. This video is no different, so if you want a colorful walk around of the famed Studezilla Nitro burning Pro Mod, then this is the video to watch.

Remember, this thing isn’t just a Pro Mod car burning some low percentage. This car has a COMPLETE Top Fuel drivetrain in it. Same clutch, same can, same management, same everything. But the wheelbase is shorter than a Funny Car!

God bless your craziness Scotty Palmer, I love you because of, and inspite of it brother.

Rumor Mill: The Ford Maverick Is Returning As A Small Pickup Preparing For The Final Goodbye: Giving A Destroyed Dart Sport A Final Cleaning

6 thoughts on “Studezilla: “This Is The Most Bad Ass Thing I’ve Ever Stepped On The Gas In.” Scott Palmer”