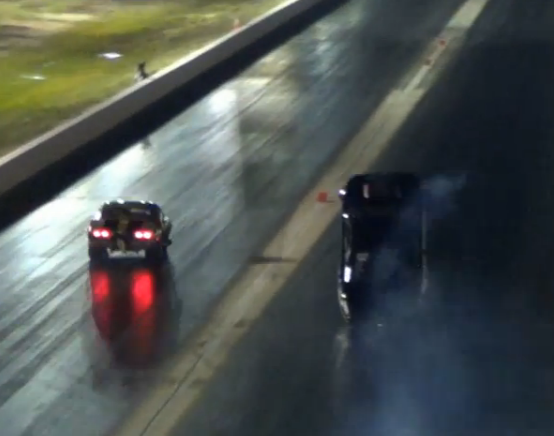 As we showed you yesterday, small tire drag racers are often walking a very thin line between tire spin and massive dead hooking wheelstands. As the racer you will see in this video found out, the wheelstand end of things can really make life difficult! This Mustang is raced by a guy named Andy Shows (we think) and as you can see from the video, it makes PLENTY of power. This video was taken at Memphis International Raceway during last weekend’s Outlaw Street Car Reunion, an event that was a smashing success and is sure to draw an even bigger crowd of cars and spectators next year.

The math is largely the same in other big mondo wheelie videos we have showed you in the fact that we have a ton of power, this time being provided by a big nitrous engine of unknown make, model, and displacement to us. You can see that on the hit of the throttle, things aren’t looking too bad for the Mustang but when the car reaches the 60′ cone, the nose starts to rise and rise fast. At that point you can actually see the car get pedaled because the nose starts to dip but unfortunately when the driver gets back in the power, the car climbs like there is a thruster on the oil pan. The really bad news is that the car was headed for the centerline and Shows must have felt it because he dumped the throttle and the car landed like a ton of bricks. Being a seasoned racer, Shows avoided hitting the cones in the center of the track and actually did a masterful job of steering the car out oft he groove and off to the right to minimize any trauma to the racing surface. THAT is a pro move and shows a guy who was still driving his car and not freaking out inside it.

These things are spectacular to watch but we certainly understand that they have a price. We’ve got no evidence to show us 100% but we have to believe that the front end of that car has some bent and mangled pieces in it now. Hopefully stuff isn’t too messed up and the car will be back out soon. That’s a ride we’re sure Andy will never forget!