Feb 05, 2017Brian Lohnes1320 VideosComments Off on Zip Tie Drags Adventure Video – Emily Williams and Her Husband Buy A Nova And Make The Trip 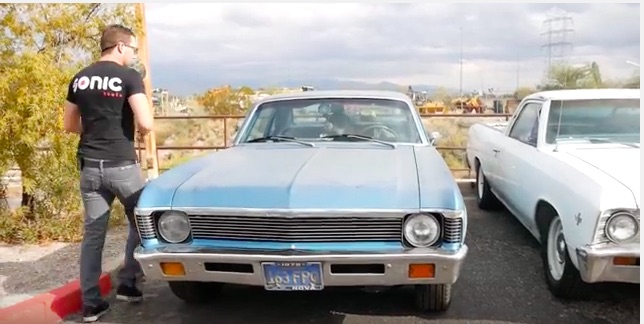 The Roadkill Zip Tie Drags were a big success with Tuscon Dragway being packed to the gills with fans and many Roadkill devotees making the run from Southern California to the Arizona track. People came from all over the country to have fun including our pal Emily Williams and her husband. Being that they live in the middle part of the country and wanted to keep their schedule tight, they devised a plan to fly out to California, buy an old car, hit the event and then have their buddy who is in the car business sell the thing.

They scored a pretty sun beaten but cool Nova. A basic car with a small block and an automatic it provided just enough in the lack of reliability department to make the trip and adventure and they had a blast, like thousands of others did at Tucson.

We have heard that the Zip Tie Drags concept will be spreading and growing across the country as based on the popularity of this first one. Following along on social media and now with this video it sure seems like the type of event that BangShifters would get into!

Watch Emily her husband and their Nova cruise to the Zip Tie Drags!