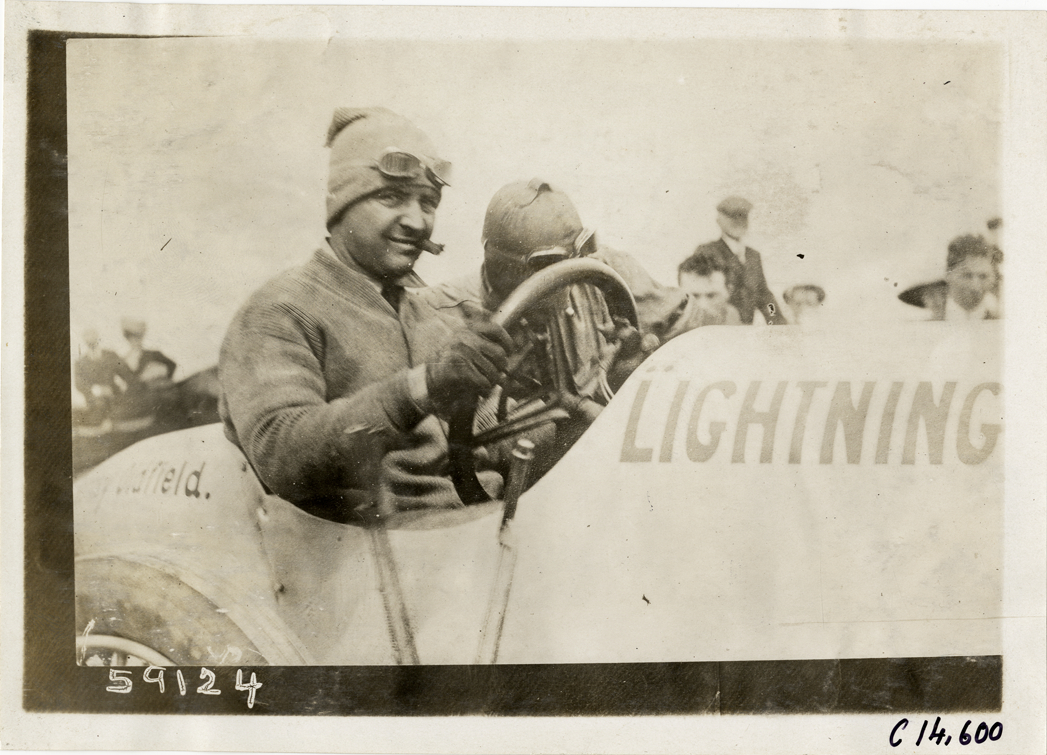 (Photo credit: DPL Digital Collection) – While the Bonneville Salt Flats rose to prominence quickly after 1914 as the premier place to go really fast in America, it was by no means the first place that people dropped the hammer and ran their machines to their outer limits. Ormond Beach in Florida was one of the places people chose to come out and set speed records. Year after year they went faster and faster and the tradition held between the years of 1903 and 1910. While roads were bumpy, hilly, and curvaceous, the packed sand of the beach provided a smooth surface for some of the bravest men on the planet to stand on the gas in their rudimentary cars with power plants sometimes sourced from airplanes, sometimes motivated by steam, and sometimes built as factory one-off specials.

The photos you will see below all date from the period of 1906 through 1909. Consider this the first installment of the “Before Bonneville” series because we have a LARGE number of these photos to share with you. We’re going to provide captions so you know who is in them and what they are driving. It is amazing that more guys were not killed out there on the sand running these insanely basic cars at speeds up over 100mph. We’re talking chain drives, hand brakes, and steering systems that make 50 year old farm tractors look advanced. But they came back every year and went faster every year. More power, more aero, more speed.

Take a look at these photos, all taken years before Bonneville even thought about becoming the speed capitol of North America. 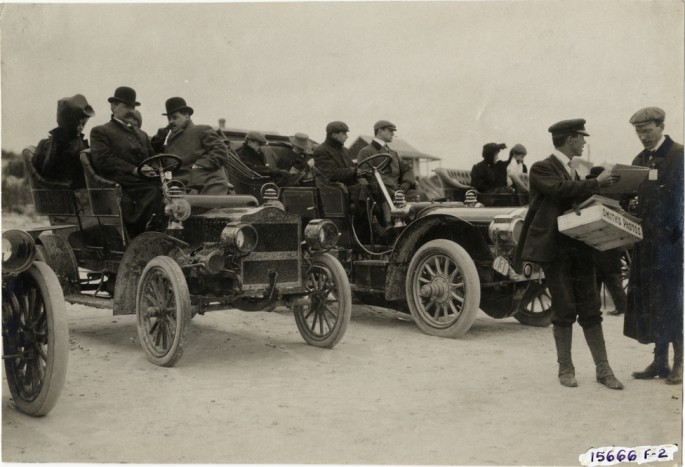 The car on the left is a Maxwell-Briscoe. The guys in the car? Well those guys are Mr. Maxwell and Mr. Briscoe. Cool, right? 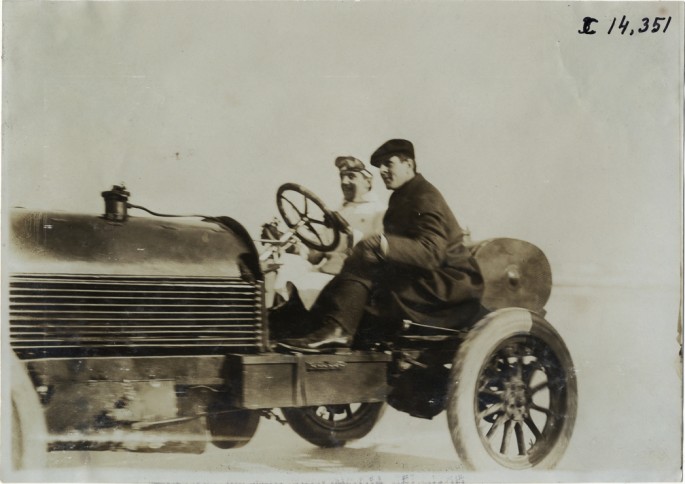 The guy in white is driver Arthur McDonald and he is piloting a 90hp Napier. The passenger? He’s just a guy with a death wish. No info on him. 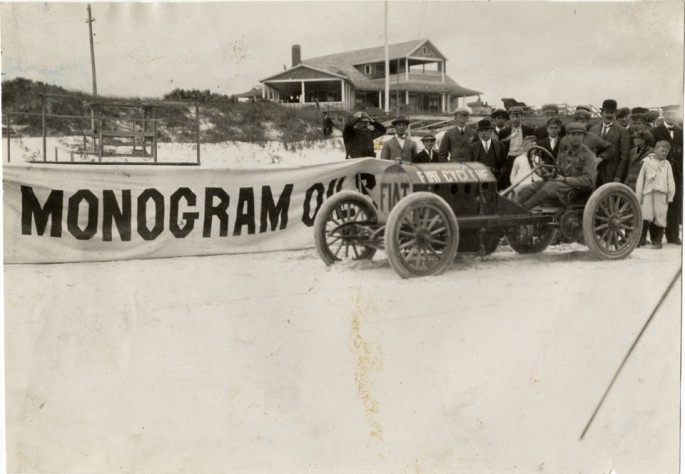 Here’s the 60hp Fiat Cyclone. This was at the beginning of the car’s life. I would be a racer for nearly a decade after and by the time it was done, this thing was used up. As good as it ever looked right here. 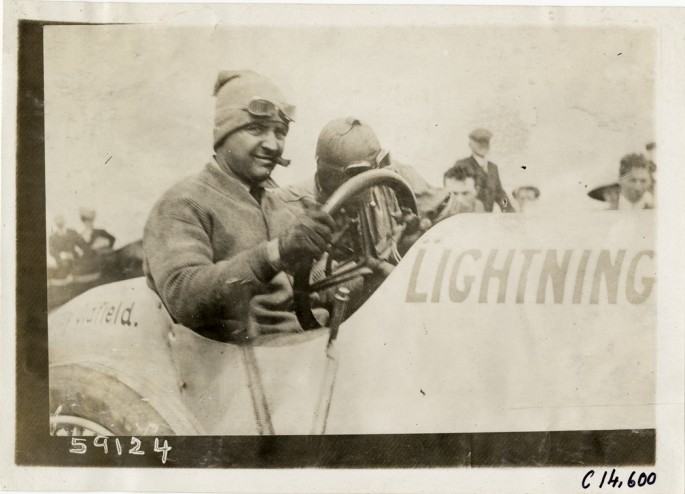 The man himself! Cigar chomping Barney Oldfield was an American racing hero of the highest order in the 1900s. Here his is being the wheel of the Lightning Benz, ready to attack the beach. 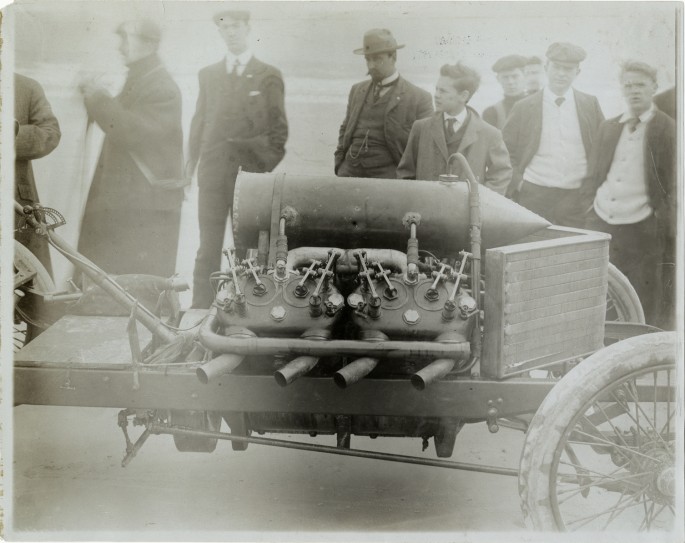 Here’s a photo of the mighty V8 that powered the Darracq race car back in 1906. This thing was literally all motor. Note the bare frame rails, steering column, and lack of, oh, EVERYTHING. 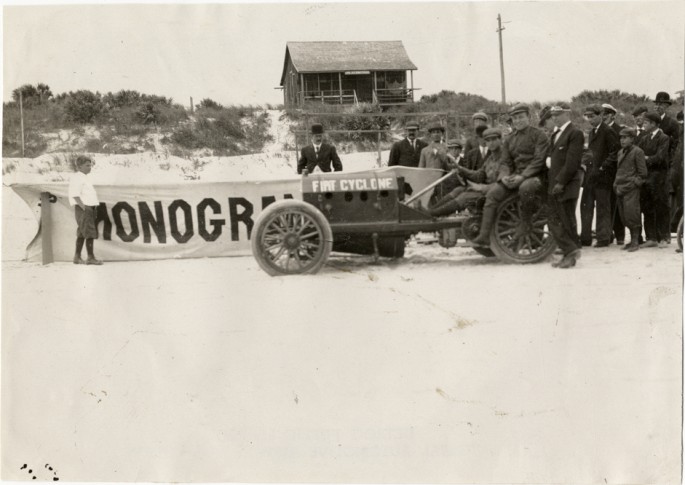 Here’s another shot of the Fiat Cyclone. While it was down on power as compared to many other monsters, it was much smaller and could lay down some speeds in the ballpark of the heavy hitters. 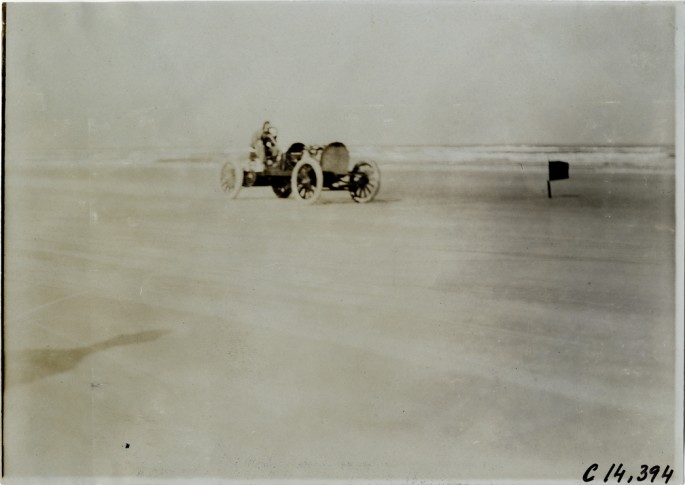 Driver EH Fredricks behind the wheel of a Mercedes race car in 1905. He was humping along pretty good in this photo. 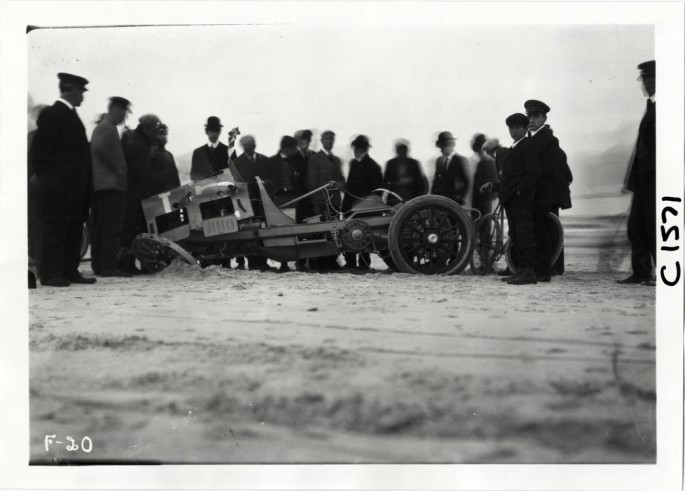 This was a powerful 75hp Simplex but with all these guys standing around it, the car is nothing but a busted wreck. No word on the driver. Yikes. 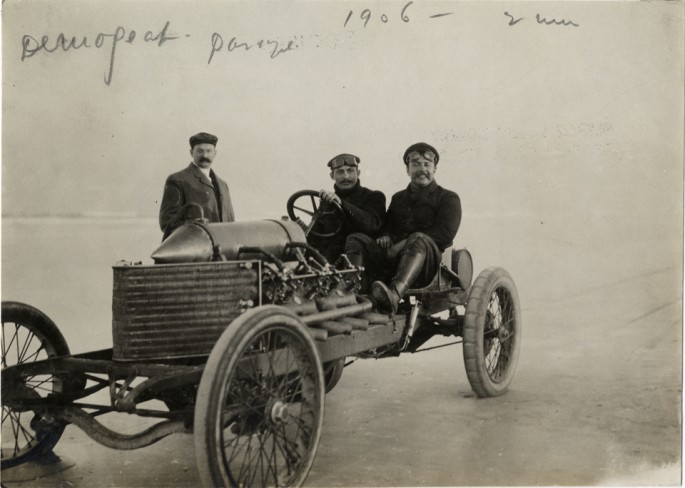 A frontal shot of the Darracq with its cool V-shaped radiator and happy driver and riding mechanic. 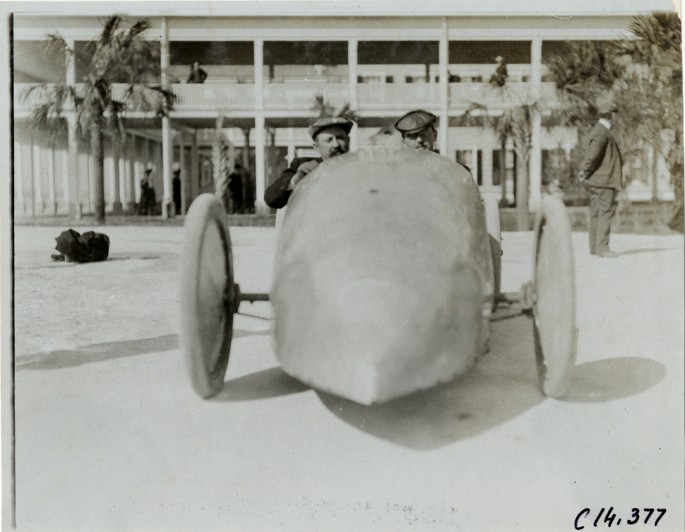 This missile shaped beauty is the Stanley Steamer entry that would run over 100mph on the stand. It was a radical departure from virtually everything else. 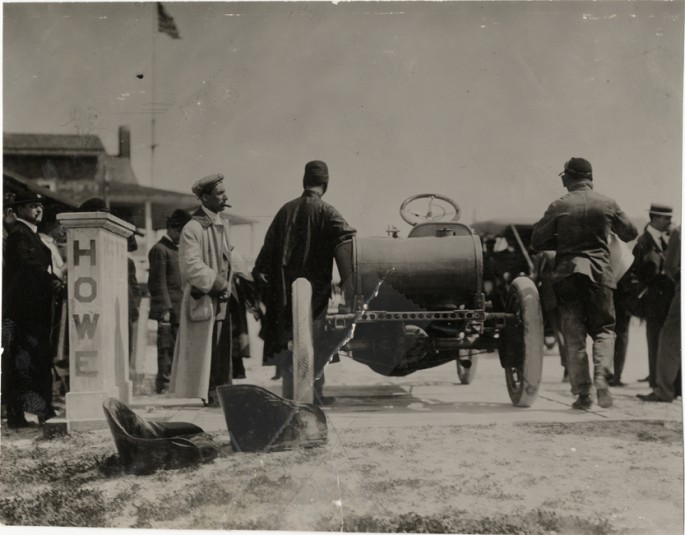 Driver Henry Levey and his guys weighing their Hotchkiss racer. Wonder if the rear fuel tank is full or empty? 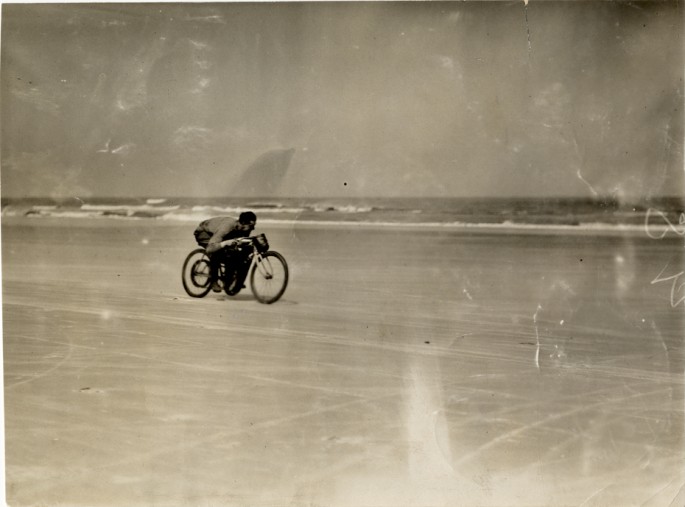 The fun was not just limited to cars. This motorcycle rider was getting after it in 1908. 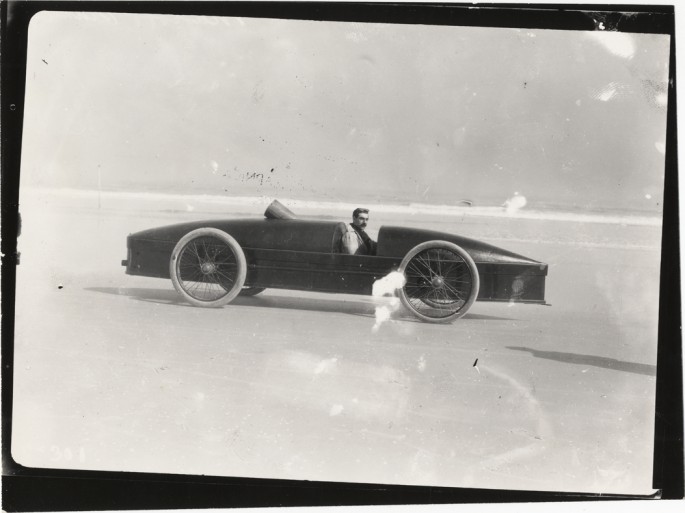 Here’s another shot of the Stanley Steamer racer that held steam records into the next century! 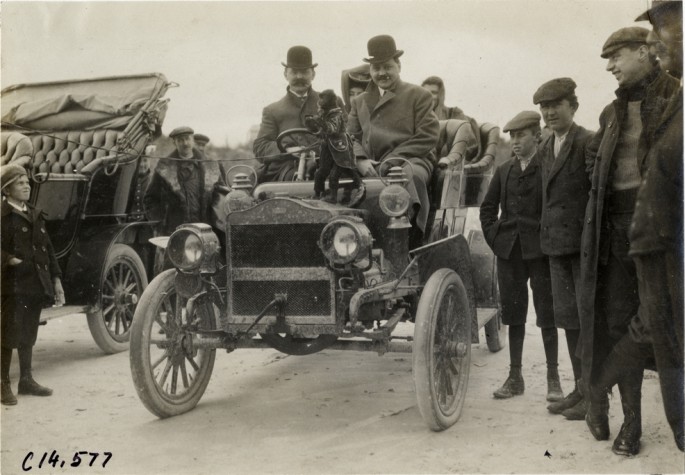 Note the fully dressed monkey on the hood of this freaking car. We know. Not speed related but c’anon?! 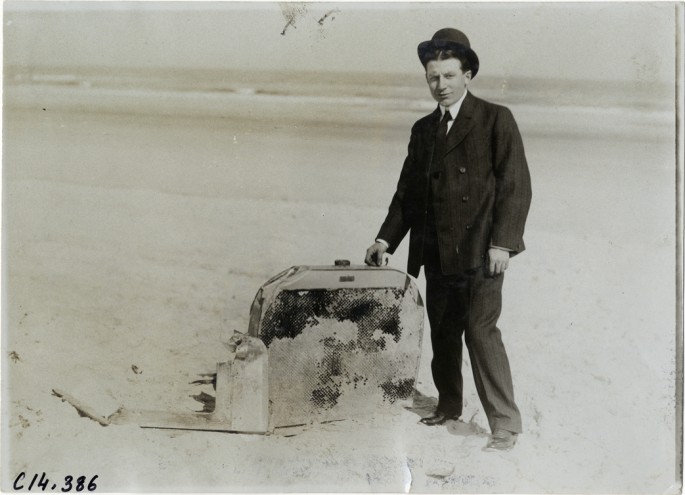 This 1905 photo features a well dressed guy posing next to a Simplex radiator that was obviously ripped from a car during a wreck. Egads! 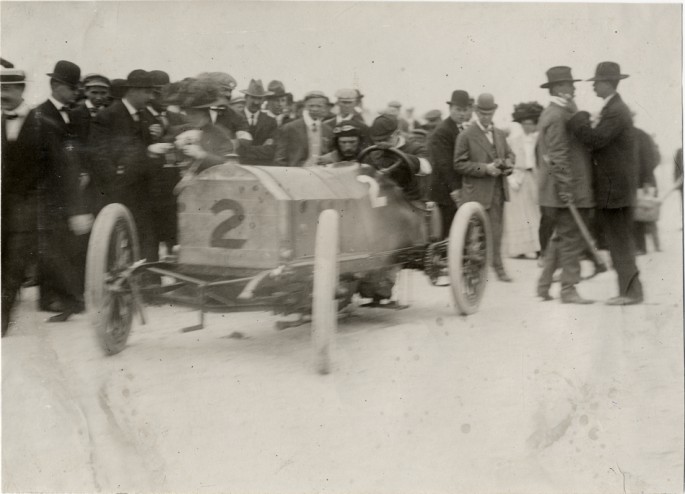 Here’s driver Sam Stevens and his passenger getting ready to take the Fiat racer out for a spirited run on the sand. 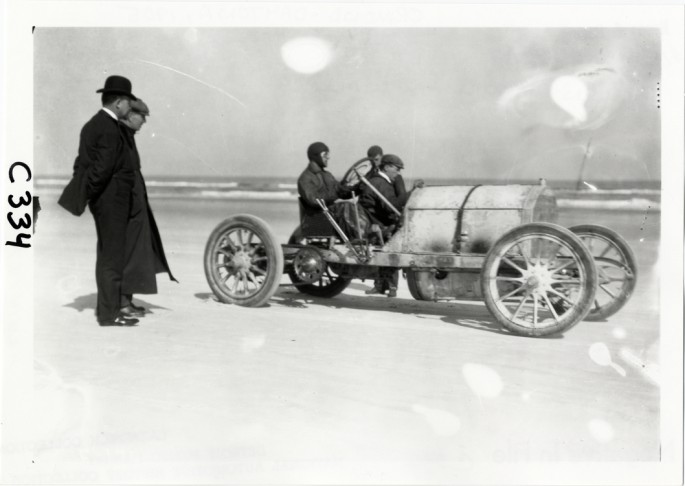 William Wallace is the driver and as usual, the passenger is unnamed in this photo. What are they driving? A Fiat. 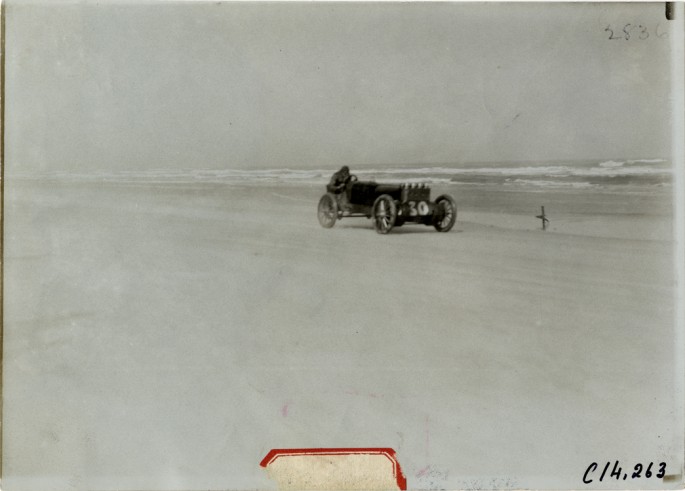 J. Walter Christie driving the car that bears his name, a Christie at speed on the beach. 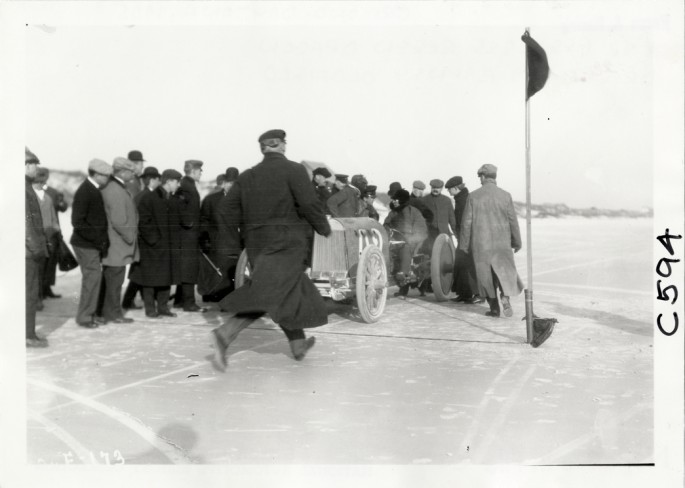 You can’t see him but Barney Oldfield is at the wheel of the Peerless Green Dragon which is the car in this photo. The image was taken at the 1905 speed trials.

Clench-Worthy: High-Quality Drivers Saving Their Hides In Sketchy Situations! Scrapple, Your Guide To The "meh"-Worthy News: This Week: He Bruised His What, Now?