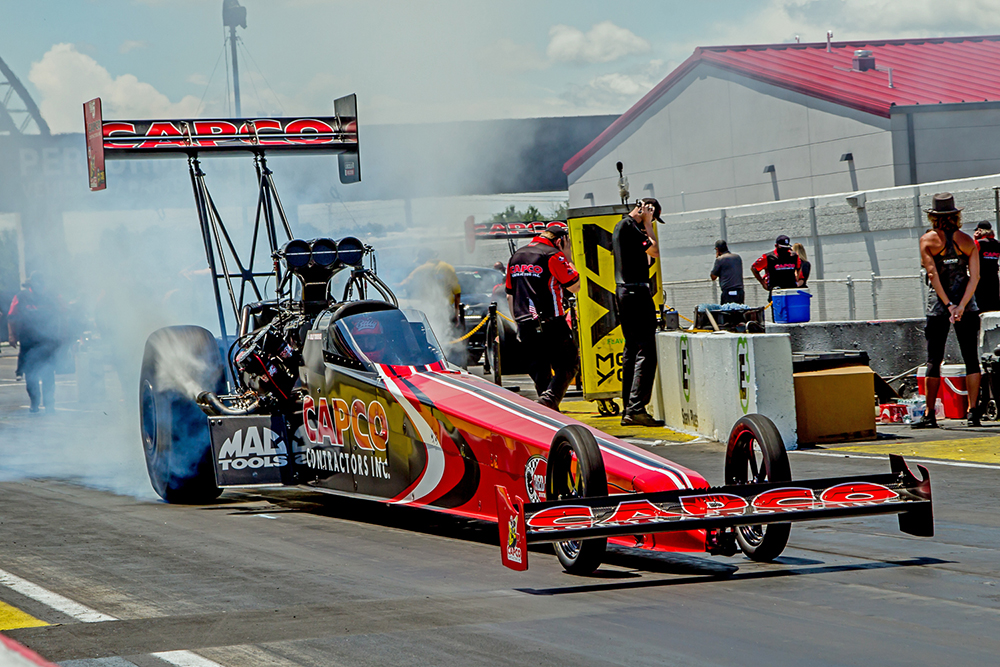 (Photos by Mike Burghardt) — Billy Torrence powered his Capco dragster to the Top Fuel win on Sunday as the NHRA Mello Yello Drag Racing Series raced for the first time since February at the E3 Spark Plugs NHRA Nationals at Lucas Oil Raceway at Indianapolis.

Facing off with points leader Doug Kalitta in the final round, Torrence went 3.802-seconds at 322.34 mph in his 11,000-horsepower Capco Contractors dragster to beat Kalitta’s 3.852 at 307.86 in a thrilling side-by-side race. It gave Torrence his first win in 2020 and sixth in his career. Torrence reached the final round by knocking off Terry Totten, T.J. Zizzo, and his son, Steve, the defending and back-to-back Top Fuel world champ. 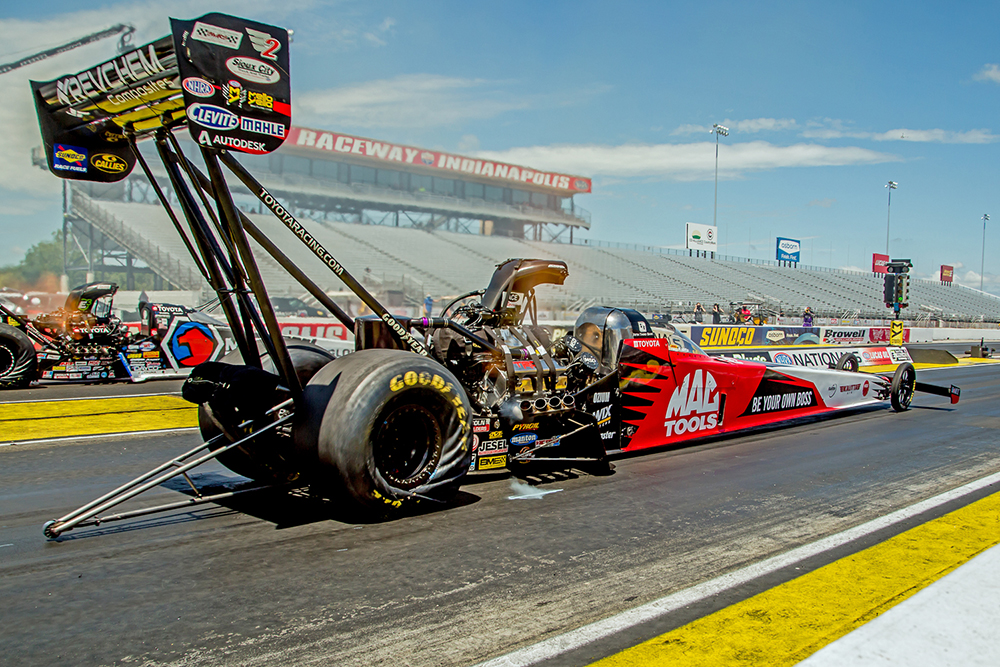 Kalitta (above) picked up round wins against Lex Joon, Leah Pruett and Antron Brown to advance to his 94th final round, also earning his 700th career round win. Kalitta has now advanced to the final round at every race in 2020.

Funny Car’s Hagan drove to his first win of the 2020 season in his 11,000-horsepower Mopar Dodge Charger SRT Hellcat, beating Don Schumacher Racing teammate Tommy Johnson Jr. in the final round with a 4.328 at 215.00. It gave the two-time world champ his 34th career win, and he advanced to his 61st final round thanks to victories against both Daniel and Tim Wilkerson, as well as DSR teammate and points leader Jack Beckman. 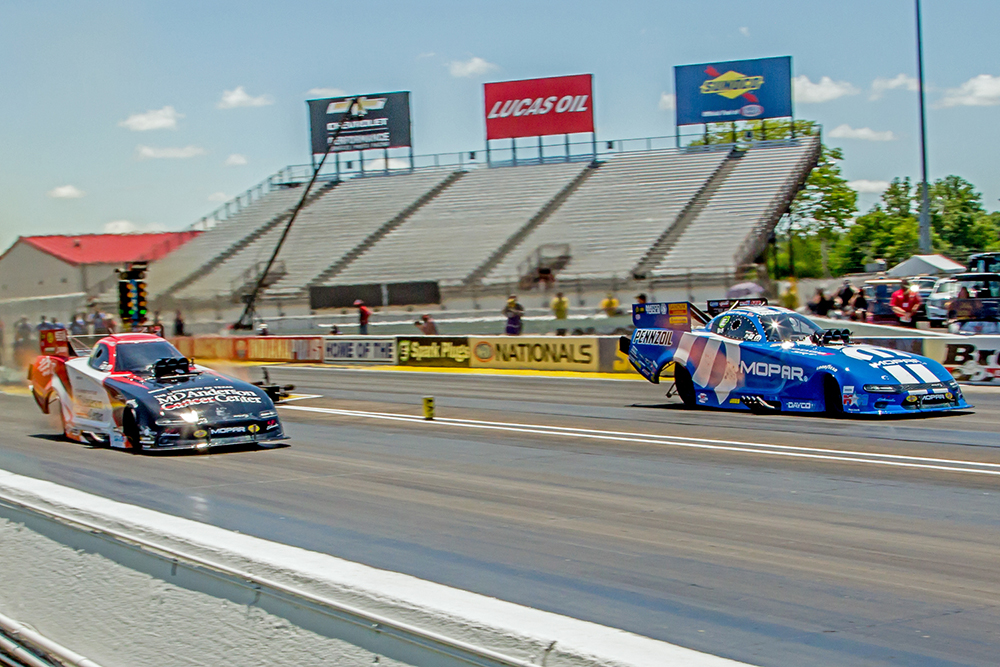 “We’re so glad to be doing this here with NHRA and fans in the stands,” Hagan said. “I can’t just say enough about NHRA and this team. These guys are my family and what an amazing job by my crew chief Dickie Venables. He’s dangerous when you give him a couple laps.”

Johnson, the No. 1 qualifier at the event, reached his 54th final round by knocking off teammate Ron Capps, Blake Alexander and J.R. Todd.

In a battle of retiring Pro Stock drivers, top qualifier Line knocked off No. 2 qualifier Jeg Coughlin in a thrilling final round, going 6.647 at 207.21 in his Summit Racing Equipment Chevrolet Camaro to slip past Coughlin’s 6.658 at 206.76. Line picked up his first win this season and 51st in his career, also extending his incredible streak to 17 consecutive seasons with a victory. Line’s road to the finals included victories against Alan Prusiensky, Alex Laughlin and KB Racing teammate Greg Anderson. 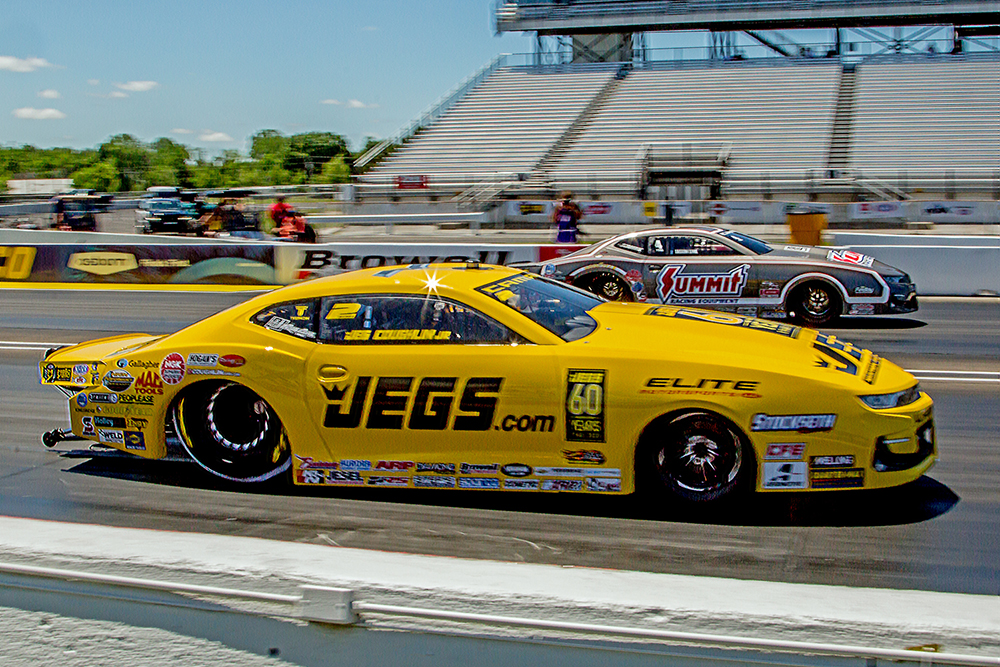 “I wish I could see my dad’s face because he’s big into streaks and it was very important to him that I win one race every race that I’ve done this, and we got it done today,” said Line, who has 104 final round appearances. “I want to thank Greg because he worked his tail off through all this to give us good stuff.”

Coughlin, who won the opening race of the season in Pomona and moved into the points lead, beat Bruno Massel, Chris McGaha and defending world champ Erica Enders to reach the final round for the 113th time. 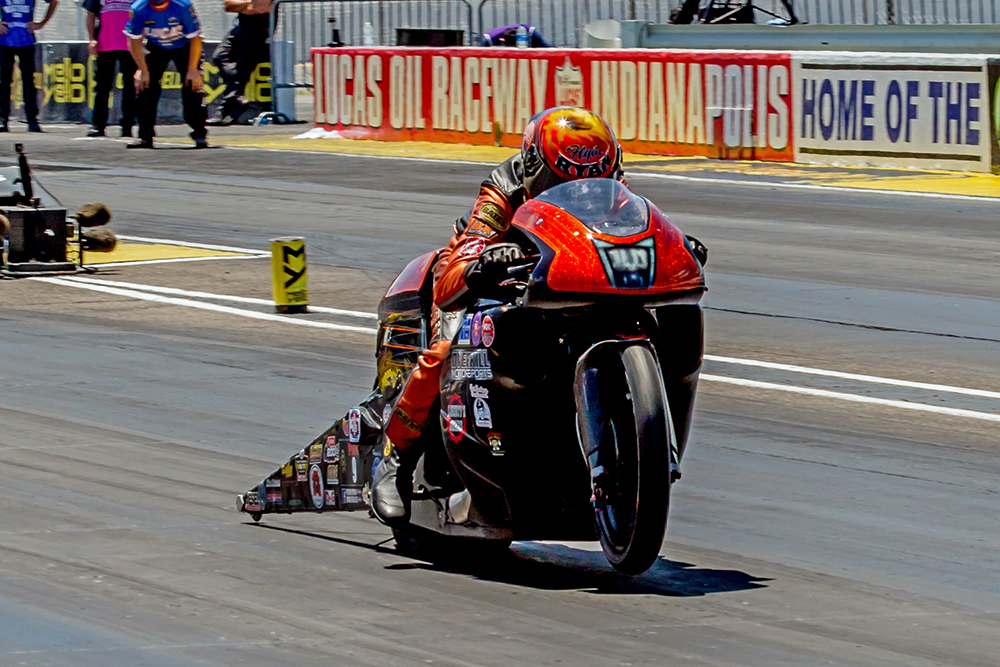 It was the perfect start to the Pro Stock Motorcycle season for Oehler, who won his first career NHRA race in his first final round, going 6.974 at 194.16 on his Flyin’ Ryan Racing/B&K Cylinder Heads EBR to defeat Matt Smith. After qualifying fifth, Oehler knocked off Marc Ingwersen, Scotty Pollacheck and Hector Arana Jr. to advance to the championship round for the first time in his career. He posted a remarkable .010 reaction time and never trailed en route to the biggest moment of his PSM career.

Smith, who qualified second, beat Chris Bostick, Angelle Sampey and defending world champ Andrew Hines to reach the final round for the 55th time. His 6.855 in the first round was the best for the weekend in the class. 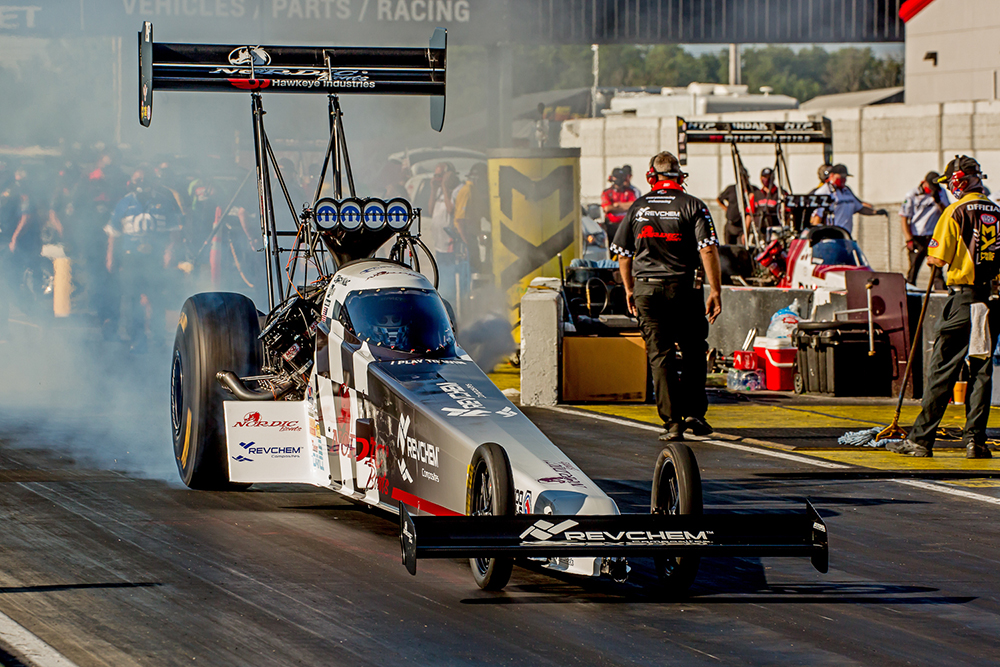 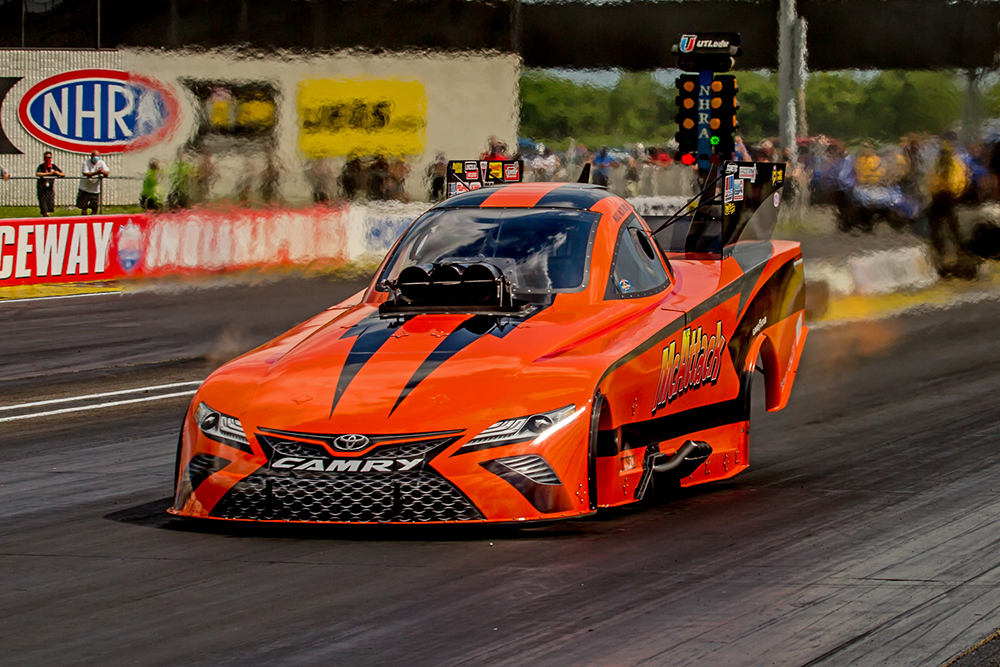 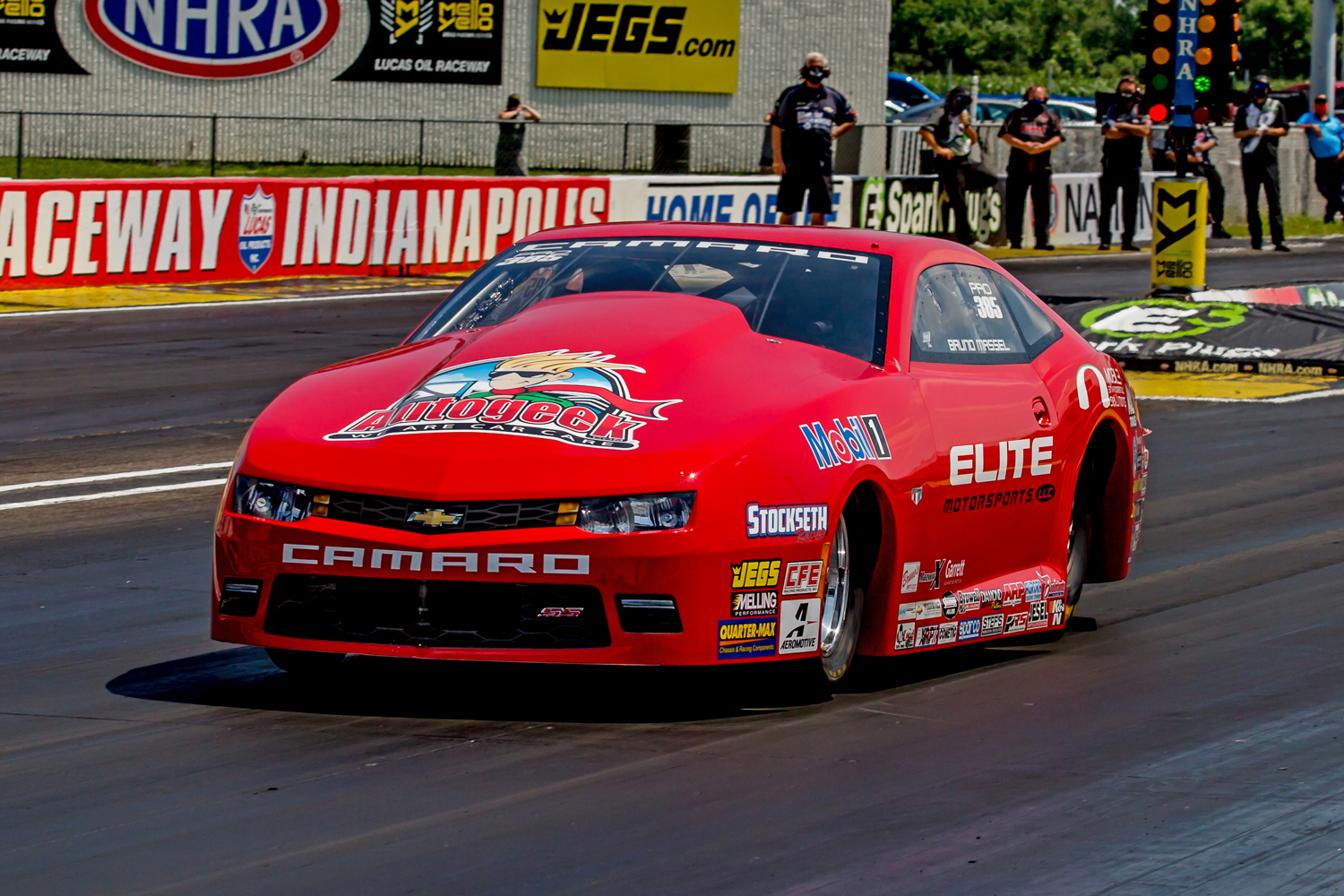 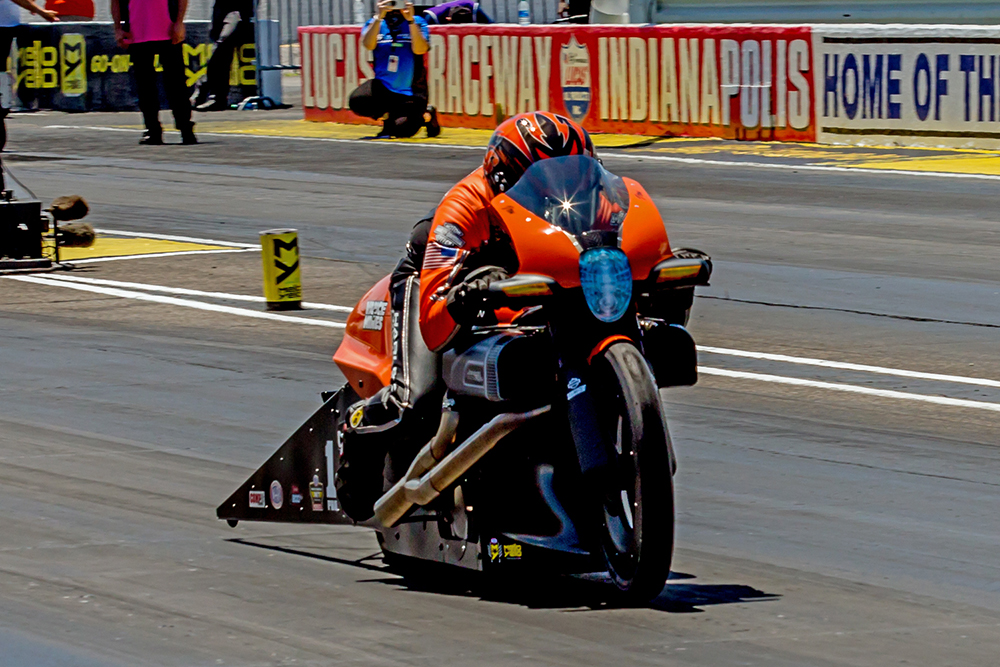 Next Weekend’s July 18-19 event at Lucas Oil Raceway in Indianapolis.
The Lucas Oil NHRA Summernationals at Indianapolis will be the second of back-to-back events in Indy for the stars of the NHRA Mello Yello Drag Racing Series. Racing action will include thrills from the ever popular Top Fuel and Funny Car divisions as well as the 2020 season debuts of the E3 Spark Plugs NHRA Pro Mod Series presented by J&A Service and the SAMTech.edu NHRA Factory Stock Showdown and the resumption of the Mickey Thompson Tires Top Fuel Harley Series that competed at the season’s first two events.

Check out Mike Burghardt’s photos of the weekend Finals from INDY!

Classic YouTube: Alvin "Tex" Johnston's Barrel Roll Of The Boeing 367-80 Prototype Over Lake Washington Wrenching On A 1949-1951 Ford? Make Sure You Upgrade To Power Steering With Borgeson!