Blow Over Video! Watch A/Fuel Racer Steve Collier Suffer The First Blow Over In 11 Years At An NHRA National Event 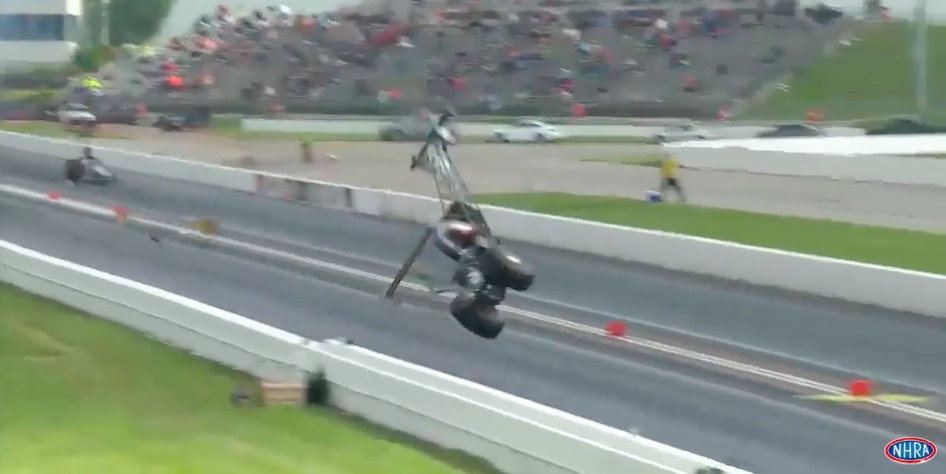 There were certain truths I held to be self evident when I started traveling on the NHRA Mello Yello national event tour. One of them was that I would never see a blow over when I was calling a race. I was wrong. Yesterday at the NHRA Menard’s Heartland Nationals presented by Minties, A/Fuel racer Steve Collier suffered the first blow over at a national event in 11 years. The last time a car did this at a national meet it was Kate Harker in Sonoma in 2007. This was one of the most frightening things I have ever seen happen on a drag strip and also one of the most stunning. To see a 300″ wheelbase car stand on end, watch the body panels rip off and see it fly 600′ through the air is beyond anything I have ever seen personally in this sport. Before Monday morning I had only seen these types of incidents in the old Diamond P videos. Advancements in chassis and materials technology had all but rendered the blow overs of the 1990s moot. Sadly, that was not reality.

Collier who is an accomplished sportsman racer and part time competitor in the NHRA’s Top Alcohol Dragter division suffered the incident at Heartland Motorsports Park, outside of Topeka, Kansas. Competing against Monroe Guest in the rain-delayed race, he launched off the starting line and unbeknownst to him or anyone else, the wheelie bar on the back of the car had failed, whether it was due to the early tire shake or something else, it was not man enough for the job of keeping the nose of the car down. In classic form, the dragster drove into a wheelie and the air under the dragster which eclipsed the eighth mile timers at 219mph took over from there. It was pure devastation.

Collier was able to get out of the car, stand and talk to the NHRA Safety Safari has suffered back injuries as a result of the wreck. We understand that his back is broken in two places and that he is receiving treatment at a medical facility in the Topeka area.

We are very glad Steve is alive and we hope that he will have a recovery that’s ahead of doctor’s schedule. The video below is nearly beyond words in its intensity.

Want To See Real No Prep? Top Fuel Dragsters On A Bare RAF Runway In England At Fulbeck Circa 1973 Edelbrock Tech Video: Here's How To Adjust The Pushrod Guide Plates On A Small Block Chevy Head