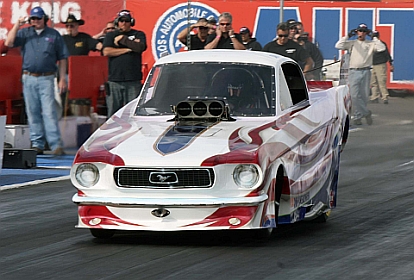 “Words and Photos by Darr Hawthorne”


POMONA, Calif. – Prolong(r) Super Lubricants continues to support the NHRA Heritage Series nitro funny cars in the Boise-Bakersfield Blitz as the second round of the series was on June 15 at Auto Club Famoso Raceway. 16 nitro funny cars participated in the second round of the Blitz and Dan Horan Jr. remains the top points earner in the series in his “Patriot” 1966 Mustang, winning the $3,000 cash prize.

The Boise-Bakersfield Blitz is a four-race points-earning series for AA/Funny Cars during the 2013 season. The first race took place on April 26 – 28 during the NAPA Auto Parts Ignitor at Firebird Raceway in Eagle, ID. The third race will be held during the Famoso Raceway’s Saturday Night Nitro Shows on July 13 in McFarland, Calif. The fourth and final race will be at the 42nd Pepsi Nightfire Nationals at Firebird Raceway on Aug. 8 -11.

When the evening of racing was over, it was Horan Jr.’s bracket-like 5.81 performances that put his funny car into the Famoso Raceway Winners Circle for the second consecutive time with a 5.812/253.09 mph charge. The runner up was Robert Overholser, driving Don Nelson’s “California Hustler” 1977 Firebird with a holeshot 5.815/243.28 mph charge over newcomer Devery Howard in the “Bays & Rupert” Camaro who ran 5.810/246.66 in his losing effort.

Horan Jr. continues to lead the series with 47 points, Overholser remains in second with 42 points, Roger Garten in third with 37 points and Dennis LaCharite has 33 points and stands in fourth place. 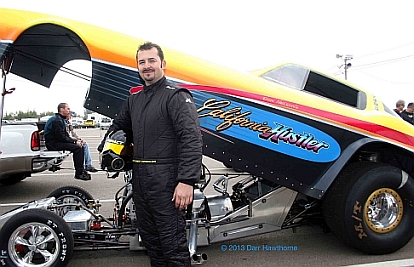 At the end of the Blitz, the top points earner will receive $1,500 of Prolong 70 Weight Nitro Racing Oil, a winner’s jacket, a 55-gallon drum of nitromethane and $2,000 in cash and gift certificates. The runner-up will receive $600 in cash and gift certificates and a 55-gallon drum of nitromethane. For the participants, teams will have a special event for the top eight finishing cars, which will be part of the 2014 March Meet qualifying.

With the excitement generated for the Boise-Bakersfield Blitz, Hedman Hustler has joined into the prize pool with a set of Hedman Hustler Funny Car weld-up Hedders and Wright-Way Blowers has added a complete supercharger re-stripping.

Prolong’s Nitro Racing Oil features a blend of premium synthetic base oils and additives, and is formulated with the company’s advanced Anti-Friction Metal Treatment(tm) (AFMT) technology to protect against high temperature oxidation, wear and viscosity breakdown during severe use.

Barnstormin': It Ain't The Size Of The Strip... eBay Find: A Weird 1965 Chevy Suburban With An Extra Axle And A Firebird Chassis? We're Confused Too