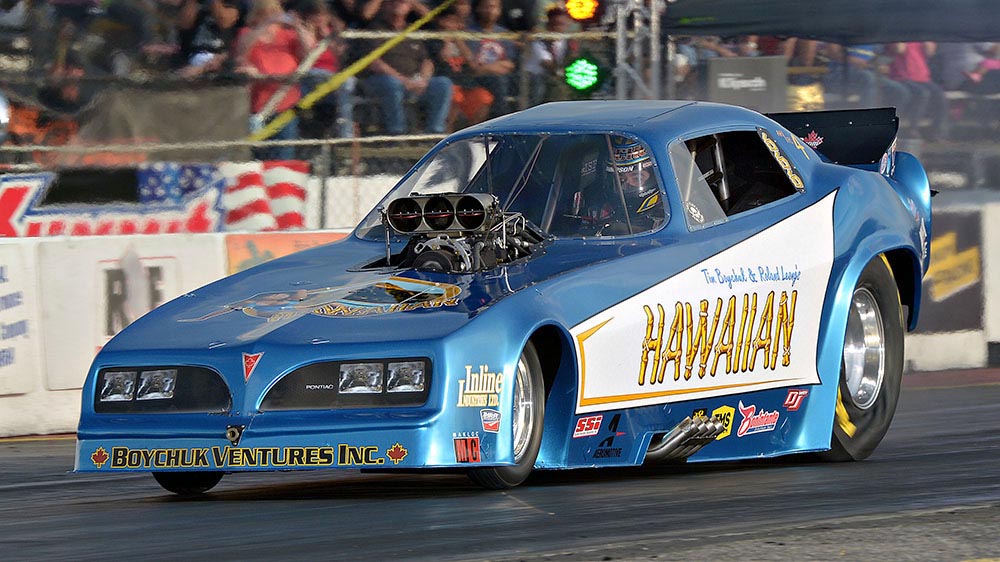 IHRA was forced to postpone qualifying for the Nitro Jam Mardi Gras Nationals due to rain and wet condition and, with continued rainfall the State Capitol Dragway, could not be adequately prepared for the pro classes.  The entire show, with two rounds of qualifying and three rounds of eliminations, was run on Saturday. 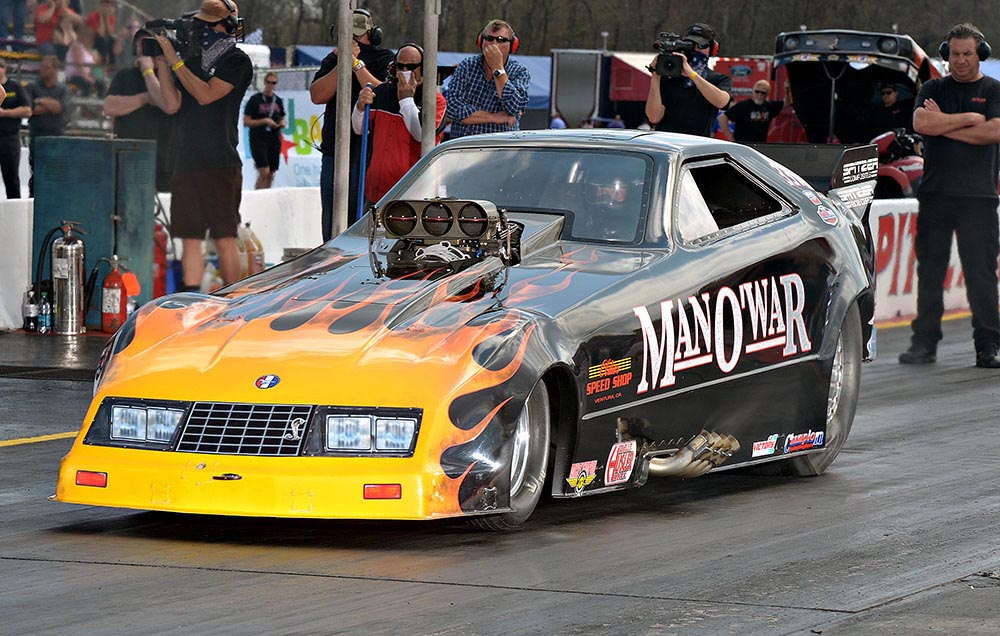 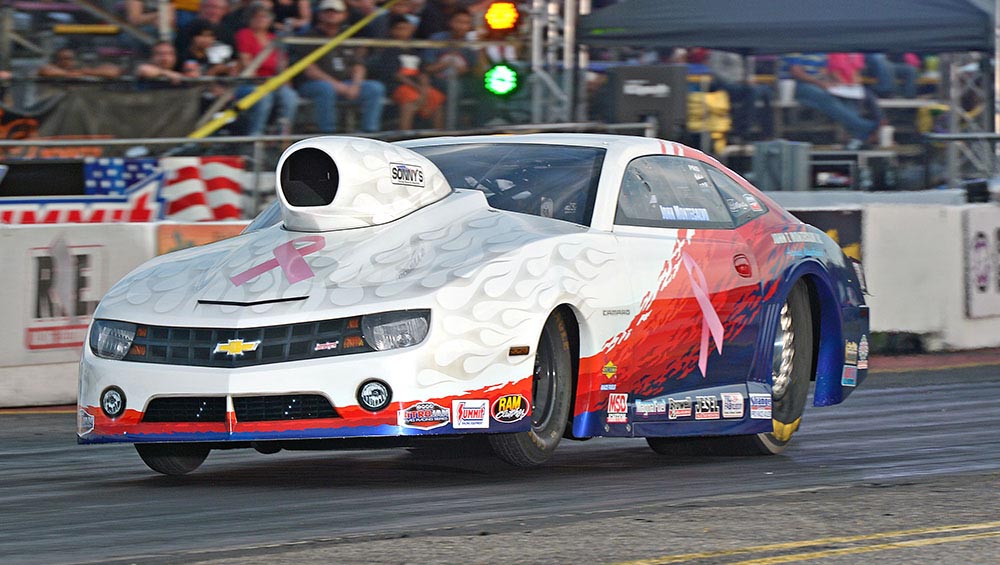 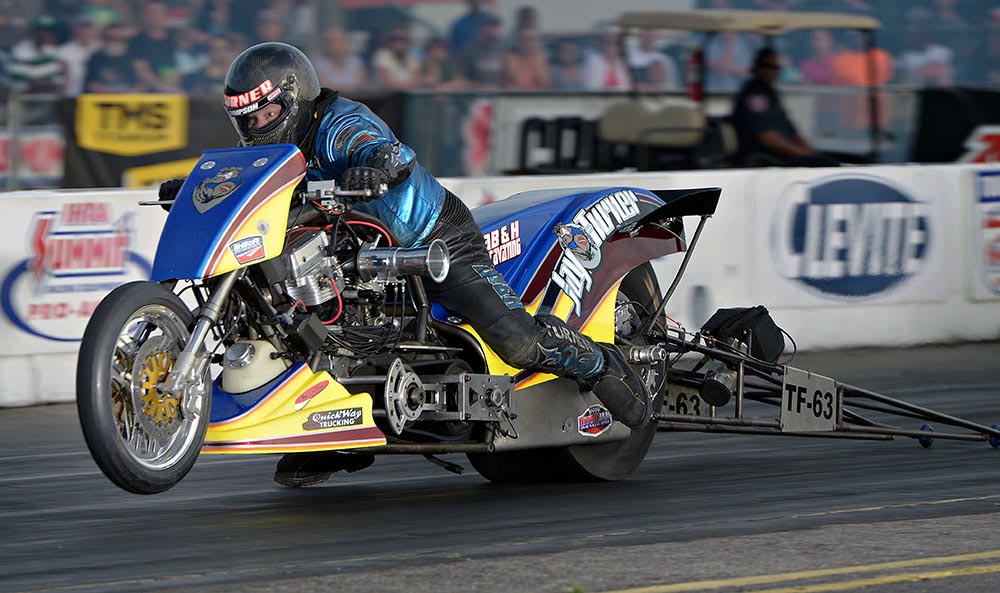 Jay Turner earned No. 1 Qualifier status in the Nitro Harley class after the second round was completed.

AMSOIL Nitro Funny Car presented by Aeromotive – Racers elected not to conduct a second round of qualifying. 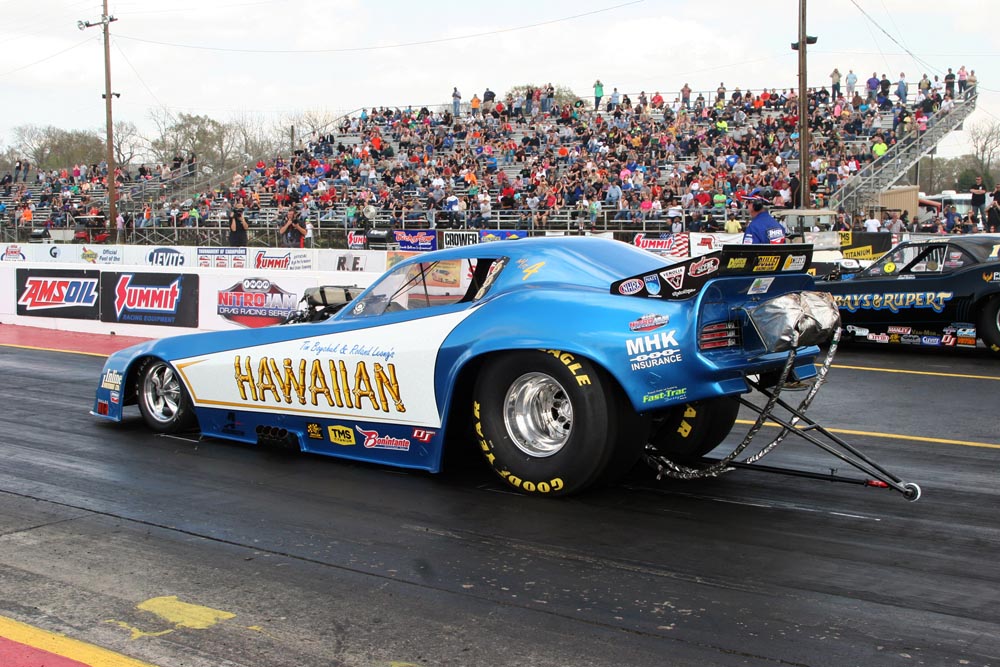 Boychuk defeated No. 1 Qualifier and past IHRA champion Paul Romine in first round, then scored a bye run in the second to meet Rupert in the final. 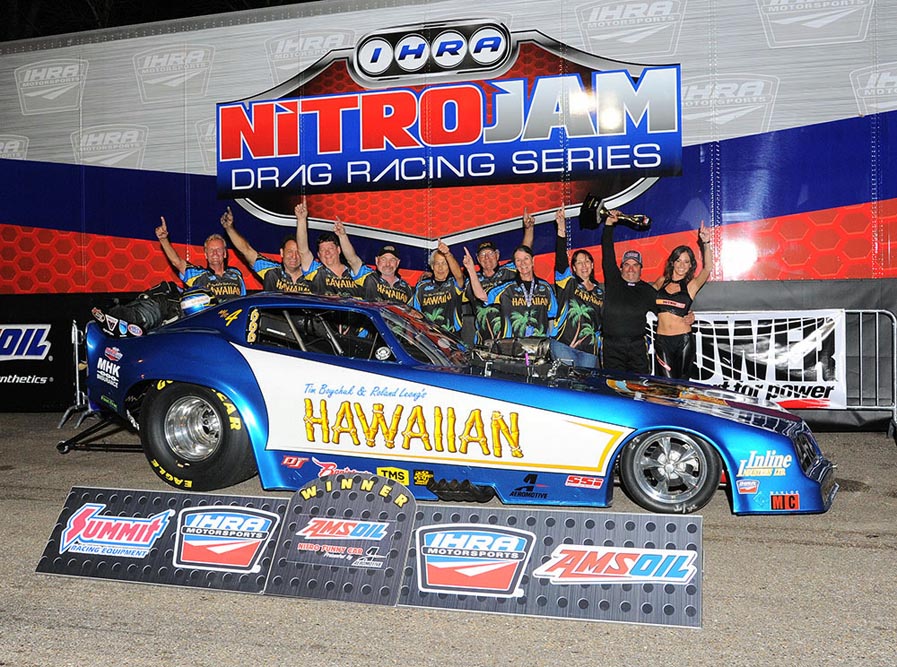 “This is big for us,” Boychuk explained. “We struggled for the last year-and-a-half or so and it’s been really painful. We started off winning a lot, then it kind of all went away on us. Now it’s back – the car’s back. I can feel the car is back and it’s really working the way we want it to work.  We changed a few things. I bought out my partner, Ron Hodgson. We had a great relationship – we still do – he didn’t want to race as much as I did. Now we got Twig (legendary driver Twig Zeigler of 1970s Pizza Haven Funny Car fame) and Roland (revered ‘60s-‘70s “Hawaiian” Funny Car owner Roland Leong) both working on the car and they’ve got it back again. I’ve got two great guys looking after the car. The team – we’ve got the same crew working on the car – has so much consistency.” 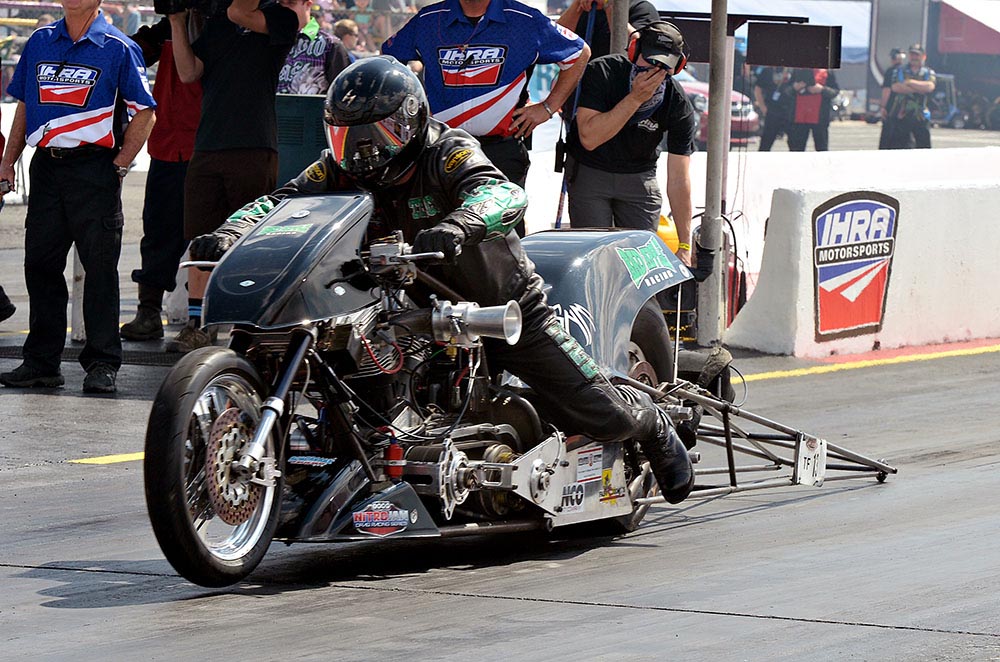 Tracy Kile, of Asheville, North Carolina, faced Brian Jernigan in the Nitro Harley final. After Jernigan crossed the finish line, he became separated from his motorcycle and crashed. He was transported to a local medical center for evaluation. Kile qualified third and defeated Rocky Jackson in the opening round and Alvin Kobernusz in the second. 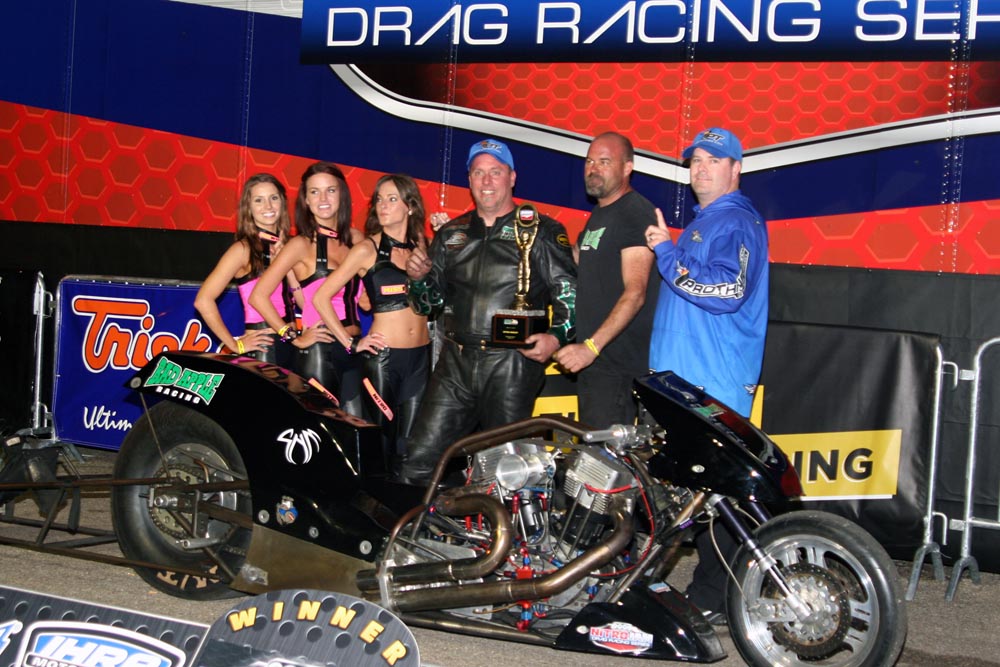 “It’s the second race of the year, and a very big win,” said Kile. “We come to every race knowing we can win. The IHRA Nitro Harley field is gonna be tough all year long. We’re just going to get used to it and run ‘em round by round.” 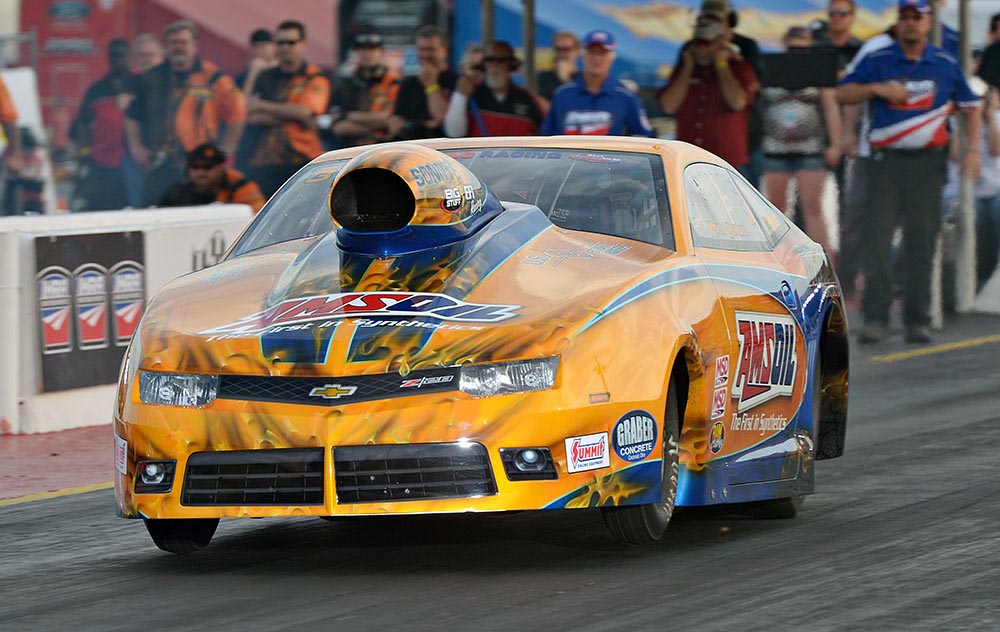 Kevin Bealko, of Bridgeport, West Virginia, qualified seventh in an eight-car field. He defeated Cary Goforth in the first round of eliminations, then faced teammate John DeFlorian Jr. in the second. Bealko defeated J.R. Carr in the final, 6.272 sec./224.71 mph to 13.602 sec./62.20 mph, to collect the coveted IHRA Ironman trophy. 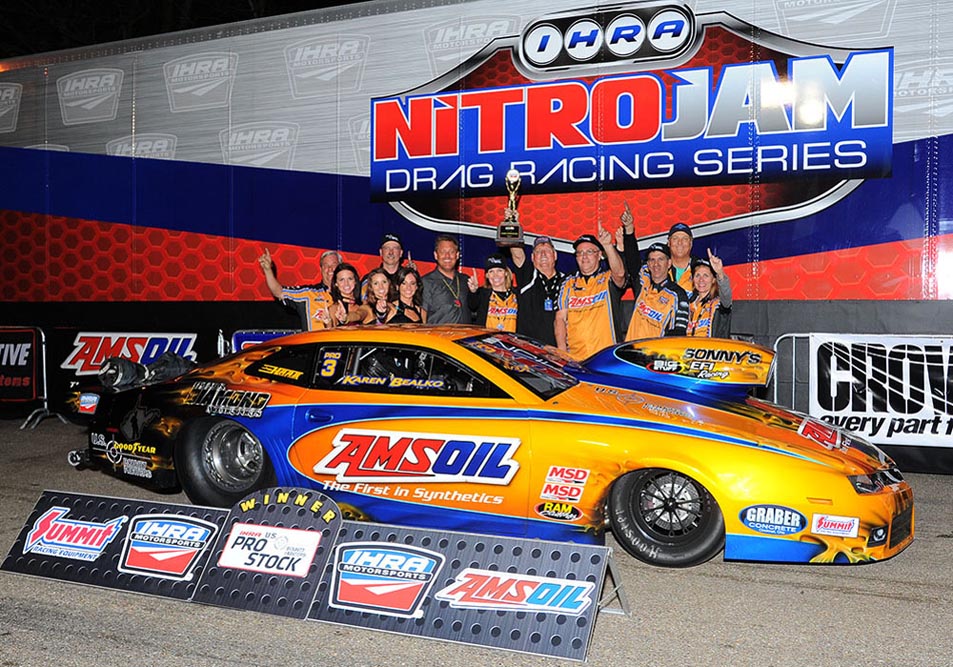 “It was a big win for us,” said Bealko. “Having to race my teammate, John, in the semi-finals is never our best-case scenario. To be able to get by him, then run J.R. Carr, who’s been stellar all day. I just got switched up on the lights and got an awful long light before I left. But the car went right down there and the whole way there I was just thinking of my crew they’re gonna kill me if I don’t get in front of him. I was able, by the grace of God, to get in front of him and we had a nice win.” 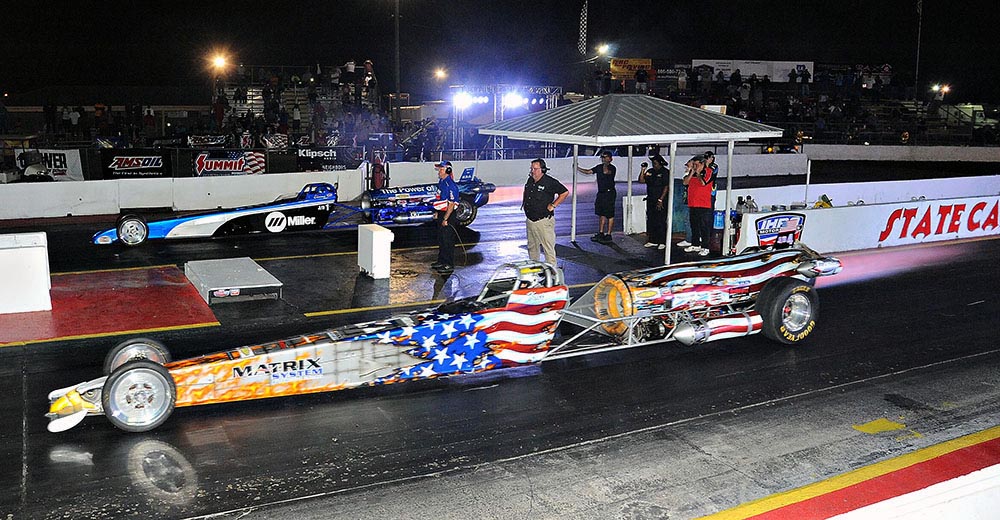 Kat Moller, a 19-year old University of Florida student, faced Elaine Larsen in the Jet Dragster final. It was a repeat of the season-opener in Tucson, Arizona, last month, where the pair faced each other in Jet Dragster finale. This time, Moller prevailed.

“I’m super excited about it,” admitted Moller. “Last race I had Elaine in the final and she beat me to the finish line so this race I’m glad I got to beat her. So we’re even and we’ll see who wins next time.” 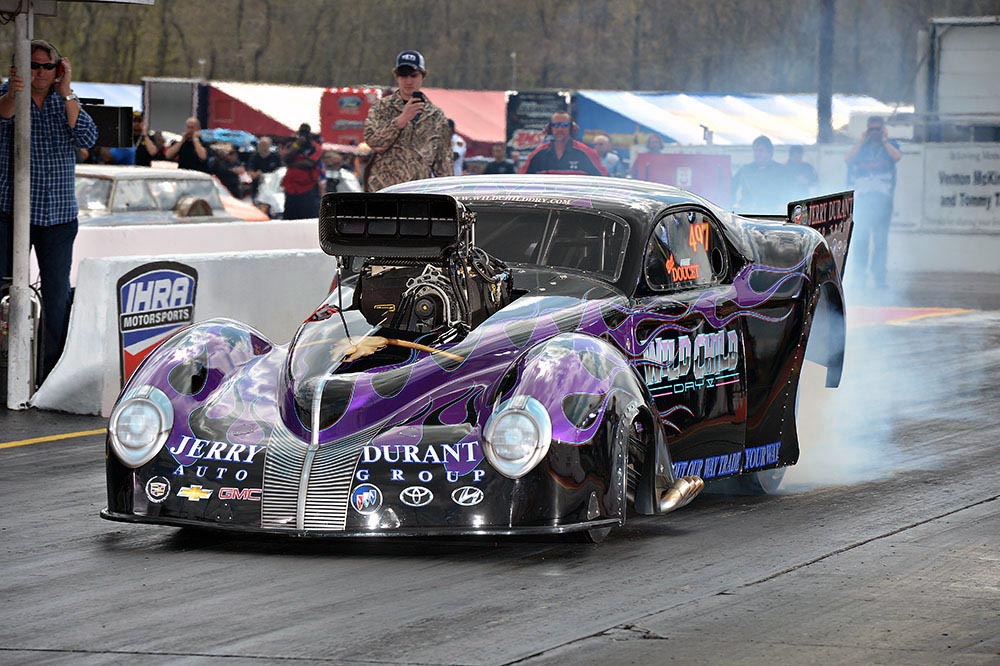 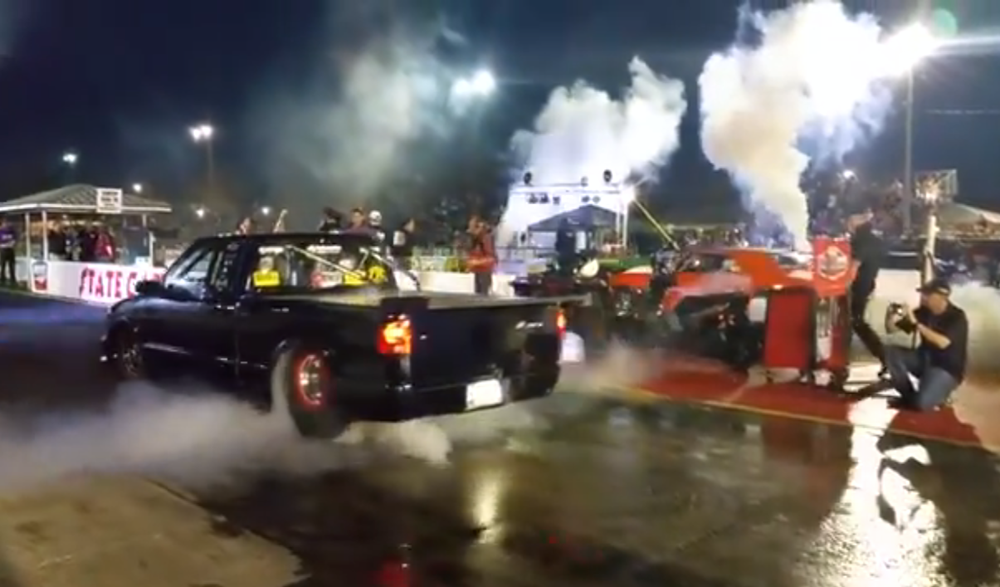 Street Outlaws racer Tina Pierce and Alex Taylor staged an exhibition race in their street-legal cars during the Mardi Gras Nationals. Pierce’s S-10 made a hard left turn and crashed during the race. She was transported to a local hospital for evaluation and released. The IHRA’s rigid safety standards prevented her from suffering serious injury. 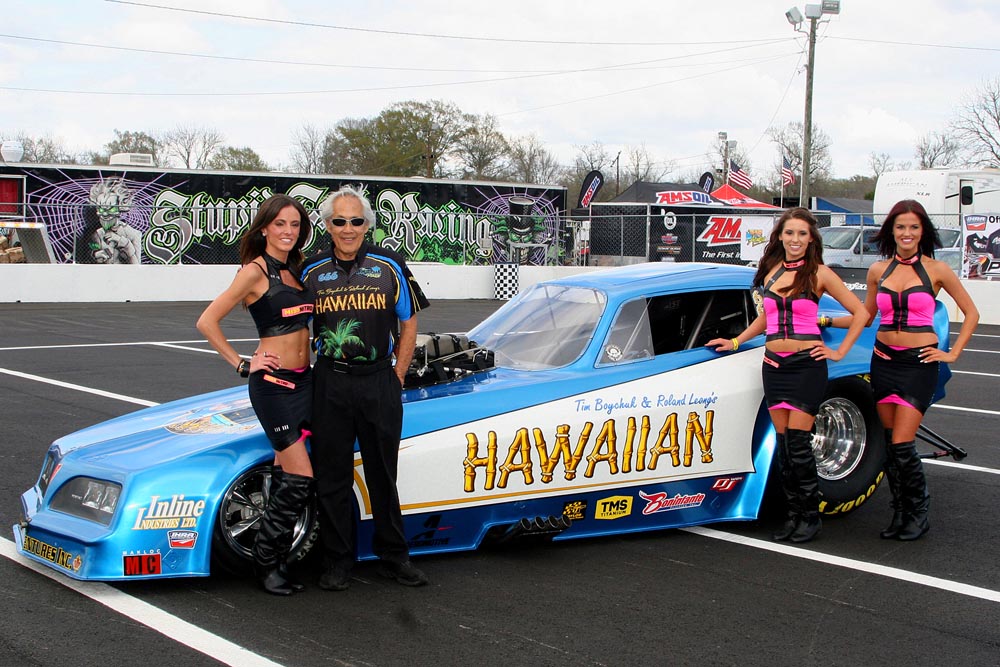 ROUND BY ROUND ELIMINATIONS:

This 1962 Porsche Super 3 Tractor Is The Most BangShifty Porsche There Is...And It Is For Sale! Watch The 2015 Mustang GT Track Apps Package Get A Workout By A Talented Teenaged Drag Racer - Big Fun!