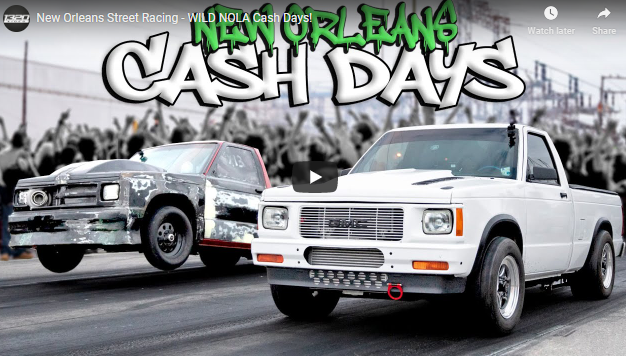 In this epic age of street racing, where Cash Days have become something even some casual hot rodders and car fans know about thanks to all the tv shows, there is big money on the line. With Covid going on, even street racing has taken a hit though, and this New Orleans cash days was no different. Although 45 racers were signed up, and sent their money, just under 30 actually showed up for the race. The winner would take home $9,000 for the win, and we’re telling that at this one you had to earn it. Not only were there some bitchin fast rides to contend with, but also road conditions, close calls, and of course the cops. There is no doubt that they don’t want this stuff going on, but man some of these race promoters have found amazing locations that they can sit and race at for hours, or at least sometimes.

If you like nitrous, if you like turbos, if you like blowers, there is every one of those coming to you in the 1320Video below. Kyle, Fred, and Matt were on hand getting you all the great footage and they caught every wheelstand to prove just how bad ass these roads really are in New Orleans. Of course like most street races there were some hurt feelings, an argument or three, and a pretty good fight. But in the end the cars were the stars, the drivers pushing them to their limits, and the baddest of the bad proved why they are feared. 9 rubber bands, 9 stacks, whatever you want to call it, the winner took home $9,000 and it was certainly fun to watch.

Check out the video below and let us know what you think.

Stacks Are Back! Hilborn Has New EFI Stack Injection Setups For Big Block Chevrolet With All The Looks Of The Originals Would You Buy An Unfinished Drag Car Project? How Unfinished? Or Would You Only Buy Stuff That Is Ready To Race?