Classic YouTube: Watch A 427-Powered Mustang Whip Up On A Supercharged BMW M5! 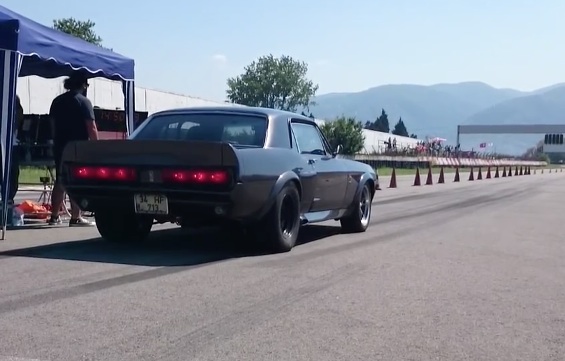 The E39-series BMW M5 is a car to take very, very seriously. When it debuted in 1998, it was an attention getter: it might look like your “I just made middle management and I decided to splurge on myself” executive four-door from the time period, but this was a 400 horsepower, six-speed manual trans equipped sport sedan from Germany, land of the Autobahn. It could handle. It could fit suits inside with no problem. And in the hands of a purposeful hoon, it was a four-door muscle car from Germany that stormed and stomped with a soundtrack that was properly rowdy. If you read any of the new car mags, you saw images of the M5 being drifted with the rear tires ablaze everywhere. Looked like fun, didn’t it?

And all we could think of was, “That’s cute.” We will admit that we were lacking in the sporty sedan market…the closest thing we had to offer at the time was the Chevrolet Impala SS, a hot-rodded Caprice with a bit of the old “badass in black” Grand National swagger, not bad but not in that league. But the truth is, the M5 boiled down to the engine. And when it comes to engines that can cause people to spew hyperbole and expletives, few and far between do a better job than the Ford 427 Cammer, the Blue Oval’s middle-finger response to Chrysler’s Hemi during their 1960s NASCAR tit-for-tat. Want to see what how the two stack up? This 427-equipped pseudo-Shelby is lined up against an E39 Bimmer that is supercharged. That’s not a factory iron lung on the 4.9L V8, either…that means this BMW was built to kick ass around Europe. This race should be fairly close, then, right?

3 thoughts on “Classic YouTube: Watch A 427-Powered Mustang Whip Up On A Supercharged BMW M5!”