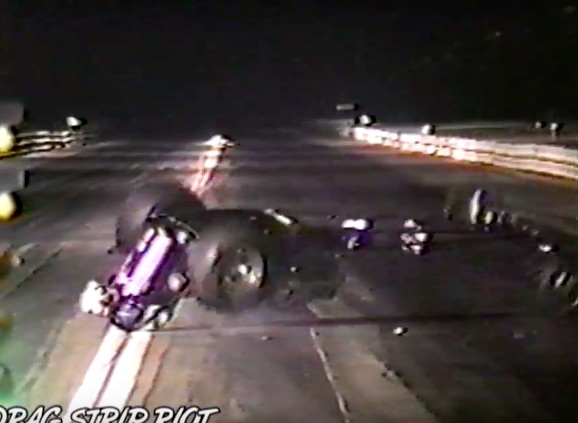 Nostalgia Drag Racing today in the year 2016 is a far different animal than the activity that began back in the 1970s and then really caught fire in the 1990s. If you had told someone in the middle 1990s that someday there would be “nostalgia” funny car running mid fives at over 250 mph they would have had you arrested for public drunkenness. This video shows the wilder side of the scene from those days and it is a window into a very important time for the nostalgia nitro movement. Pay attention to the chassis, the door cars, and whatever else you see running down the track and consider how much things have changed on the technological side of the sport. Also, pay close attention to another thing, the race tracks.

You’ll see lots of empty bleachers at Famoso, you’ll see some really rough looking places, and you’ll see lots and lots of steel guardrail. That stuff was the industry standard for a long time but is not suitable for use anymore where really fast stuff is going to be running. From the rudimentary chassis to the rough and tumble performances, the world of nostalgia drag racing and all of drag racing for that matter has changed drastically since this footage was taken in the 1990s.

Some would argue that the current iteration of the scene is way removed from the original intent, others would argue that seeing the incredible performance of todays “nostalgia cars” are fun to watch, and others are just there for the cacklefest. This is some wheel standing, wall banging action!

Can Vice Grip Garage Get The LS1 Out Of This Corvette By Lifted Off The Body? This Lawn Tractor With A Rotary Engine Is The King Of Overpowered Yard Equipment