When The Wheels Fall Off: Watch Daniel Wilkerson’s Crazy Crash From The 2009 NHRA Memphis Event 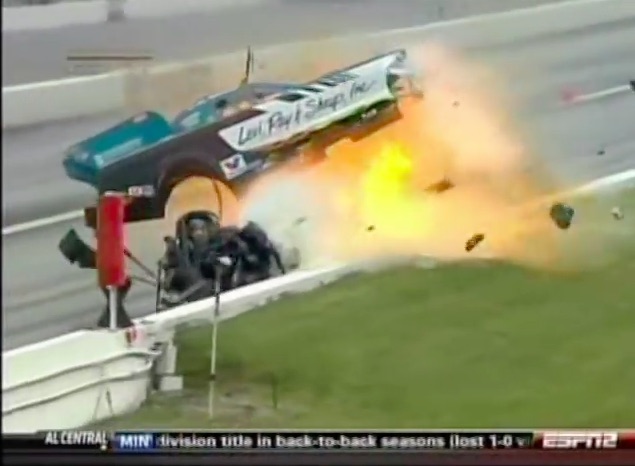 While the NHRA no longer races in Memphis, they did in 2009. It was the race that preceded the event that we’re heading to this weekend in Virginia. That’s why this memory kicked up for me because I knew it happened at about the same time and I also knew that it happened 10 years ago now.

You are about see see Daniel Wilkerson’s bizarre and violent crash at the 2009 NHRA race held in Memphis. Daniel is of course Tim Wilkerson’s son and a capable funny car driver and tuner himself. In this case the debate centered around the root cause of the wreck. We could not get the answer as to whether one set of studs sheared and then the other or if perhaps a crew guy had not actually tightened the lug nuts down on the wheels.

You have to think that when the first tire parted company with the car Daniel felt it and when the second one left he knew he was boned. The way the car rotated is kind of amazing. The thing just turned 90-degrees left and piled itself into the wall face first. Daniel walked away but the car was completely and utterly mangled. So as you get to watch this and be a keyboard crew chief, what do you think happened?

Did the studs shear off or did someone forget to tighten and torque the lug nuts. In either event the ending was still the same ugly and violent one. Rough!

We’ll see Dam Wilkerson tuning Blake Alexander’s funny car this weekend in Virginia and see if we can get the good from him!

Unknown Parts Counter Guy: Keep Your Retaliation To Yourself Unhinged: Learning And Re-Learning The Fine Art Of Manual Transmission Operations