Best of 2019: Watch This Drag Racer In Thailand Battle A Power Wheelie On His Motorcycle 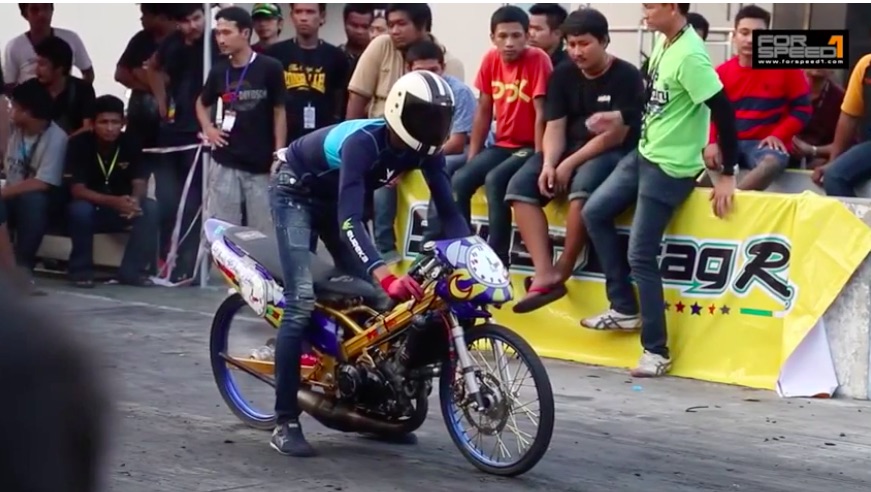 We have long preached the fact that perhaps even more than soccer, drag racing is the most internationally diverse activity human beings participate in. Every developed nation (and some undeveloped ones) on Earth have drag strips. Indonesia is no exception. The region is rife with competition and while it may not be with the traditional muscled up cars we are used to watching here in the USA, they draw crowds and competitors like wildfire. Why? This video will show you everything you need to see.

Racing a small displacement motorcycle on one of the smallest rear tires we have ever seen, the tall, spindly rider has a couple of jobs. The first is to get the thing off the starting line by planting that little tire and he does that well. The bike gets t 60′ in 1.5 seconds. That’s hustling (to us, anyway). One would think that as soon as you got the thing out of the gate and rolling the little engine would just do its job and the rider would stay tucked. Wrong.

This thing actually drives into a damned power wheelie and the guy cannot get the thing to settle down! Eventually lifting and coasting down the course the bike still runs 12.66 in the quarter and that was after the guy had rolled off the throttle hundreds of feet before the end of the track.

What will these things run with the hammer down all the way through? Gotta be into the 11s, right? Nuts!

Press play below to see this rider battle a power wheelie on his bike!

Best of 2019: Ride Along In A Screaming Lola T70 As it Takes on Daytona - Iconic Car Best of 2019: For Those Morning When You Need A Jolt, How About A Road Racing Rotary?