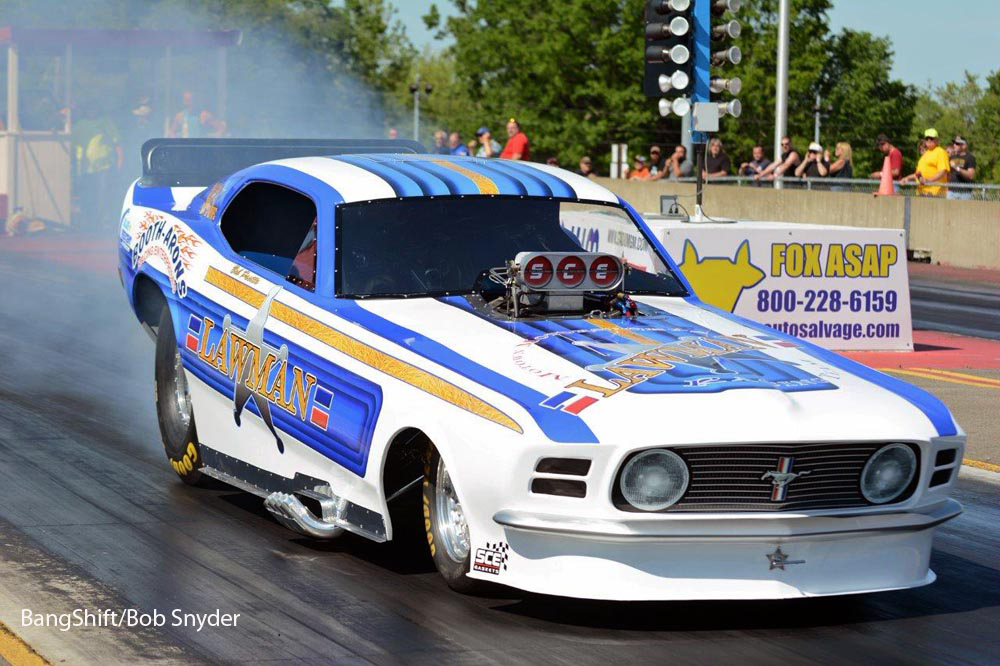 Photos by Bob and Ginger Snyder with words by the Great Lakes Nostalgia Funny Car Circuit.

According to the promoters and racers, this year’s Quaker City Nostalgia Classic & Great Lakes Funny Car Nationals – presented by Pace Performance was a hit as it continues to grow every year.   There were thirty funny cars on the grounds for the Memorial Day Classic at Quaker City Motorsports Park in Salem, OH, twenty-eight of them ran in competition. 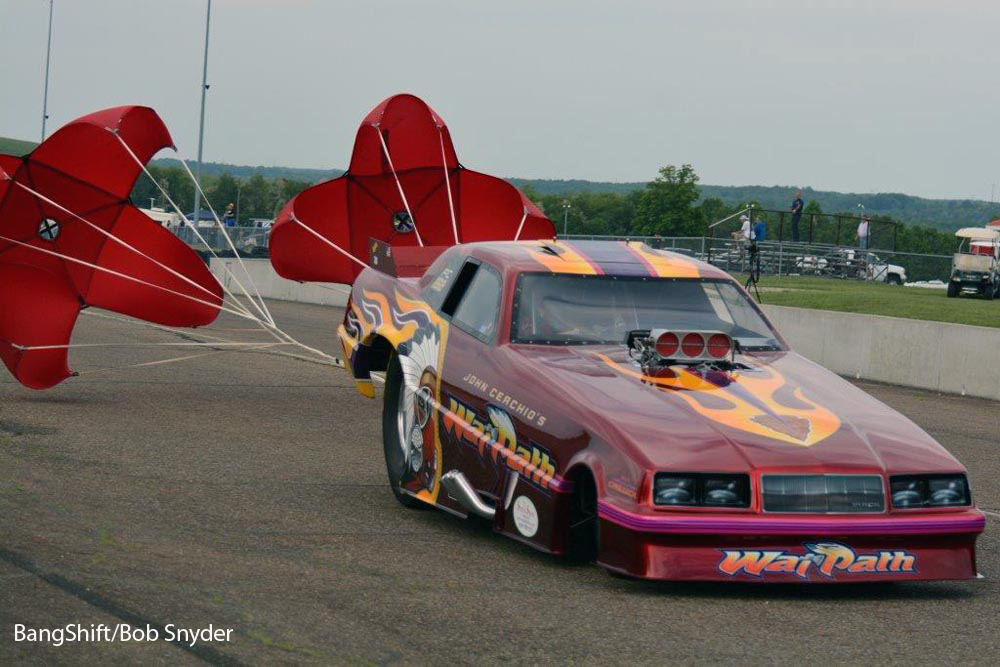 For the past three years at this event, they have paired racecars up in a Midwest -VS- East format and going into the finals the East had a 12 – 11 margin… with the Midwest winning the finals – it was all tied up. 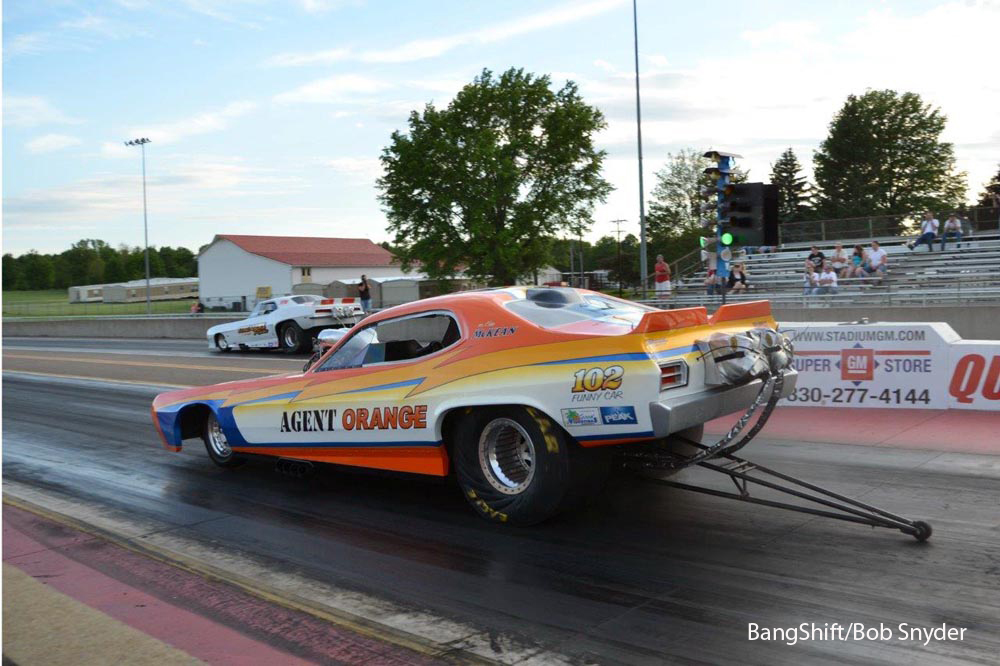 In the blown funny car final, Ron Ooms in the “Streakers Ride” ‘69 Camaro (far lane) with a 6.57 going up against last years winner from the East Kim McKean in the “Agent Orange” Plymouth. Ooms treed McKean’s Duster with a .002 light and held on for the win. 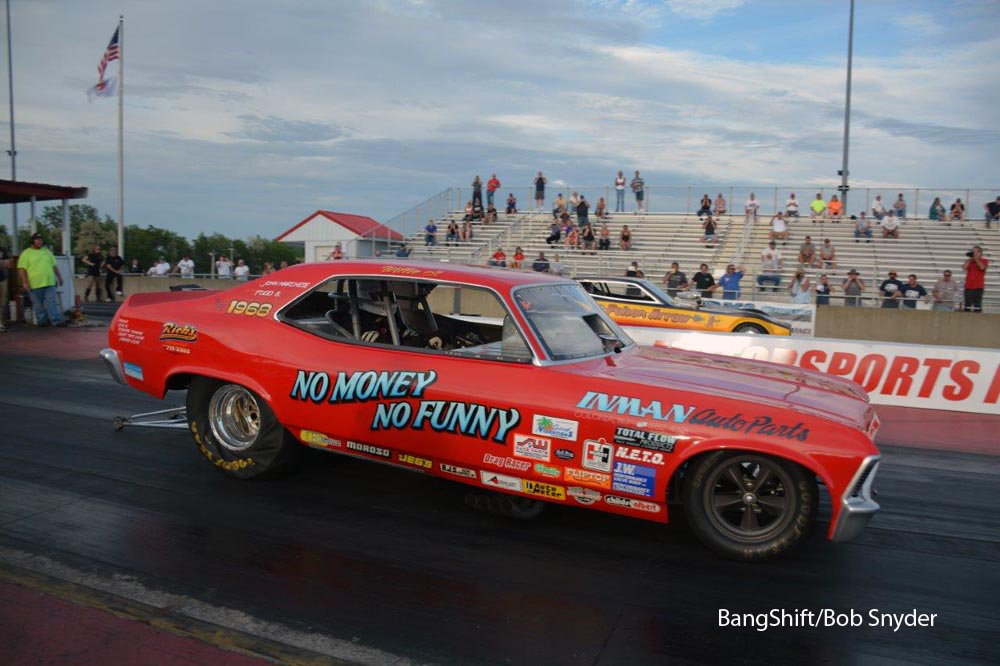 There were five funny cars in the injected class, but did not follow the Midwest -VS- East format. The two finalist were Frank Barnard in the “Poison Arrow” with a 7.93 against Willie Johnson (near lane)  in the “No Money No Funny” Nova who also ran a 7.93. Johnson left first as Bernard used the whole quarter-mile trying to reel him in, but came up short. 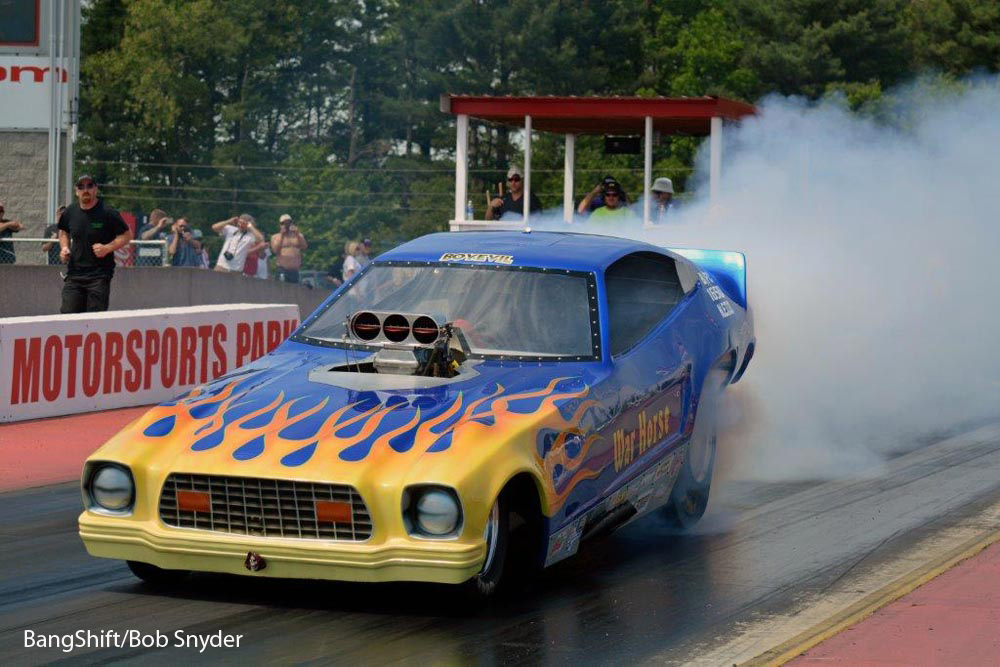 The Good Vibration Motorsports Reaction Time Award went to Bob Daly (above)  in the “Warhorse” Mustang II for the injected class. 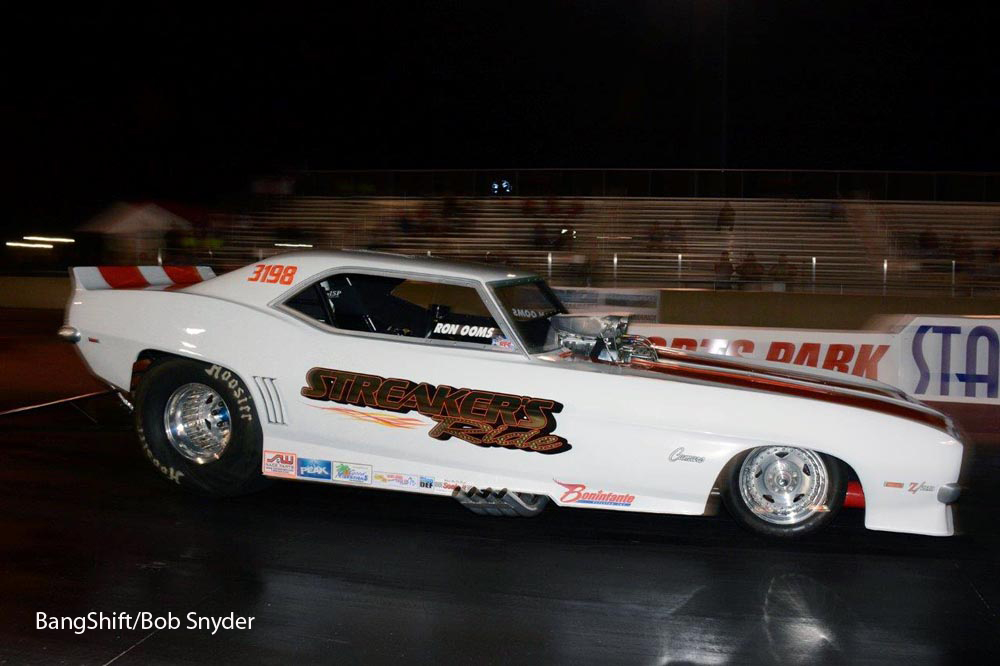 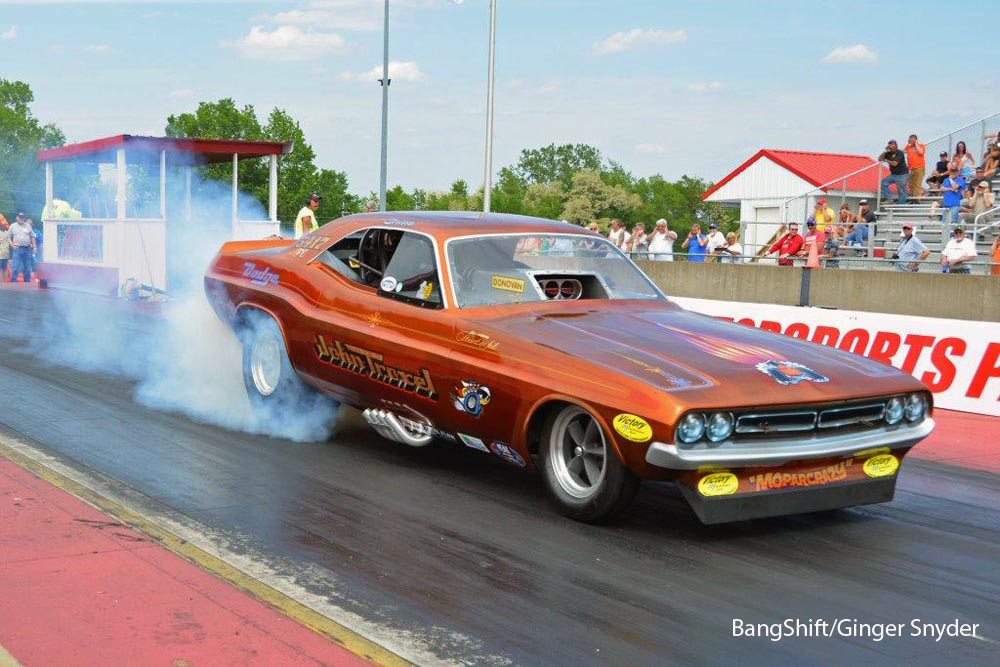 John Troxel’s “Mopar Crazy” is driven by Chris Schneider using a ‘71 Challenger body on an original Logghe chassis, that was raced by Della Woods. The alcohol funny car is powered by a 417 cubic inch Hemi hooked to a 727 Torque Flite trans.  Troxel flew in his pal Hawaiian Roland Leong to tune the Donovan Hemi making it’s best run ever in the first round of 7.61 seconds. 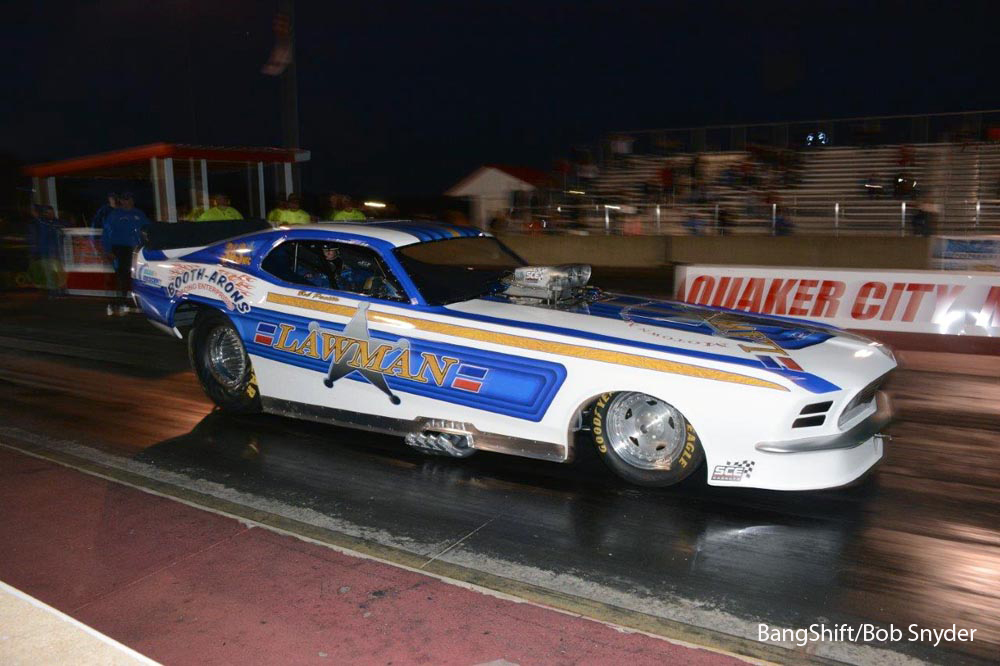 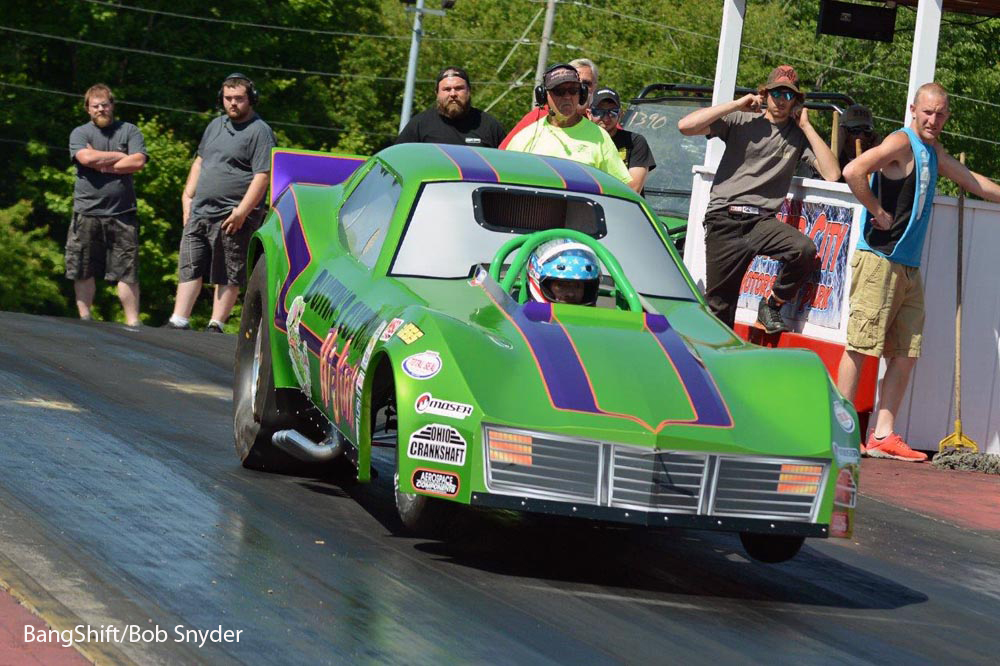 The rear-engined, carbureted Chevy-powered “Hi-Jinx” Corvette (above) is owned and driven by Dustin Corn out of his Dustin’s Customs in Indiana, running a respectable 8.65 and a best of 8.43 elapsed time at Quaker City Motorsports Park.  With those kind of times, you can see why it’s a regular bracket runner.  Yeah, that’s Dustin Corn sitting where the engine should be! 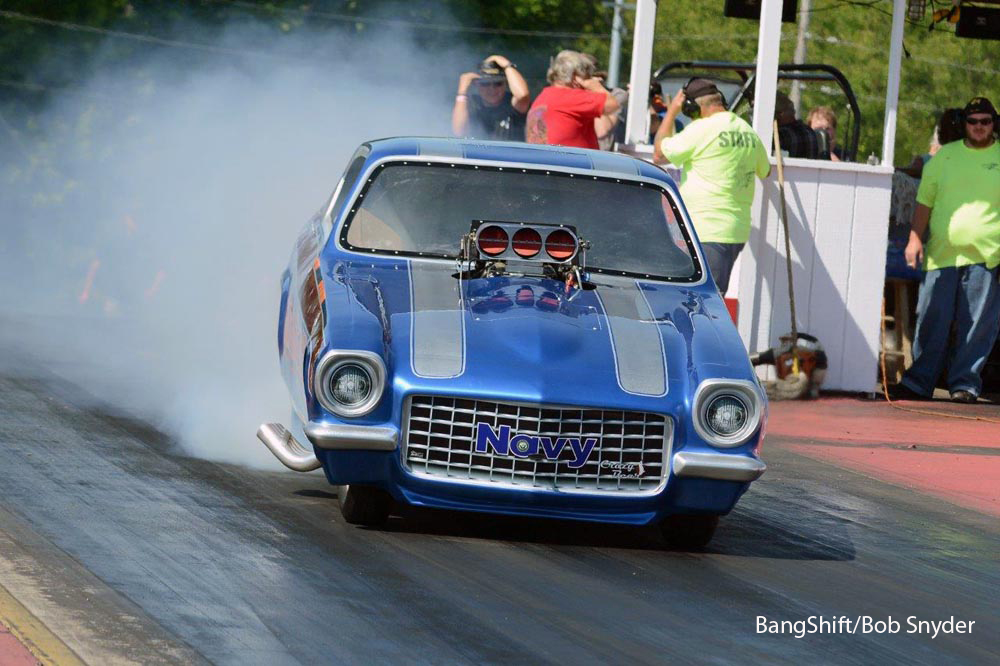 The effervescent Bret Kepner was the event announcer and his knowledgable play by play commentary made the whole event more exciting for the participants and fans, with attendance up from last year. Spectators seemed to be having a great time with all the classic funny cars in the pits and on the dragstrip.

Some of the other groups racing at the event were the Ohio Outlaw AA Gassers, Nostalgic Notions, UMTR, and Southern Slingshots.  One of the racers from the event sent us this cool YouTube video, it was a lot more than funny cars! 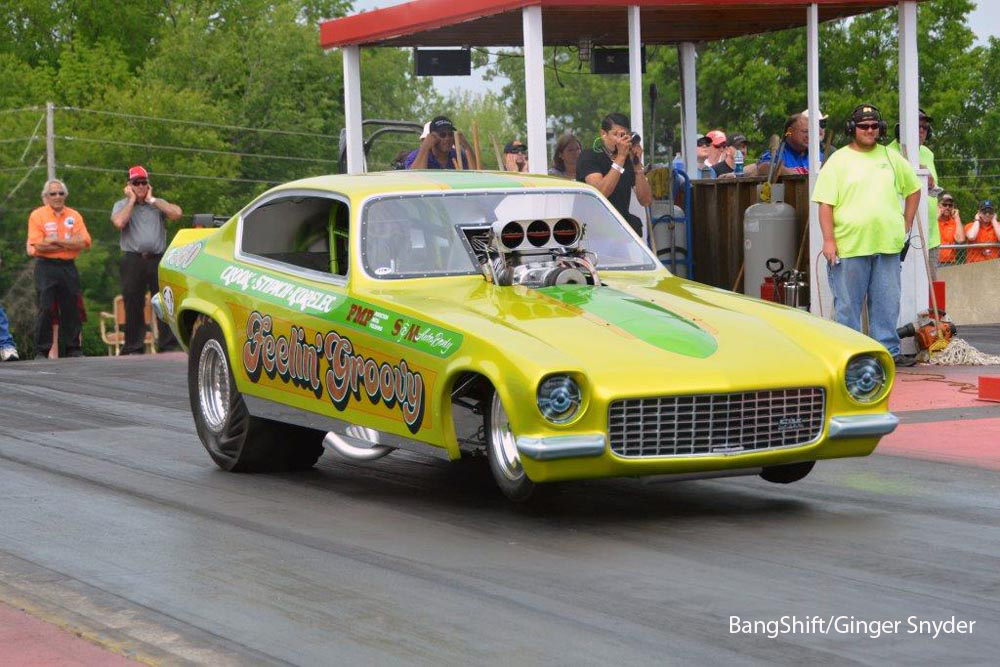 For more information of the Great Lakes Nostalgia Funny Car Circuit go to their website: http://www.glnfcc.com 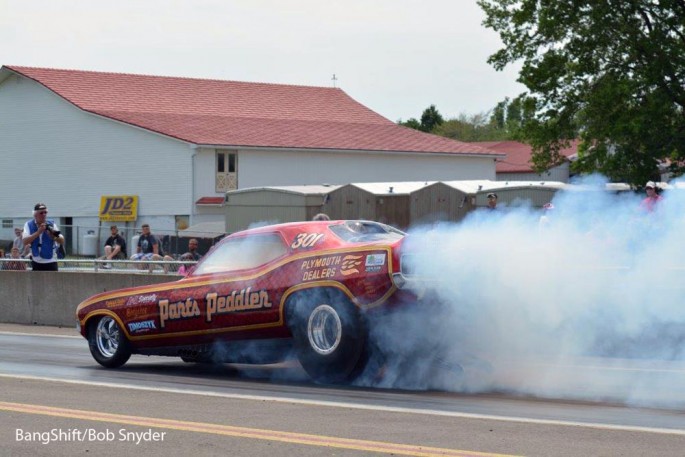 BangShift Challenge: Can You Find A Version Of A Car We Dislike That Would Change Our Minds? Roadkill! The 1970 Duster That Time (and Freiburger) Forgot Gets The Reworked 440 Out Of The General Mayhem Charger!