Flaming In-Car Wreckage Video: Watch A Racer With A Stuck Throttle Crash At The Top End And Escape Unscathed (And Unburned)

Aug 10, 2022Brian Lohnes1320 Videos, BangShift 1320Comments Off on Flaming In-Car Wreckage Video: Watch A Racer With A Stuck Throttle Crash At The Top End And Escape Unscathed (And Unburned) 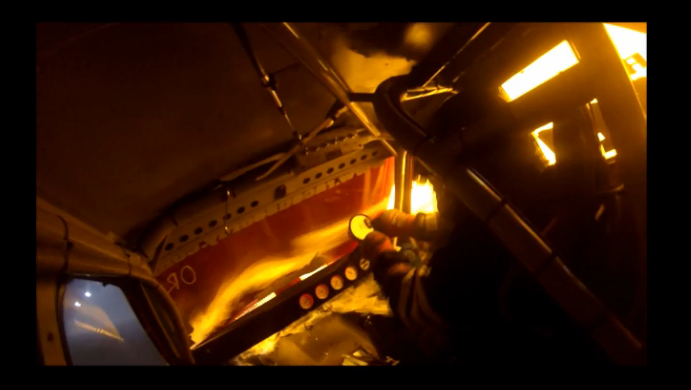 If we took a poll of racer all over the Earth and asked them what the most scary potential issues they could face on a run would be, we’re guessing a stuck throttle, and high speed fire would be two of the top answers on the list. If you can believe it, the guy in the half turned over, and very much on fire vintage Mazda RX3 shown in the lead photo experienced both on the same lap recently in Australia. The Franco’s Mobile Pizzeria Rx3 nearly became an oven for the driver when he got to the stripe, the throttle hung wide open, and in the process of dealing with that issue, he got sideways and smashed the wall head on. His impact was enough to break the front mounted fuel cell and touch off a fire that looked bad from the outside but comes across as downright horrifying from the perspective of the driver himself.

One of the things we noticed after the impact, when the fire began is that the firewall in this car was not very well sealed as there was a lot of flame getting to the driver’s area and even to the driver himself. We have seen thorough tech inspections where inspectors shined a flashlight around the engine side of the firewall with another inspector inside the car to see if the light was coming through anywhere. Light through the firewall means fire through the firewall in a situation like this. (I know a talented racer that was burned very badly because of a high speed fire and a poorly sealed firewall, so sorry for the soap box on this one).

The roll cage and chassis certainly did its job here because the driver is able to literally leap out of the car when it comes to a stop, suffering no really noticeable trauma or issues after the crash. Of course his wallet will be suffering some trauma during the repair process but it sure is cheaper than hospital bills! Lastly, this whole thing stinks because the dude was on a heck of a run. He nailed all of his shifts and the rotary engine in the front of the RX3 was SINGING at the top end. The tune up was awesome, the elapsed time seemed strong, but it all goes out the window when the throttle is hung wide open! We’re glad the dude is OK!