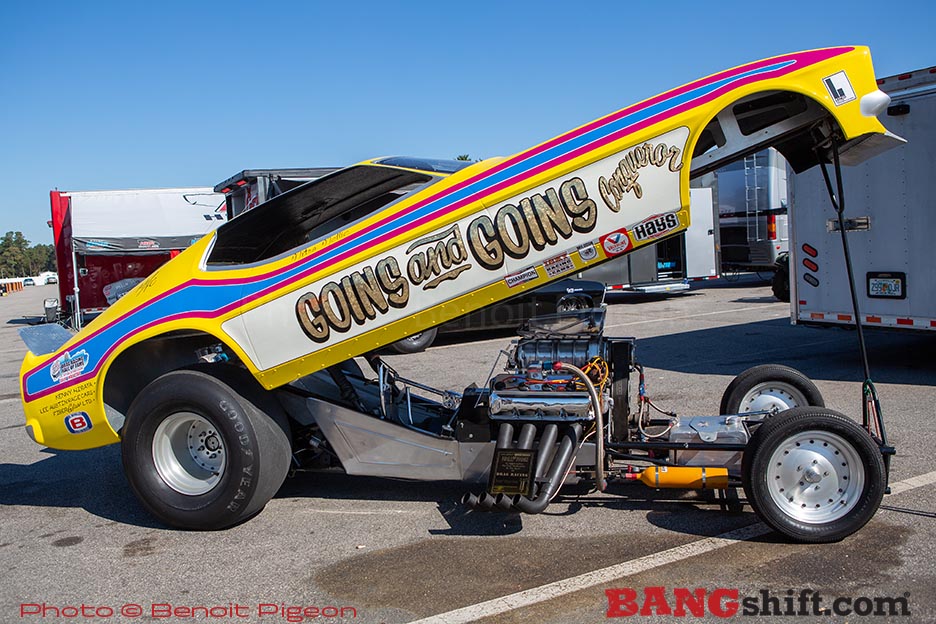 (Words and Photos by Benoit Pigeon) – Nice weather again this past weekend at Nancy Wilson’s racing and car show themed event at Galot Motor Sports in NC. The event brought cars from the midwest all the way to Florida and a bunch of regional regular and nostalgia regulars. This is a laid back event with some racing, but
many seemed plenty satisfied with facing their buddies over and over having lots of fun. That was the case for a small group of perfectly clean AMXs, apparently coming from somewhere in NY state. From the Mid-West you had a couple of coupe bodied small block blown powered slingshots racing each other with nice wheel stands at each pass. I could name a few more of those improvised “match races”. There was a little bit of elimination racing as well with something in the order of three classes.

The car show filled the grass field by 10am with between 150-200 cars and the other show was a nitro cackle fest. That part was run a little early so, sorry no flames on the pictures but if you like the smell of nitro, that was place to be with authentic slingshot cars.

Historically Nellie Going’s funny car had made it all the way from its new home in FL. After crashing the Mustang, Nellie stopped racing but preserved the car for decades. The car is complete as is from that final
day minus the heavily damaged but preserved headers and the body apparently damaged beyond repair and missing. The new body comes from the same mold keeping the car period correct. You can tell the car’s specific time of construction as the seat is fairly large but stripped from the aluminum trims around the driver’s narrow access to her driving position. By the time the frame was build, it had all the basic designs lines and angles funny cars would have for way over two decades, yet even modern funny cars frames still have a lot of similarities. Comparatively, just a few years before Going’s car, funny car chassis were very different. Only the Mustang’s roll cage shows sings of those earlier designs but with quite some evolution. In fact technically this is already a 6 points cage.

I know there are a lot of small groups of gassers, small and big block powered slingshot dragsters that look very authentic, furious ford hot rods, nostalgia Pro Stock cars (they had another event that weekend) and so on that would have had the best of time just racing each other a great number of times. This is a very laid back event and if you know a group or are part of one, why not see if you can be part of the next edition? https://www.facebook.com/nancy.wilson.1612