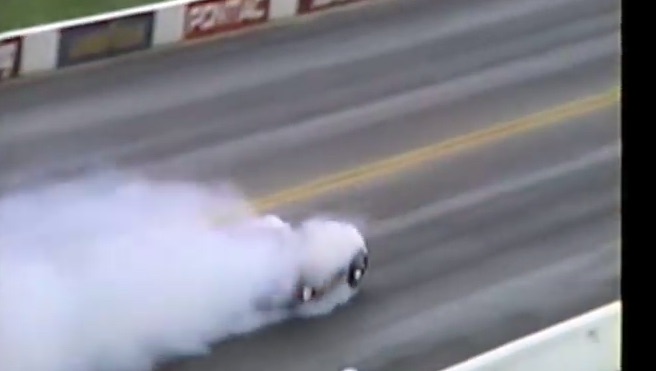 Frank Kunkel is one of the hardest hustling video guys out there. He has been cranking video content since way before it was cool and that includes the long, lost days of 1996 and we’re thankful for that. You’ll be thankful too after seeing the video we have posted below. This is an insanely rare opportunity to see the four engine Wagon Master running with all the facets of modern video. We have showed 8mm video of the car before and that kind of thing but we had never showed it with sound trying to hustle down a drag strip.

As we mentioned above, the year was 1996 and the event was the Goodguys race that was long held at IRP. Ivo was a featured player at the race with the car. Frank Kunkel was there with his camera to capture what we think is the last time that Ivo ever drove this car. Starting life as the “Showboat” in the earlier part of the 1960s, the Buick “station wagon” body was added later but the basic formula remained the same. Four Buick engines linked together and all roaring to romp and stomp their was down the strip, annihilating tires along the way. This is one of the few four wheel drive drag racing machines that has survived the test of time without being wrecked. Ivo got out of of the car after injuring his back in the early 1980s and apparently he made sporadic appearances after that. This may have been the last time he fried all four slicks.

The Wagon Master ain’t all that fast but there are lots of times where speed and elapsed time numbers don’t define a vehicle. We watched this video several times and loved it because watching this thing drive though its own fog bank never, never gets old. Hey, it nearly clipped 150mph on the last pass we see!

(Fastforward to about 2:00 if you want to get right to the racing action)

Flywheel Tech: Listen Up As Will Baty Of Centerforce Drops All Kinds Of Knowledge On The Hows and Whys Of Flywheels Gettin' Down On The Farm: The Southeast Gassers Attack Farmington Dragway - Action Photos!