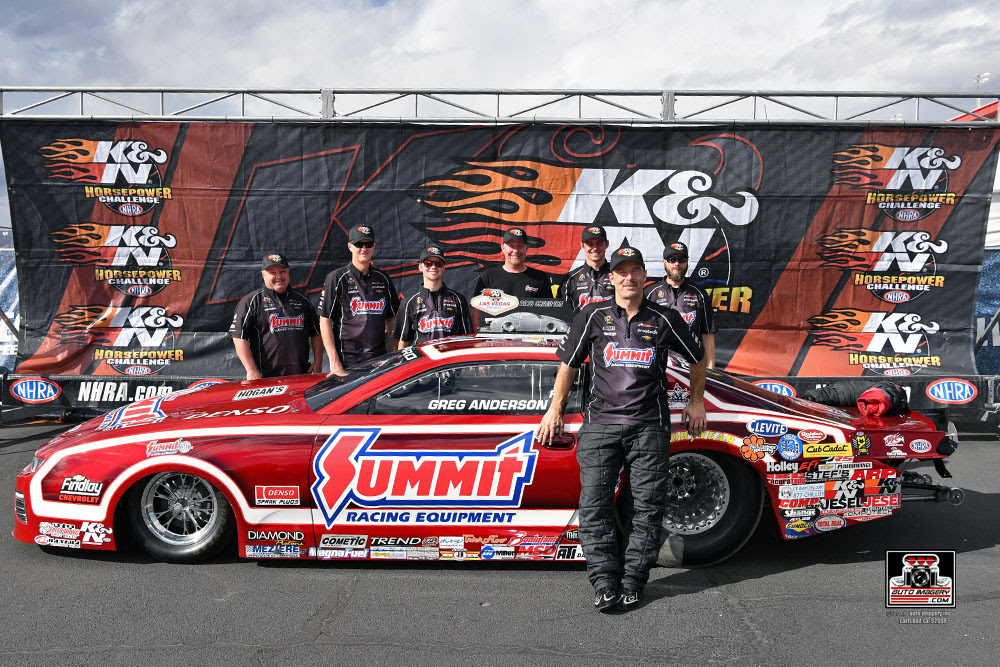 (Photos by Auto Imagery) – The K&N Horsepower Challenge is NHRA Pro Stock’s richest day. Seven drivers who qualify for the event based on points eared during qualifying sessions in the pervious season and one driver who is voted in by the fans race a three round eliminator for the big check from K&N. Greg Anderson was this year’s champ and he pulled off a K&N Horsepower Challenge win for the unprecedented seventh time! This was also his third win in a row at the event. KB Racing was well represented as Anderson and team driver Bo Butner squared off in the finals.

It was an awesome weekend in Las Vegas with sellout attendance on Saturday and Sunday. Friday’s crowd was also massive and the fans hung in the stands to see who was going to make the big bucks on Saturday. The full story is below.

LAS VEGAS  – Saturday at The Strip at Las Vegas Motor Speedway was a very good day for Summit Racing Chevrolet Camaro driver Greg Anderson. Wheeling his swift Pro Stock car from under the KB Racing umbrella, Anderson claimed a record seventh K&N Horsepower Challenge trophy, and along the way he earned the 95th pole of his career in qualifying for the DENSO Spark Plugs NHRA Four-Wide Nationals.

The K&N Horsepower Challenge victory was Anderson’s third consecutive win in the special race that pits the best of the best in the ultra-competitive Pro Stock category against one another for the $50,000 purse and major bragging rights.

“This blows my mind,” said Anderson. “K&N has just been so wonderful to this class and this sport. It’s an honor to get that big check up there. That’s big money to us, and that will go a long way towards making these racecars go faster. I can’t thank K&N enough.

“Winning this deal today with my Summit Racing Chevrolet was a real confidence builder, and I needed that. It’s going to be a great day tomorrow, and I can’t wait. I’m going into it smiling. It’s already been a great weekend, and hopefully we can make it better tomorrow.”

The air and track temperatures were hot, and the desert wind was blowing fiercely, but the KB Racing crew had all the right answers all day long.

On the other side of the ladder, KB Racing-powered Bo Butner was making his way to the first K&N Horsepower Challenge final of his career in just his second time competing in the event. Butner got the best of Vincent Nobile with a killer .006 launch to his opponent’s .033 and a strong 6.716, 203.52 to beat a 6.718, 204.57. 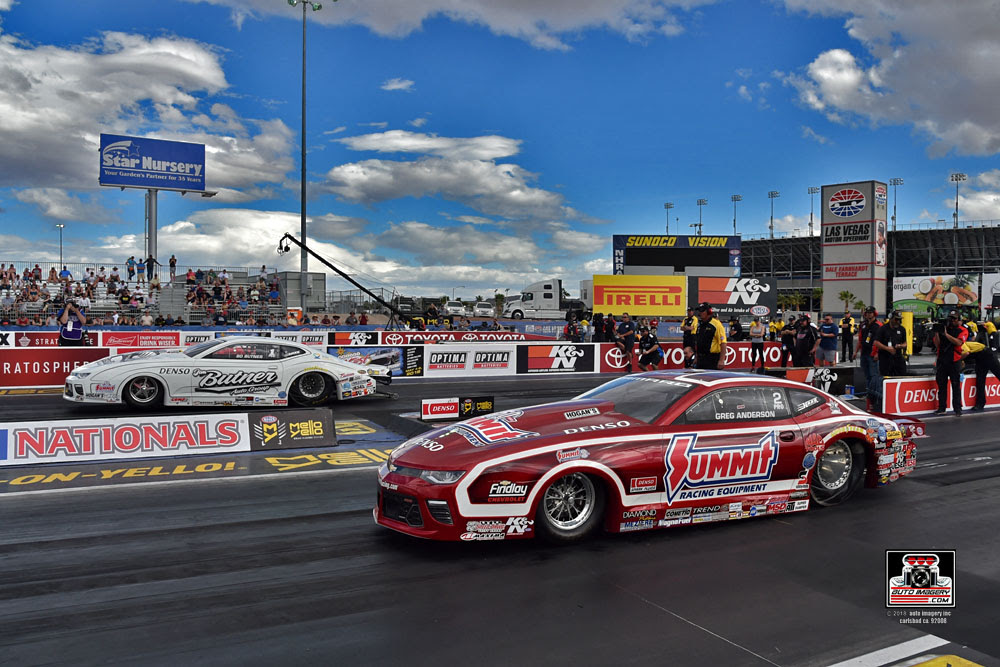 After the win, Anderson was brought to the pressroom for a double interview with the media to talk about the historic win and monumental No. 1 qualifier milestone.
“This is awesome,” said Anderson, who was low qualifier with a best time of 6.669-second at 206.45 mph. Anderson is No. 4 on the all-time No. 1 qualifier list across all NHRA Pro categories. “This is two No. 1 qualifiers two weeks in a row, so that obviously tells you I have a great, great Summit Racing Chevrolet. I’ve had a little bit of a sluggish start to the year, but it seems like this weekend everything is under me, it’s all up to me now to not mess it up, to pilot that thing down there and turn the win light on. I’ve got the car, I’ve got the engine, I’ve got the tune-up, the crew chief and the crew. It’s all up to me, and now I’ve got confidence. I haven’t had that this year. I think my year is about to turn around, and I couldn’t be more proud of my guys.”

Although Butner was certainly disappointed that he was not able to hoist the K&N Horsepower trophy created by renown Motorsports artist Tom Patsis of Cold Hard Art, the honor of racing in the final round in the prestigious event was not lost on the driver who qualified No. 3 for the main event on Sunday.

“We went one round more than we did last season in the shootout, and we lost to the same guy,” said Butner. “I’m very proud of Greg. He has his head on straight and a really good racecar. I’m proud of the KB Racing team in general. To get two cars to the final round and get that money and that trophy for Ken Black is a good day. Tomorrow is going to be a good race, and it’s going to be fun. I’m confident.” 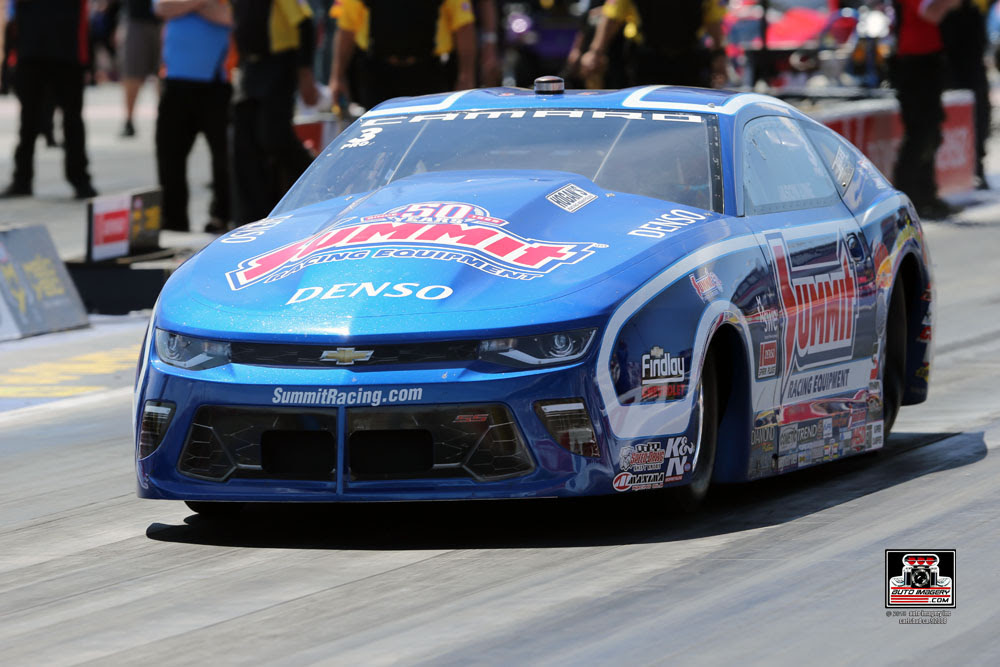 KB Racing’s Jason Line, driver of the blue Summit Racing Chevrolet Camaro, qualified in the No. 6 position for the DENSO Spark Plugs four-wide event with a best time of 6.709-second at 204.63. He will square off with Butner, Steve Graham, and Drew Skillman in the first round. Line is most impressed with the fresh racing surface at The Strip at Las Vegas Motor Speedway. The entire racing surface was poured fresh to accommodate the two extra lanes for this year’s four-wide event.

“I have to say, we’ve had a lot of new racetracks come over the years, and this is the first time that anybody has done it right on the first crack,” said Line. “They did a heck of a job, and my hat’s off to [The Strip at Las Vegas Motor Speedway Director of Racing Operations] Jeff Foster and everybody that was involved, because it’s impressive.”

A recent spate of misfortune for Line came to a head in the first round of the K&N Horsepower Challenge when he fouled out by .012-second. As his Summit Racing Camaro is showing signs of promise, Line hopes his luck will turn on Sunday in Las Vegas.

“I think right now, if you want to win, you need a little bit of luck,” said Line. “There are a lot of fast cars and a lot of really good race teams out here. We’re in the town of luck, so you better have some or you’re in trouble. That hasn’t been the case for me so far, but you never know. My Summit Racing Chevy has gotten better; it definitely has. It’s not where it needs to be yet, but it definitely has gotten better. We’ve made a decent run or two, and I’m definitely hopeful that we’re going the right way.”

Across the ladder, Anderson’s first-round quad will include Joey Grose, Vincent Nobile and Erica Enders.

Eliminations for the DENSO Spark Plugs NHRA Four-Wide Nationals are set to begin at noon PST on Sunday at The Strip at Las Vegas Motor Speedway.

Got A Blow Through Carb That You Want To Ditch For EFI? The Holley Super Sniper Can Do It! 1,250hp Capable 2018 Buffalo Motorama Photo Coverage: Turbos, Trucks, Race Cars, and Hot Rods!