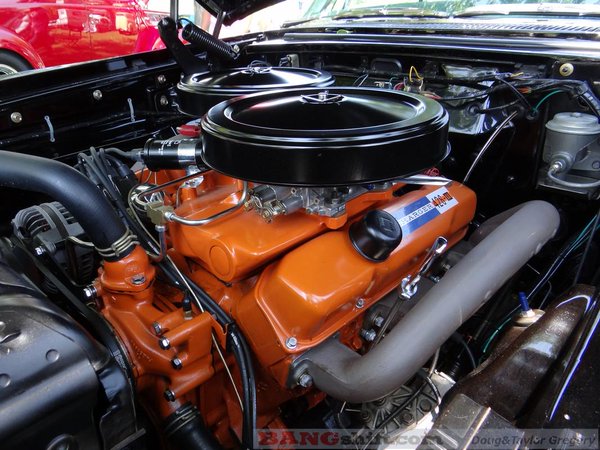 We have entered a multi-day stretch of legends here and the first two we arrive at are the vaunted 426ci Max Wedge and the 426ci Chrysler Hemi. So yeah we’re talking Max Wedge and Hemi engines today. Nothing wrong with that, right? The 426 Max Wedge engine was the top of the Chrysler heap and basically lead the company’s performance efforts until the 426 Hemi was ready to be unleashed on the world. That being said, we’ll start there first and hemi a little later.

Coming off the heels of the success the company had seen with the 413ci Max Wedge engine, they wanted more so that’s exactly what they got in 1963. The company decided to increase the bore and stroke to 4.25×3.75 respectively. That was basically the only change over the 1962 version of the engine. The heads were the same and internally the materials and other things like the camshaft were tweaked but largely the same. Offered in a 415hp version that had 11.0:1 compression and a full-competition 425hp version with a titanic 13.5:1 compression ratio, these were no wilting lilies on the road or the race track. Obviously the 13.5:1 compression version of the engine was not for use on the street as it would have detonated itself to death on pump gas in a hurry.

The end of the Max Wedge line came in 1964 with the introduction of the Max Wedge Stage III. The engine got blarger carter carbs, a sweet cross ram intake manifold, more camshaft in terms of both lift and duration, and heads that moved more air, more efficiently. Engineers even had the block notched to clear the valves. Weirdly the engines had the exactly same horsepower ratings and carried compressions of 11.0:1 and 12.5:1. We’re guessing the lack of an announced power change was an effort to keep the racing sanctioning bodies from busting their chops.

There was a more streetable version of the 426 wedge family for the 1965 model year. 365hp was the rating and it was a hydraulic cam, was less radical version of the killer race engines. Lastly the 426’s coolest application may be in the seldom seen Dodge A100 CSS pickup trucks of 1964-66. This was the 365hp engine and those were basically the first factory muscle trucks.

Let’s check out some dyno videos! Then continue on to see Hemi stuff!

….and now its time to honor the 426 Chrysler Hemi

People have written stacks of books on the history of the 426 Chrysler hemi so forgive us if we don’t go that route. That being said, we (like most other people) dig the hell out of the classic hemi and it never fails to get our attention in classic cars, hot rods, or drag machines.

As good as the Max Wedge was on the drag strip, it was not cutting the mustard to the level the Chrysler guys wanted it to on the NASCAR circuit so that was one of the reasons that engineers went back to the hemi headed design for what became the ultimate RB engine in that platform’s lineage. The official name for the Chrysler hemi is, “Chrysler Corporation Hemispherical Combustion Chamber Maximum Performance Engine”. That’s stiffer than an overly starched collar but it reads pretty damned well, right? Hey, never let an engineer name something.

In 1964 and 1965 before the emergence of the street hemi, the race engines came in all different varieties. Drag race versions had a couple of carbs, the stock car stuff had one carb, those engines (depending on where they were being used) had some internal differences in terms of components, even displacements were played with. Drag racing engines were rated at 415 or 425hp while the NASCAR engines carried a 400hp rating. The 1964 Daytona 500 was the engine’s coming out party and what a party it was with Chrysler locking down the top three positions. After Bill France decided to ban the engine (because it was not available for street use) Chrysler went ahead and launched the street hemi program, and the rest is history.

The block used in hemi engines is modified from a standard RB with stuff like cross bolted main caps. Forged steel cranks were used along with forged steel rods, forged aluminum pistons, and a solid lifter cam. The iron street hemi heads used 2.25″ intake valves along with 1.90″ exhaust valves. Another difference was how the heads were attached. 17 points of contact as with a 413 or 426 wedge but the top four were studded instead of bolted. Hydraulic cams were introduced to the street hemi in 1970.

The legend of this engine lives on as strongly today as it did when it was new.

Check out these hemi videos! The story continues below them!

Yes there is a 426ci version of the “late model” Generation III hemi. The engine appeared in Mopar catalogs as a crate mill in 2010 and it was a pretty brilliant marketing move to bring the legendary 426ci displacement back for their hardcore fans.

Making more than 500hp with forged guts and a bore/stroke of 4.0×4.125 it is a siamese bore style block and by all accounts these things are built like an anvil with billet main caps and other provisions for the stomping that anyone would give it once installed in a car. Rated at 540hp naturally aspirated this sounds like a fun maker for sure.

This 426 engine was offered and we believe continues to be offered as an option for buyers of Chrysler Drag Pak cars.

Crowded House: The VW ID.4 Is The Latest, Most Capable, and Least Expensive Addition To The Electric Car Lineup In The USA Project Binky Update: This Bitchin All-Wheel Drive Swapped Mini Is Ready For Reassembly And A Good Thrashing