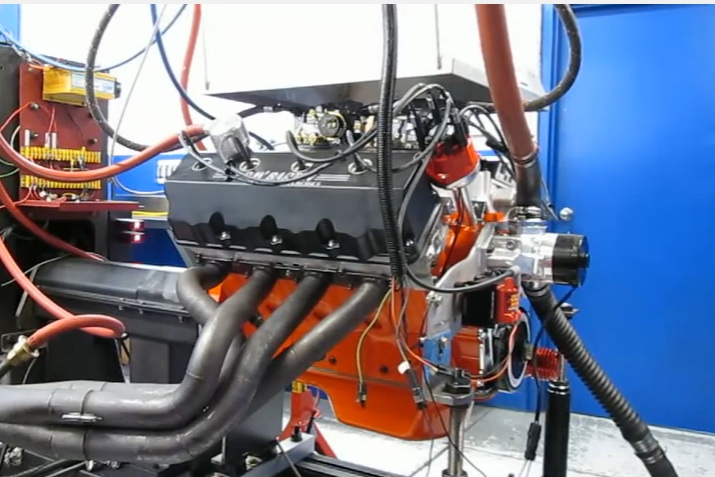 While others may forget this day or think it is just like the other 364 in the year, we here at BangShift know better. We know that 5/28 is the international day of celebration for the 528ci hemi and we’re going to recognize this romping, stomping engine with some dyno videos below. With the advent of the after market and more meaty 426-style hemi block displacements of these engines can be found up to and over 600ci but the 528 is probably the best known as there are a few places that sell this combo as a crate package. Making huge power and big torque on only gasoline and air, it is a nice package for anyone with the need (and the room in the engine bay!) for it.

These two engines are good lookers with their orange block paint and yes, those valve covers do say “Ray Barton Racing Engines” on them so you know that power is not going to be lacking here. One of them makes something like 750hp and it is all in by about 6,500rpm so that’s pretty awesome. Lots of power at a usable level and some rumpity but overall decent manners down low.

We have no idea where these two engines ended up but we can tell you that whatever they are powering has the ability to smolder the tires at the drop of a hat!

PRESS PLAY BELOW AND WATCH THESE TWO 528 HEMIS ROAR ON THE DYNO!

Monaco Memories: Listen To The Greatest Living Formula One Racers On Earth Tell Their Stories About The Monaco Grand Prix Holy Crap, This Might Be The Baddest Throttle Body Ever Invented! Serious Game Changer. The ICON 102 From Motion Raceworks