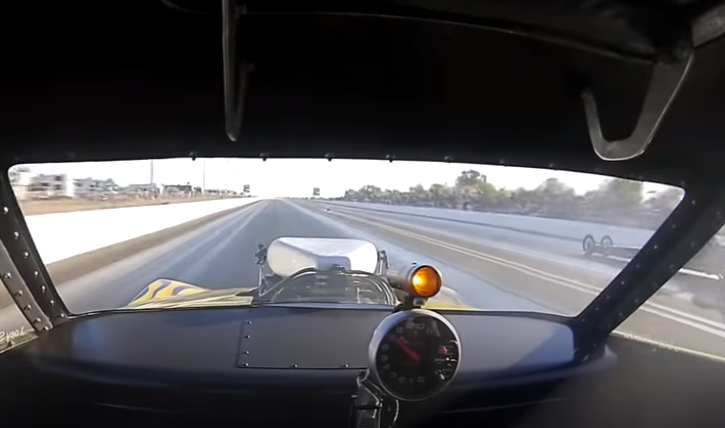 I’ve raced a lot of different cars over the years, but a Funny Car and Front Engine Dragster are NOT on that list. Yesterday while cruising Facebook our friend Jesse Adams put a link up to this video for the #topendchallenge that seems to be the craze on Facebook at the moment. It’s a fun video as you watch Jesse in the front engine dragster in the right lane, get out on the Funny Car driven by Joey Steckler pretty quick, and then lift the front wheels off the ground a couple times going down track. These guys were racing in the finals of 7.0 Pro at the California Hot Rod Reunion, a class that does not allow any electronic timing equipment. No throttle stops or timers or any of that bracket racing stuff, just two dudes tuning their cars to run the number which in this case is 7.0. I never cease to be amazed by the fact that these cars run 7.0 A LOT! This is a tight class, that is made up of all kinds of fun rides.

If you aren’t familiar with 7.0 Pro, it basically is this. Make your junk run as close to 7.000 as possible without going under. Guy to the finish line first, wins. Oh, and your junk must be a center steer altered, front engine dragster, or pre-1980 bodied Funny Car that runs a supercharged combo on alcohol, or an injected combo on nitro. Yeah, it’s about as bad ass as it sounds. Definitely fun to watch as anyone who has seen Ron Huegli behind the wheel of the Tikki Warrior can attest. He does full track burnouts and backs up at 60 mph before each and every run. All in 7.0 Pro. It’s rad.

So How Quick And Fast Is A Shifter Kart? The Guys From Fasterproms Take Their's To The Dragstrip To Find Out! Ever Wonder How They Make Those Wood Rimmed Steering Wheels Found In Old Muscle Cars And Classics? Here's How.