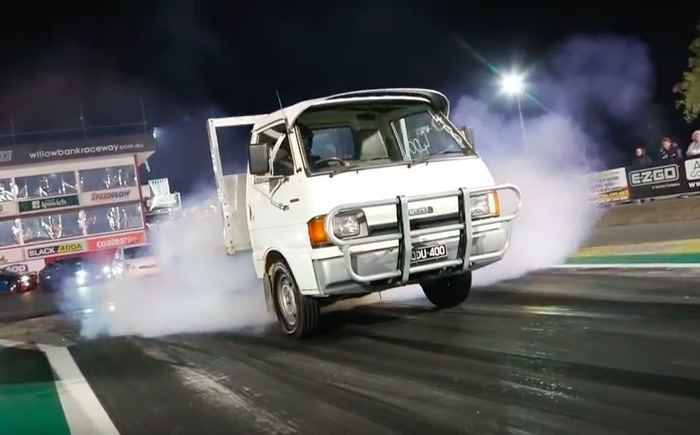 Dave Reid of Drag Videos Australia tipped us off to this footage that features a Mazda E2200 cab-over flatbed truck running 12s at the drags. The secret to this truck’s speed is hidden under the cab but thankfully Reid got the scoop and the story is that the rig is powered by a Toyota 1UZFE V8 with a turbo on it! We have no idea what kind of power it is making but this thing cannot be that light and it is about as aerodynamic as the building I am sitting in while writing this so the engine has to have some suds for sure.

The 1UZFE engine was the first in a line of motors that were produced from the late 1980s right through 2013. These include the engines that you’d find under the hood of vehicles here in the states like the Tundra, Sequoia, etc. A four cam V8 with 32-valve heads, and six bolt mains, the engine was a direct descendant of the power plant Toyota developed to compete with in the CART series.

We’re not being disrespectful when we say that this dude’s engine is pretty mild because judging by the sounds of how these engines were built with forged cranks and rods, 450hp seems like a nice reliable tune up that will allow the truck to work its normal job hauling stuff and then go embarrass people all night long at the drags.

As luck would have it in this video he is lined up next to some fast stuff but we cannot imagine how many people have been handed their lunch by this unassuming looking truck. We have seen plenty of sleepers out there but we have never seen one made out of a Mazda flatbed. Well done!