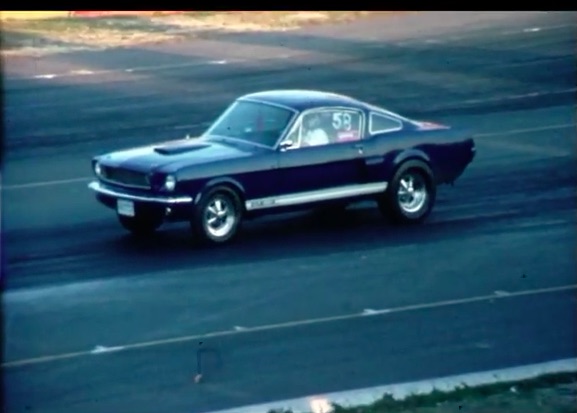 I love these types of videos. Why? Because they really take you to a normal day at the drag strip decades ago and you realize that a normal day at the strip back then was about the same as it is now, especially in what seems to be a test and tune format. The video you are about to watch was made at the famed Orange County International Raceway in California. By the looks of some of the trucks and stuff in the film it was made in the later half of the 1970s. The cars are almost universally awesome. This is all sportsman drag racing with one funny car thrown in for good measure. The fact is that you are going to see vintage muscle cars and gassers in an informal and neat setting. The track had al kinds of stuff that was pretty edgy at the time, including scoreboards…that were at the starting line and required the numbers to be manually entered into them so that they would show.

If I was picking a favorite car here it would probably be the early Mustang GT350 with its Cragar wheels and quick shifting driver. Who knows what became of that car or what became of any of these cars, right? One of the neatest fun facts about this video is that somewhere in here, Chad Langdon the dad of current NHRA super star Shawn Langdon is shown. We have no idea which car is his but he’s here!

This 1991 IHRA Video Known As Crash-O-Rama Has Some Big Names And Big Carnage In It! The Most Unique Flat Track Motorcycle Race In America Is Not Flat At All - The Peoria TT Is As Radical Now As It Ever Was