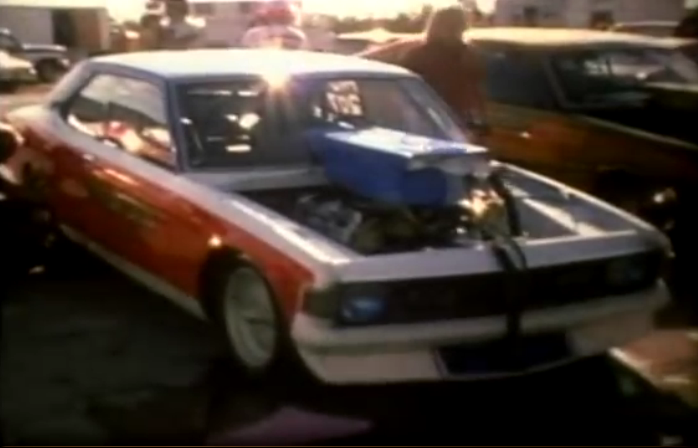 We learned of this video from our friend Dawn Mazi-Hovsepain and it rules all! Shot at Miami Hollywood Speedway in 1975 it features some of the best Pro Stock drag racing footage of the era, unfortunately it doesn’t feature sound, but the visuals are flippin’ awesome! You’ll see Dyno Don, Bob Glidden, Gapp and Roush, Ronnie Sox, Roy Hill, and a host more giants of the day. More importantly you’ll see their bad ass Pro Stockers slugging it out, pulling dry hops, and hauling the mail down the 1320!

Some stuff to note. By 1975 the Lenco had become a must have piece on Pro Stock. Even shifter handle wizards like Sox could not match the swiftness of the brutal Lenco in making gear changes. Dyno Don was the first guy to have one and the first to win with one in 1973. Like most things in drag racing, once the concept was proven by a trip to the winner’s circle, the transmissions became a hot commodity.

Also, this video is probably one of the best to show the ill-fated Hemi Colt style Pro Stock in action. One of the few cars to ever be outlawed by the NHRA, they were disallowed from the Pro Stock category in the late 1970s. Lots of them wrecked and you can see why in this video. They were narrow, short cars and could be very twitchy at speed. Renowned racer Don Carlton lost his life while driving one in 1977.

Lastly, the stances that these cars possess are probably the coolest in drag racing history. With all that tire tucked up in the rear of the car and a knuckle dragging, bumper scraping look in the front, these cars all look 100% ready for battle. There are some eye level shots of the cars pulling dry hops and launching. It is killer to watch the weigh transfer from front to back when the drivers step off the clutch in low gear to test the track’s grip!

Press play and make your own engine noises while enjoying this walk down Pro Stock memory lane!

Video: Watch A 1924 Doble E Steam Car Tear Down The Road And Hit The Trails This Drag Racer Lives By The Mantra Of "Never Lift" And It Sure Makes For A Good Show