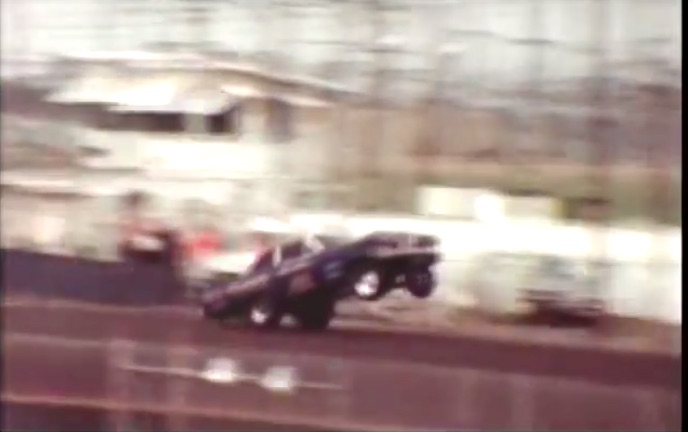 Now this video is AWESOME. Taken from the stands by a fan in what is reported to be 1966, it captures plenty of full quarter mile tire smoking runs and more importantly it captures some of the awesome early funny cars in action. Most notably for us is the wild, nearly uncontrollable A/FX Falcon of Hubert Platt. This thing acts like a modern radial car with its multiple wheelies per run. The home-built creation was basically constructed with the main motivation being spite because Platt was angry Ford had not stepped up and supported his efforts. The 427 powered Falcon was designed and built to ruin as many race days for Fords, Chevrolets, and Dodges as it possibly could.

Dick Harrell’s screaming red Nova is seen in the video as well. Many of the dragster runs as shown in “slow motion”. We’re not sure if that  is an effective digitizing the 8mm film or what but it is really nice to watch the smoke funnel off the rear tires during their runs.

It becomes evident why people latched onto the early funny cars and every other iteration as they evolved. The dragsters do not present near the show “billboard” that the full body cars do and the show element of the A/FXers sure seems stronger as well.

Now, the last thing and the elephant in the room. Every freaking time we run photos of an event we hear people say, “There’s no one in the stands, drag racing is dying all over America. When I was a kid the track was packed every day, week, month, and year. It is a sad state of affairs. We sat and watched everything! Test and tunes had the places jammed!”

On this day Lions is a ghost town. Its the same today as it was then. Some shows are homer runs and some shows aren’t. 52 years go or 52 minutes ago, the game remains the same.