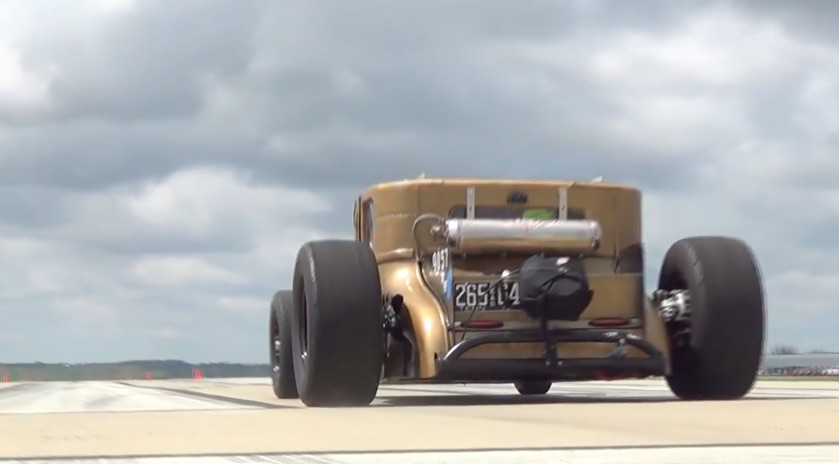 The weathermen said is was a lost cause, some people who believed their smart phones stayed home but the racers that showed up because they’re….racers had a kick ass Sunday at the Ohio Mile. The fog burned off in the morning and we were literally greeted with the most spectacular weather of the weekend.

There were a ton of 200+ mile per hour runs and there was even some good old fashioned drama in the closing minutes of the event when Brian Acton made a last ditch, all-out attempt to take the Super Street title in the Hot Rod Magazine Top Speed Challenge that was also being run as part of the event. In the end he fell a few mph short but the drama level was high as he was chasing C. Douglas Johnson’s 222mph twin turbocharged Mustang with a blown third generation Firebird that was also being hosed with nitrous. With just minutes to spare Acton came to the line with Johnson literally right behind him. When the hail mary pass fell about nine mph short, the Johnson group was assured the win and they were rightfully happy.

Jay Bell was the winner of the Real Street class after making a 229mph blast on Friday. The fastest car of the meet belonged to Ron Keslowski who managed a thundering 233mph pass out of his Circle Track class entry. The fastest motorcycle of the event belonged to Ransom Holbrook with a 244mph run on his nitrous assisted Hayabusa motorcycle.

You will see LOTS of runs in this video. Some from the starting line, some from the finish and some from various points on the race track. This was a fantastic weekend of racing and we’re thinking you need to come out and see the action for yourself June 18th and 19th!

Want To Roll Like A Baller Gearhead? Take A Look At This 2011 Chevrolet Camaro Limousine! eBay Find: This 1965 Ford Econoline Pickup Is As Sweet As They Get! Who Wants A Snub-Nosed Pickup?