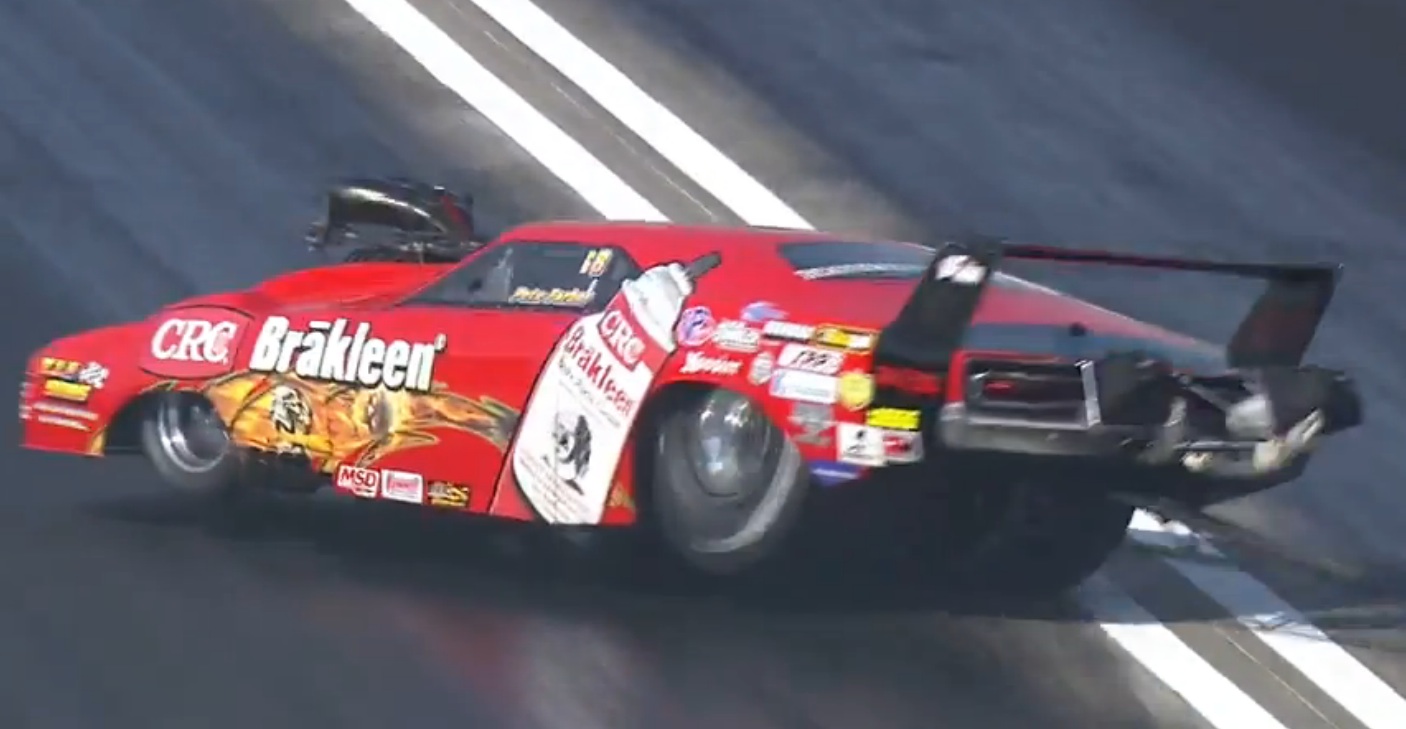 We were setting up here at the Ohio Mile when I got word that Peter Farber had suffered a crash at the NHRA race in St Louis. My heart sank because Pete’s been having the best year of his NHRA pro mod career in 2014 and he was poised to finish really strong in the points and the whole thing was just looking really good for him. I finally got to see the video of the crash and it exemplifies the driver that Pete is because to the untrained eye it is one thing but when you really pay attention to what happened, Farber kept a bad deal from become wholly different. How? The video tells the tale.

The long and short of the crash is that the car got super out of shape early in the run and Peter hung onto it as best he could. The machine ended up heading toward a virtual head-on collision with the retaining wall when Farber was able to wheel ‘er around and take the impact from a frontal one to a side one, munching the driver’s door, rear quarter, and undoubtedly bending a lot of stuff under the body. Where his ability as a professional drag racer comes in is illustrated in the portions of a second after that happened. The car began to shoot across the track with the throttle open, presumably from the impact and Farber (we’re speculating) likely had to pull the pedal back with his foot to close the throttle blades. He did this before the car rocketed into the wall on the other side of the strip. Watch the video a couple of times to see what we mean.

Now, when you want to know how committed Farber is to this whole pro mod program understand that he plans on having a car (this car?!) at the NHRA pro mod finale at Las Vegas in November. That’s about a month away and there will be no sleep for him, his guys, and whoever will be fixing and welding this baby back into shape. Like he illustrated by not giving up on the run after the crash and saving his own bacon, Farber’s got some steely resolve to make his mark at the end of the 2014 season. We’ll keep you posted on his progress…this is going to be a thrash!

Lift Off Video: Watch This Camaro Launch, Get Vertical, Drag The Bumper And Land On All Four! Question of the Day: What FWD Car Would You Nominate For A RWD Conversion?