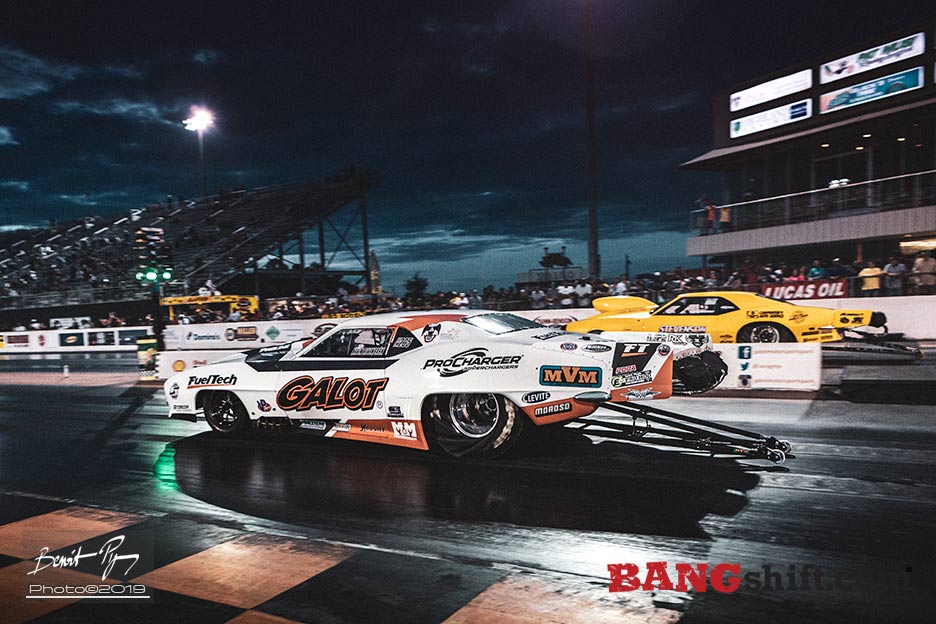 (Words by Greg Parker/ Photos by David Whealon and Benoit Pigeon) When the Mad Mule Shootout weekend comes to GALOT Motorsports Park, it never fails to bring the best racing. Seven different classes and near perfect racing conditions always brings a good car count and lots of speed and competition on the track. Here is what happened today at GALOT.

Starting off Top Junior Dragsters, it was Cale Pittman facing off with Bladen Core in the first semifinal race. Cale dialed up 8.75 and Bladen dialed 9.05. Cale’s reaction time was .018 seconds to Bladen’s .050. Cale ran 8.764 to Bladen’s 9.111 giving Cale Pittman the smaller package and the round win. Cale’s brother Bryce Pittman was the other semifinalist, and automatically advanced to the final round with a bye run thanks to his prior reaction time. So, with Cale Pittman in the left lane and Bryce Pittman in the right lane for the finals, dad Mark Pittman was running back and forth between the cars while they were getting set to stage. When the tree dropped, Cale lit up the red light by .010 seconds, handing the event win to his brother Bryce. Needless to say, the conversation should be good on the way home for the Pittman clan.

In Pro Junior Dragsters, the first semi featured Miles Luther and Jayden Lawler. Lawler had the better reaction time, but could not run close enough to the 7.90 index. Luther overcame the starting line disadvantage and came away with the better package to take the round win. In the second semi of Pro Juniors, Melaine Sheets lined up next to Chase Carter. Carter had a slight starting line advantage, and Melaine ran under the index trying to make up for lost time, breaking out by .002 seconds. In the final round, Miles Luther had the better reaction time over Chase Carter, but as it turned out, both green lights didn’t matter, as both drivers broke out, but Miles Luther broke out by less, taking the event win in Pro Junior Dragster.

In the 32 car bracket shootout, the first semifinal had Jeff Parrish going up against Robert Ragland. Parrish dialed 5.64 and Ragland put up a 5.23 dial. Ragland had a .037 tree and ran 5.241 on his dial, but got the win anyway when Parrish lit the red light by .009 seconds. The second semi had Blake Denton lined up next to Terry Williams. Blake dialed 4.49 and Williams predicted 6.46. Williams had a .017 reaction time and ran 6.48, while Denton ran 4.496 on his dial, but again the red light bandit strikes with Blake leaving .034 seconds early. In the final round, Robert Ragland dialed 5.23 and Terry Williams dialed 6.46. Williams had a big starting line advantage, but gave it away by breaking out. The bracket shootout winner tonight is Robert Ragland.

In the 4.70 index class, the first semi had Donnie Gibbs, Jr. facing off with Matt Hicks. Hicks had a perfect .000 reaction time but broke out by running under the index, but wait, he still gets the win light in this round due to Gibbs lighting up the red bulb on the bottom of the tree by .002 seconds. Tommy Luther got the free pass to the finals with a bye run in the semis. So both Matt Hicks and Tommy Luther come to the line for the finals and do their burnouts. Then, something goes wrong with Tommy Luther’s car, and Matt Hicks gets a free pass down the track for the win in the 4.70 index class.

Now let’s talk big power on small tires, heads up, first to the line racing, the 28/275 class. First up in the semifinal round, we have Dace Horne and Jason Tyson. Horne has the advantage at the tree, but Tyson wastes no time getting around him and getting to the line first for the round win. The other half of the semifinal round brings up Johnny Fast and John Phillips. Phillips overcomes a small starting line disadvantage and gets to the stripe first to take the win. In the final round of this class, John Phillips had a good sized reaction time advantage, but Jason Tyson catches him by the 60 foot cone and never looks back, taking the win in the 28/275 class.

Now, it’s time to talk big tire cars. The first semifinal race features Robby Keziah and Danny Perry. Keziah gets off the line first and crosses the line 4.051 seconds later, and uses his good reaction time for a baby hole shot win over Perry. Number 1 qualifier Travis Harvey takes the bye run in the semifinals to go straight to the finals against Robby Keziah. In the finals, Travis Harvey takes the tree with a .088 reaction time and Robby Keziah has a .072. Keziah has some tire shake and has to lift, but Harvey puts his foot through the floor and makes a statement with a 3.988 second run for the win in Renegade class.

GALOT Motorsports Park would like to thank everybody that came out for this event. All the drivers and teams, the fans, the vendors, and the staff. And a special thank you to all that purchased the “Go on Pink” breast cancer awareness shirts. 100% of the proceeds from the sale of these shirts will go to 2 local families dealing with the effects of breast cancer.

Coming up next week, our normal test and tune on Thursday night, and then Halloween Havoc on Friday through Sunday. More on that soon!!

100% BangShift Approved: This 1964 Opel Kadett Wagon Is Kind of Weird, Kind Of Rough, and 100% Totally Awesome 2019 Keeneland Concours D'Elegance Coverage: A Collection Of Everything European!