The one thing that stands out about Ratty Muscle Cars events isn’t that the cars are wicked fast, or that they are just rough versions of dream machines. It’s that they are used and not with kid gloves, either. Proof of point: the nicest cars on the property were getting just as rowdy as the purpose-built beaters who were designed to be moss-covered, dented and faded street hustlers. The lone Ford Maverick that showed up blasted Muletown Dyno’s rollers to the tune of over 500 horsepower and torque in the six hundreds. Dylan McCool was dry-launching his Cordoba in the back forty trying to figure out an off-the-line bog. I had my wife’s car, and all of it’s maybe 100 mildly irritated horsepower, in the burnout box lighting up at least one rear tire for all it was worth just for the hell of it. If there was a skidpad or a burnout arena, you can bet that most, if not all of these machines would be out there tearing donuts, cutting up and showing their ass. That is the point to the whole Ratty Muscle Cars movement: it’s just a car. Go out, do stuff and have fun with it.

The natural beauty of the day and location is one thing…touring through leafy backroads and fields of cotton in the middle of baling was amazing. But the most beautiful thing of all caught just about everybody off guard. A few days before the rescheduled event, J.D. Posey, the man with the beaten but beastly 1980 Dodge Aspen A38 that we featured, passed on. He had been at every one of these deals, and before that was a well-known and well-respected racer in the region. Suffice it to say that I was not expecting the Aspen to come rolling through the gates early in the morning. His sister, Pam, had brought the car in as one of J.D.’s last requests, and while there were tears around that story, there were plenty of smiles as well as she wheeled the Dodge around with everybody else. 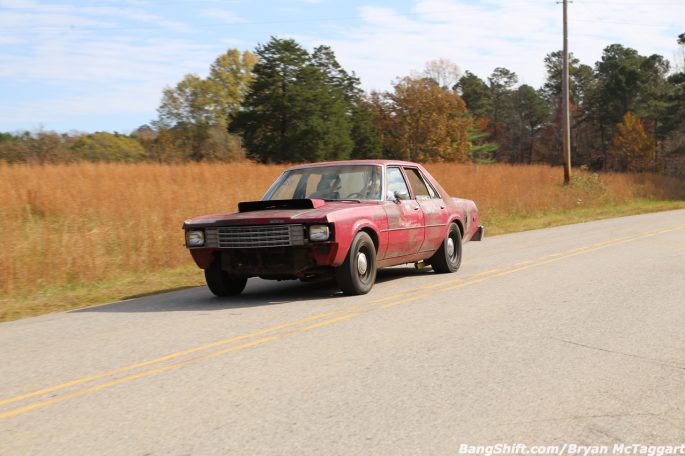 Just before I left to make the trek back north in the Great Pumpkin Mustang, McCool and I had one last chat with Austin, and the sum of the conversation was this: we needed this Saturday. We needed to get out of the house, surround ourselves with friends, and enjoy one last gasp of nice, warm weather before we’re stuck inside for the winter. We needed this breather from the bullshit of this year. We needed to get into an old car and just go for a drive, and maybe let it all hang out a little bit before we settle back into the sofa and start dreaming of a turkey dinner.

And maybe, just maybe, we might do this again in the spring. 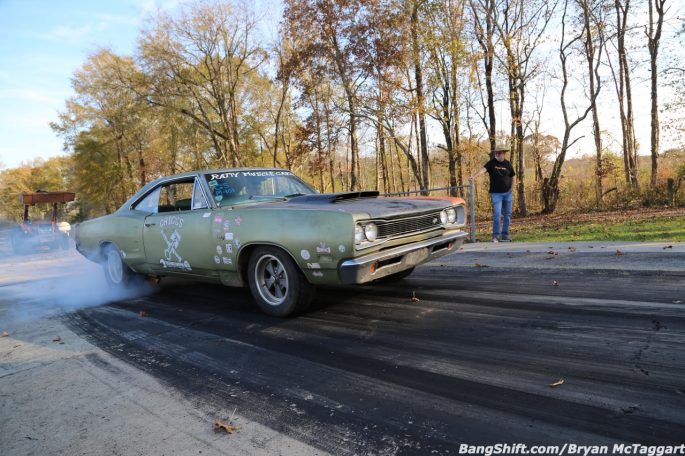 If you missed our last gallery, CLICK HERE to check it out, and be sure to click on a photo below to see more from Mopar Vs. Brand X!

Not A Supercharger: This All-Billet Four Rotor Engine Build Is Awesome And Wild! Spin Cycle FTW! Check Out This Collection Of AWD Donuts!