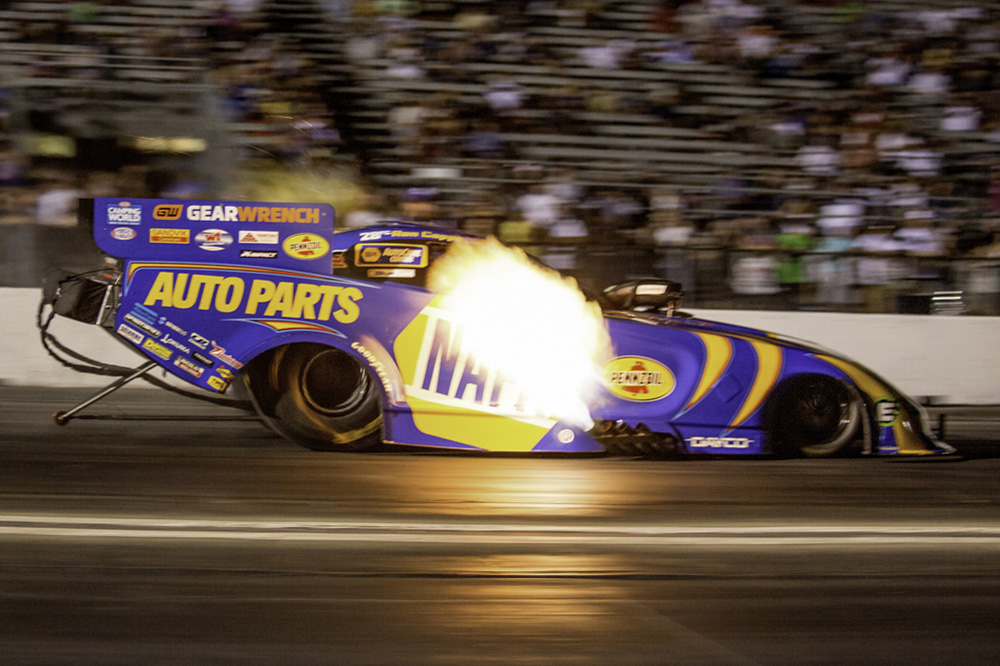 Aaron Stanfield won in Pro Stock and Matt Smith in Pro Stock Bike also won their respective categories at the 10th race of the 2021 NHRA Camping World Drag Racing Series season and the final event of the Western Swing. 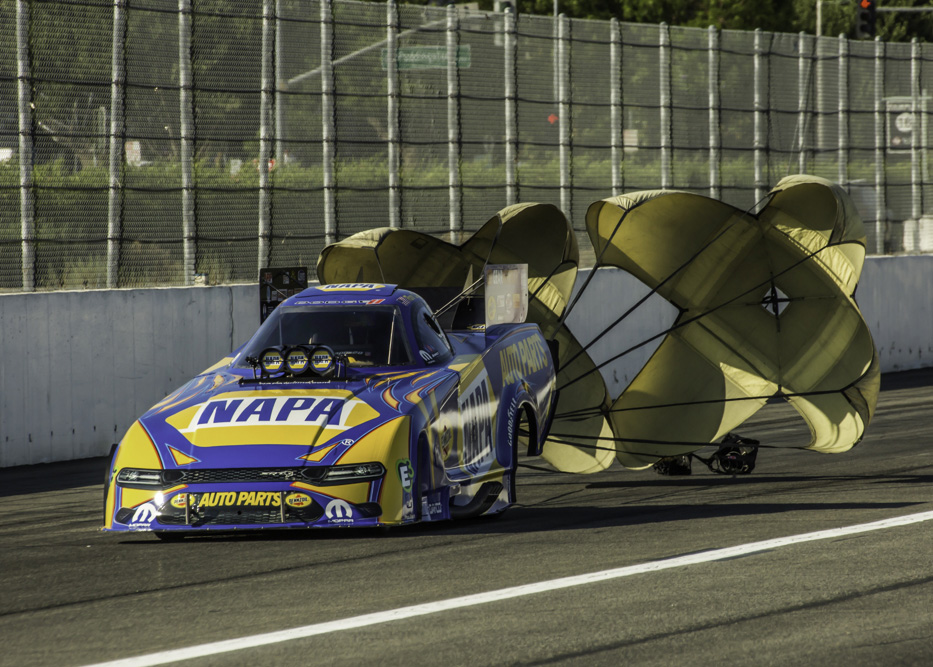 Capps, who also qualified No. 1 on Saturday, grabbed his first win of the year by going 4.151-seconds at 297.75 mph in the final round against J.R. Todd in his NAPA Auto Parts Dodge Charger SRT Hellcat. It is the 67th career win for the former Funny Car world champ and gave him the points lead. Capps conquered the rigorous conditions at Pomona on Sunday, knocking off Bobby Bode, Bob Tasca III, who held the points lead going into Sunday, and longtime rival John Force to reach the final round. He quickly tracked down J.R. Todd in the finals,

“I was hoping a win was coming,” Capps said. “This team, time and time again, they’ve given me one of the coolest cars to drive and this (weekend) was one of the most extreme conditions we’ve ever had. To do it at Pomona in the summer, with all my friends and family here, I can’t even tell you how amazing it is. We’re going to have a blast (celebrating).” 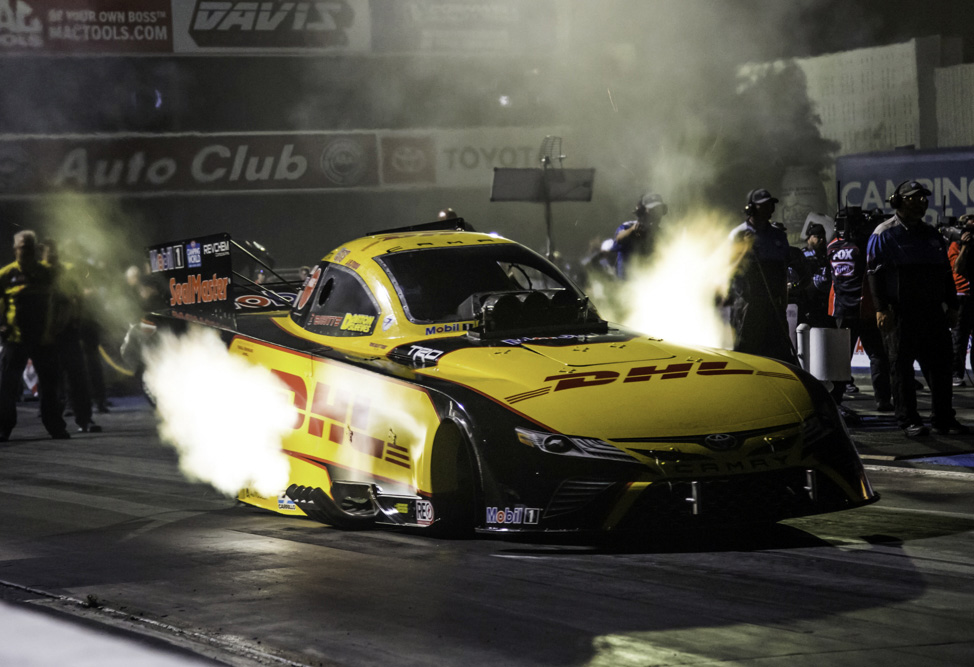 Todd reached his third final round this season and 38th in his career thanks to round out wins against Jeff Diehl, Robert Hight and surprising Jim Campbell.

In Top Fuel, Pruett capped off the Western Swing with her first win since 2019, going 4.021 at 247.61 in the final round in her 11,000-horsepower Sparkling Ice Spiked dragster. She was set to take on Justin Ashley in the final round, but Ashley wasn’t was lifted from the cockpit prior to the green light, clearly affected by heatstroke. After advancing to the final round in Sonoma, Pruett finished the job a week later at her home track, picking up her ninth career win in the process. Pruett qualified second and made a trio of consistent runs in qualifying before knocking off Steve Chrisman and Mike Salinas to reach the final round. It puts Pruett on an impressive path heading into the second half of the 2021 NHRA season. 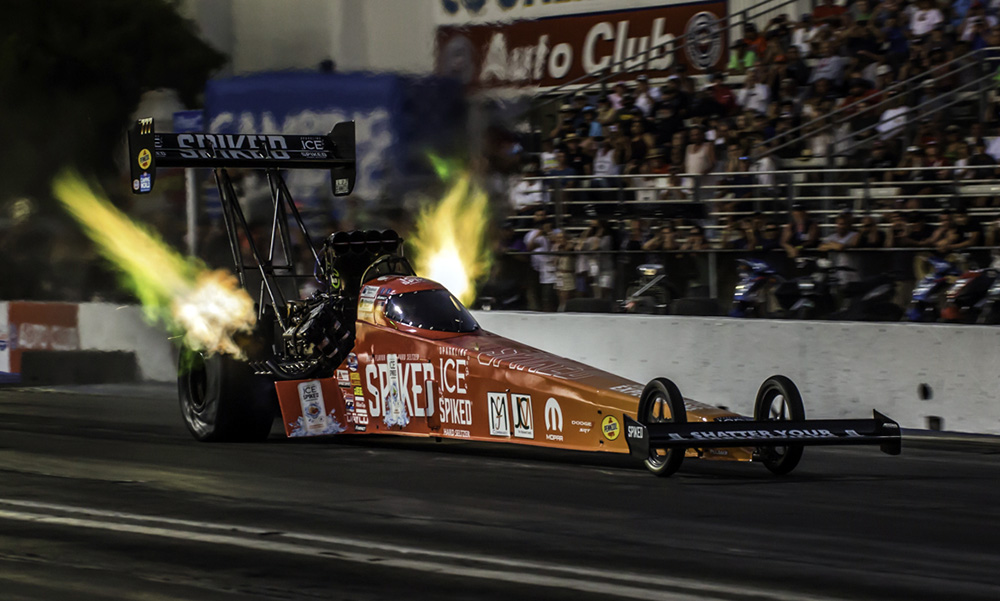 “This is about the perseverance of this team,” said Pruett, who moved to fourth in Top Fuel points on Sunday. “We’ve had a lot of dedication and to do this at our home track, it’s phenomenal. Thank you to everyone who has stuck with us and we dug deep. It’s been a long time since I’ve seen a Wally and today has just been incredible. We’re going to enjoy this.”

Ashley advanced to the final round for the first time this season and second in his young career, knocking off Buddy Hull, No. 1 qualifier Brittany Force and Antron Brown. Points leader and three-time defending world champ Steve Torrence saw his bid to sweep the Western Swing end in the first round when he lost to Brown.

Stanfield stayed red-hot in Pro Stock, picking up his second straight win and third in four races by knocking off points leader Greg Anderson in the final round with a run of 6.652 at 207.69 in his Janac Brothers Chevrolet Camaro. It’s the second time in this recent stretch that the young standout got the better of the veteran and four-time champ in the final round, also denying Anderson the chance to pick up his 97th career win and tie Warren Johnson for the most in Pro Stock history. 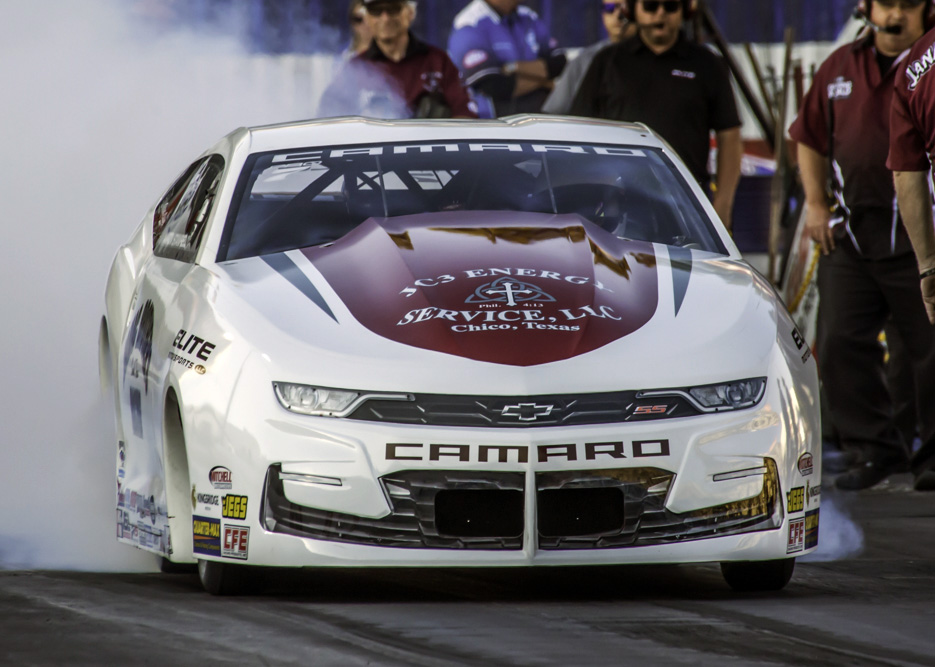 Stanfield, though, is putting together his own championship resume this season, beating Kenny Delco, Matt Hartford and Elite Motorsports teammate Erica Enders to reach the final round. He never trailed against Anderson, picking up his fourth career win and inching closer to the points lead.

“I’ve got some great guys working on my hot rod and if I can stay doing my job behind the wheel, I think we’ve got a great shot (to compete for a championship),” Stanfield said. “To win back-to-back races, I couldn’t have dreamed of this. It’s cool to race against Greg and that milestone he’s trying to accomplish, but I’m glad we got him stopped today.”

Anderson advanced to his fifth final round this season and 163rd in his career with victories against Chris McGaha and KB Racing teammate Kyle Koretsky. He’ll look to tie Johnson’s mark for all-time wins in Pro Stock in two weeks in Topeka. 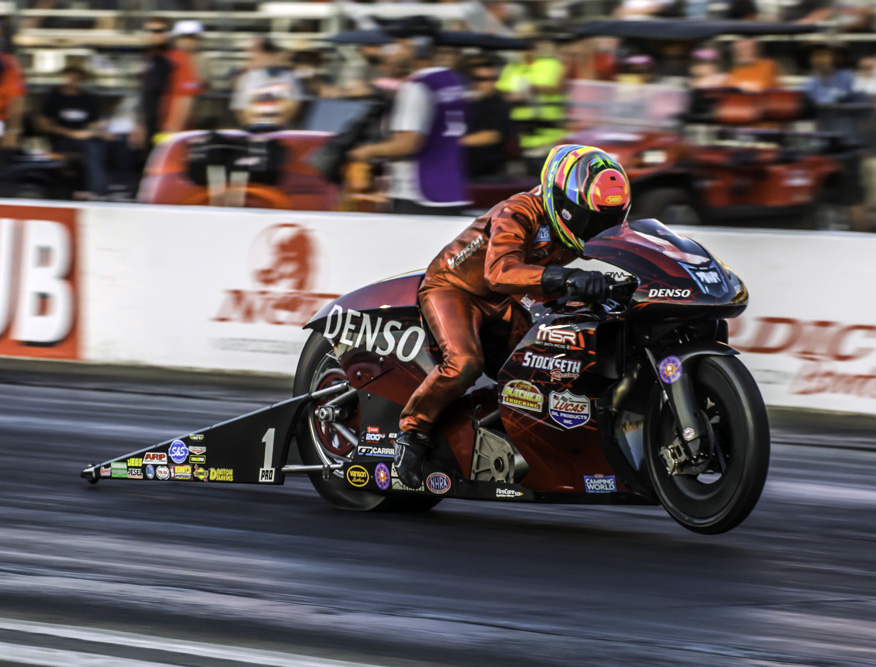 Smith continued to stay a step ahead of everyone in Pro Stock Motorcycle, picking up his fourth win this season on his Denso Auto Parts/Stockseth/Matt Smith Racing EBR after a pass of 6.828 at 199.52 in the final round against Angelle Sampey. Smith was the No. 1 qualifier by a wide margin and rolled through the field on Sunday, earning round wins against his wife, Angie, and teammate Scotty Pollacheck before cruising to the win against Sampey. He maintained his healthy lead in the points standings and picked up his second win on the Western Swing as well.

“It was hot out there and that was the biggest thing, just fighting the track with it being this hot,” said Smith, who now has 30 career wins. “But we got it done, qualified No. 1 and were almost low every round. I knew what we had to do in the final and we laid down a great run (in the final). I can’t say enough about the people who help us. We’ve got a great team.”

Sampey advanced to her first final round of the season and 75th in her standout career by taking out Jim Underdahl, Joey Gladstone and Vance & Hines teammate Eddie Krawiec. She also moved to fourth in points. 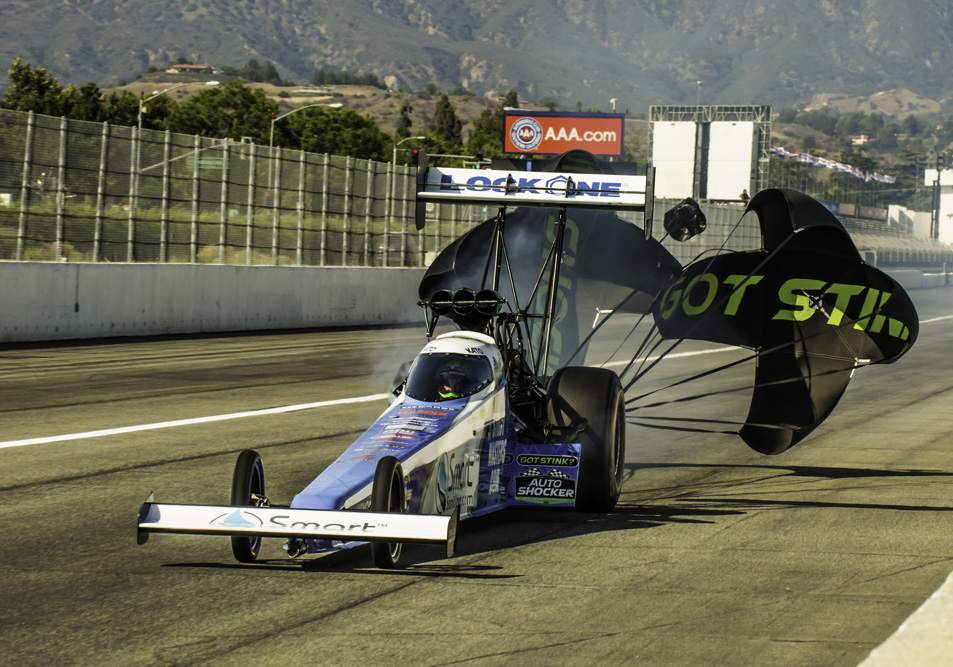 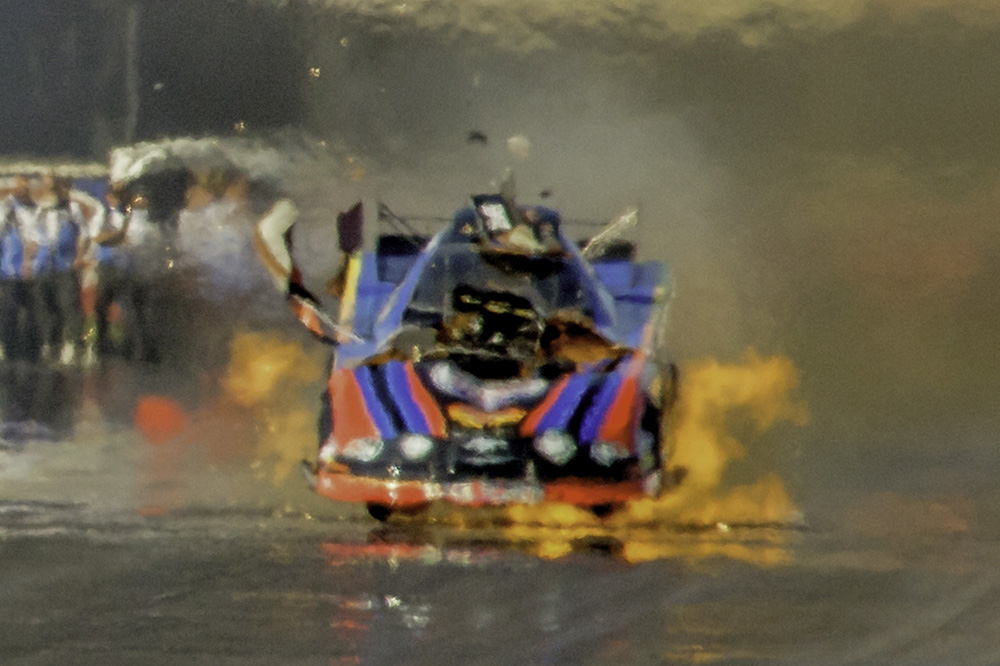 POMONA, Calif. — Sunday’s final results from the 61st annual Lucas Oil NHRA Winternationals presented by ProtectTheHarvest.com at Auto Club Raceway at Pomona. The race is the 10th of 20 in the NHRA Camping World Drag Racing Series: