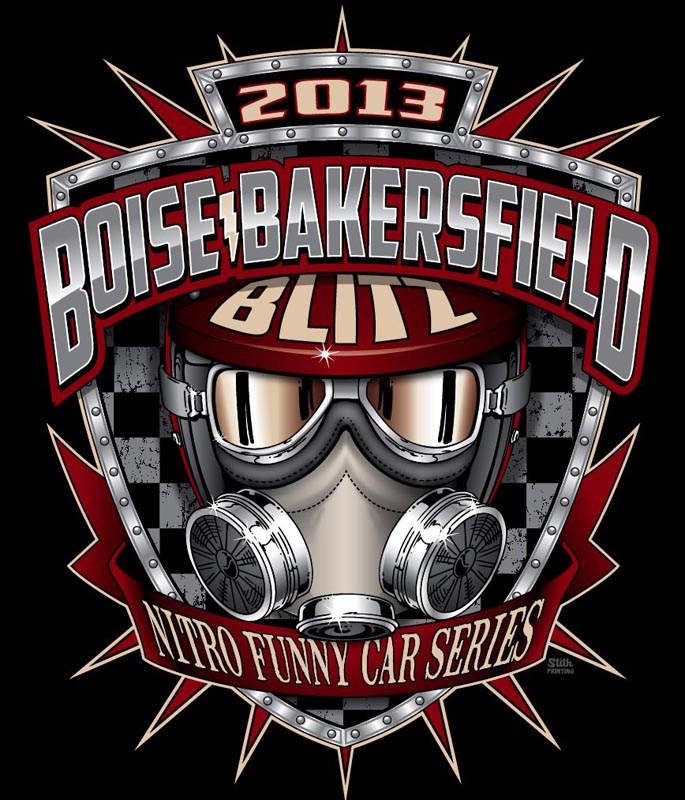 (Text and Photos by Darr Hawthorne, Photos Paul Schmitz)  Another hot Kern County, California weekend welcomed nitro cars to the second Saturday Night Nitro event of 2013 to Auto Club Famoso Raceway, north of Bakersfield.  During the day track temperatures had climbed to well over 150 degrees with Friday afternoon and evening ready for testing and tuning, 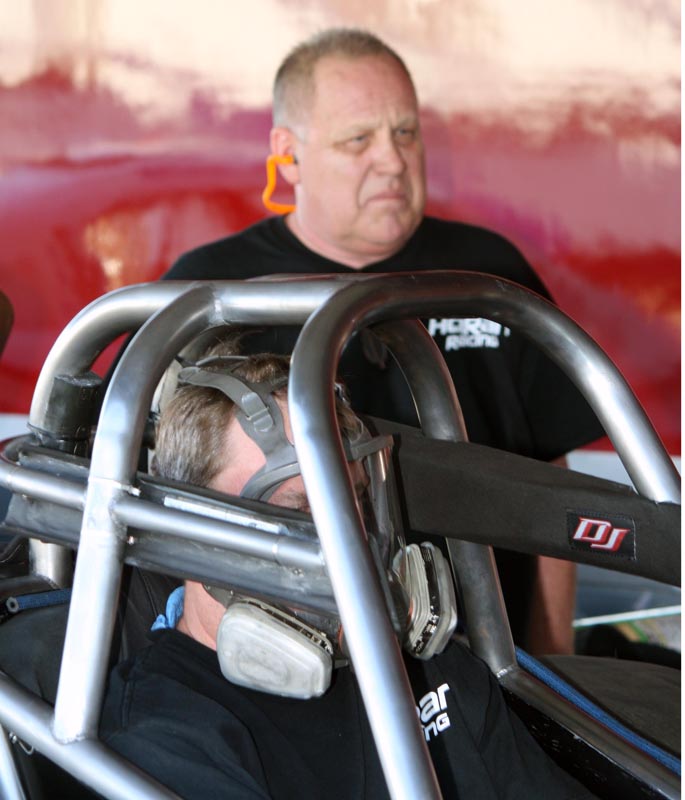 Crew Chief Ronnie Swearingen set up Dan Horan’s “Patriot” Mustang for another 5.80 ET evening as the only nitro funny car to get all the way down Famoso’s concrete quarter mile on Friday. 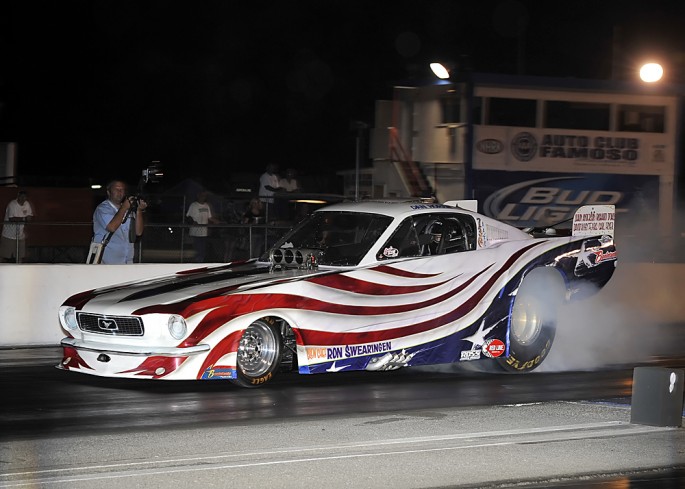 Horan was on his game in testing, slightly bettering the 5.81’s he had run in winning back to back Saturday Night Nitro events last September and a June 2013 victory over Robert Overholser driving Don Nelson’s “California Hustler” Firebird – a 5.812 to Overholser’s 5.815 in the Chicago-style funny car event. 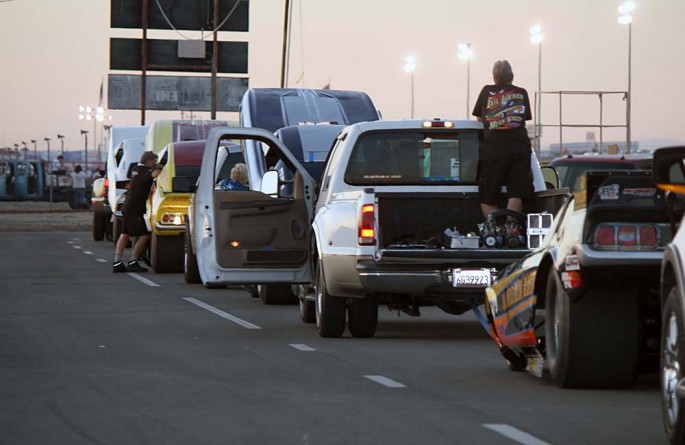 A traditional funny car parade preceded Saturday evening’s first round qualifier and by all indications it looked like Devery Howard, driving the Bays & Rupert “Black Plague” Camaro would be a favorite with his session leading 5.780/246.30 mph pass.  Dan Horan Jr. ran another of his bracket-like 5.809’s with Robert Overholser third with a 5.885/238.51 mph run in the Firebird. 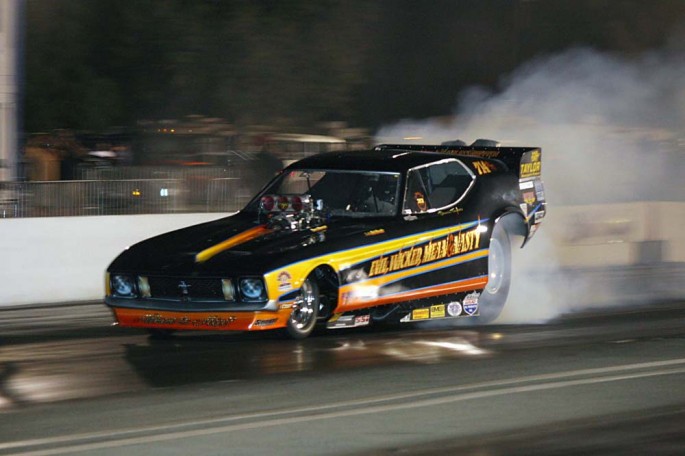 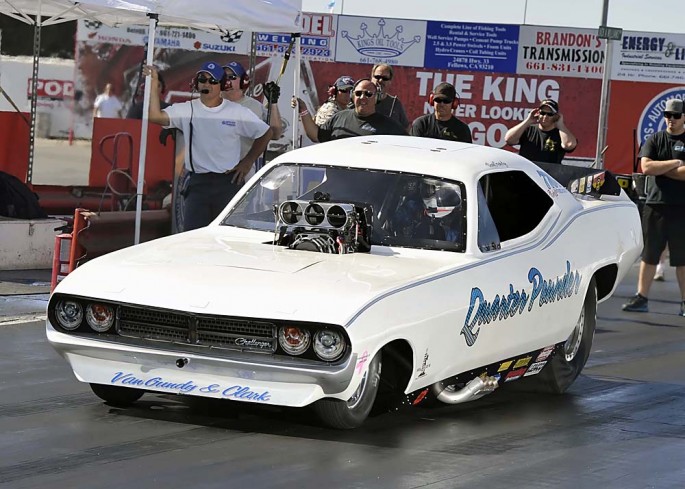 Rounding out the field in seventh was Dale VanGundy in the “Quarter Pounder” Challenger who damaged part of the fuel system on his 5.962/241.20 mph pass and Roger Garten driving his “War Horse” Mustang running a 6.115/233.72 mph. 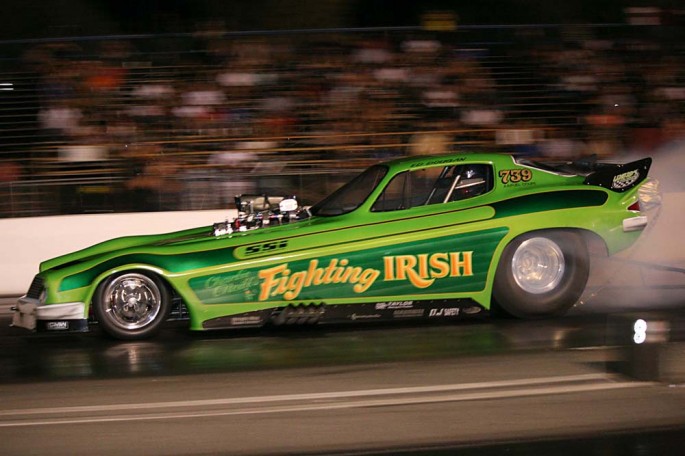 With issues on VanGundy’s funny car missing the Elimination round, Ed Dougan in the “Fighting Irish” Camaro was inserted into the eight car field as an alternate from the ninth position at a 6.139 ET. 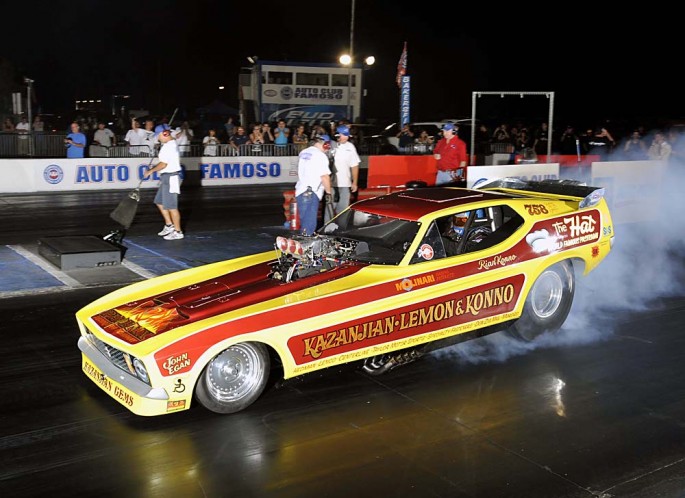 As the Quick Eight readied for the elimination round of Saturday Night Nitro, the air got noticeably cooler and the vibe reminded a lot veterans at Famoso of those hallowed nights at the long closed, iconic Orange County International Raceway. With that better air some Crew Chiefs pondered how much the track would hold and with the first pair out on the track, Rian Konno stepped up with a personal best in the “Kazanjian, Lemon & Konno” Mustang nailing a 5.735/248.39 mph, so far the best of the event in his winning effort over James Day. 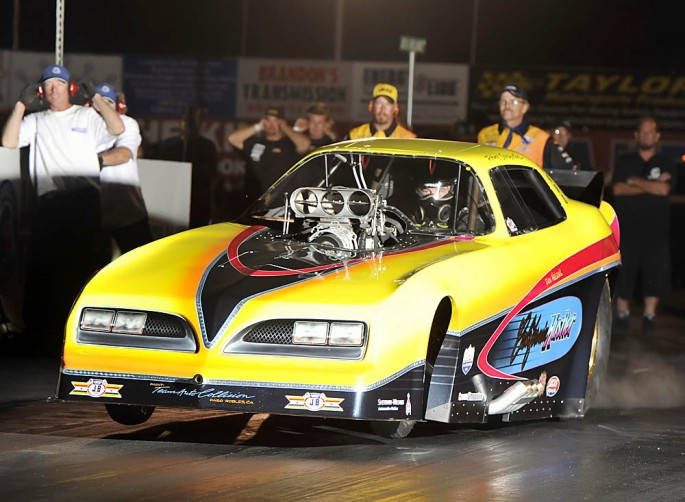 The second race paired Dennis Taylor and Robert Overholser, with the “California Hustler” having lane choice by qualifying position.  When the lights turned green Overholser had a slight starting line advantage and both front wheels in the air – at mid track the Firebird pulled away from Taylor’s Mustang, stopping the eight mile clocks at 3.750/197.19 mph after a cutting a stout .949 second 60-foot time, then on the top end recorded another personal best of 5.720/246.84 mph for the quickest ET of eliminations, so far. 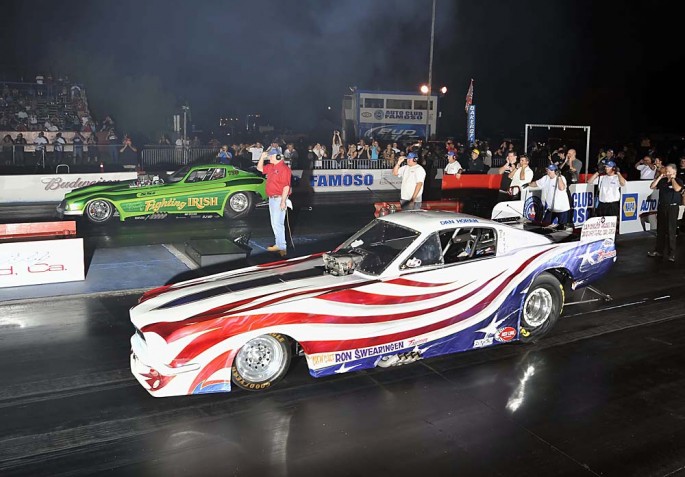 The Mustang of Dan Horan Jr. then took on Ed Dougan in the green “Fighting Irish” Camaro with Dougan launching well but ended up swapping lanes behind Horan on the top end.  Horan improved to a 5.764 ET at a storming 253.66 mph charge. 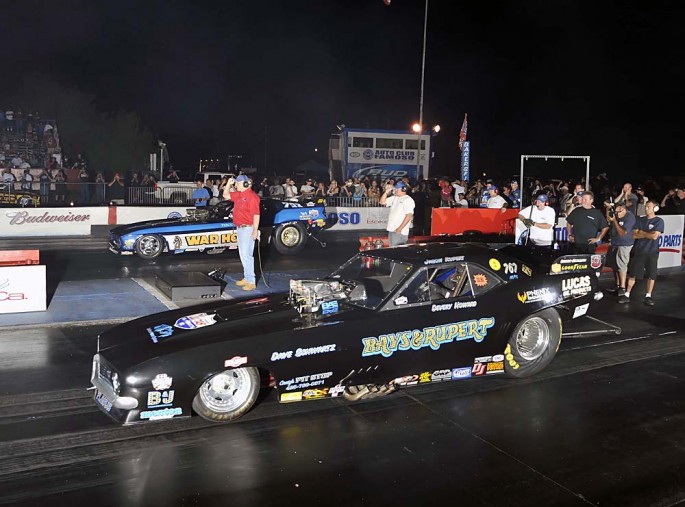 The final pair, with Devery Howard driving the same car that had won the Heritage Series Championship for two consecutive years with Jason Rupert driving, took on Roger Garten’s “War Horse”.  Rookie Howard lighted the red bulb, fouling out, handing the win to Garten.  But, while approaching the top end lights Garten’s car veered hard to the right, tagging the wall and bruising his car, while in the shut down area he exited the racecar uninjured, with a 6.385, slowing to 161.52 mph. 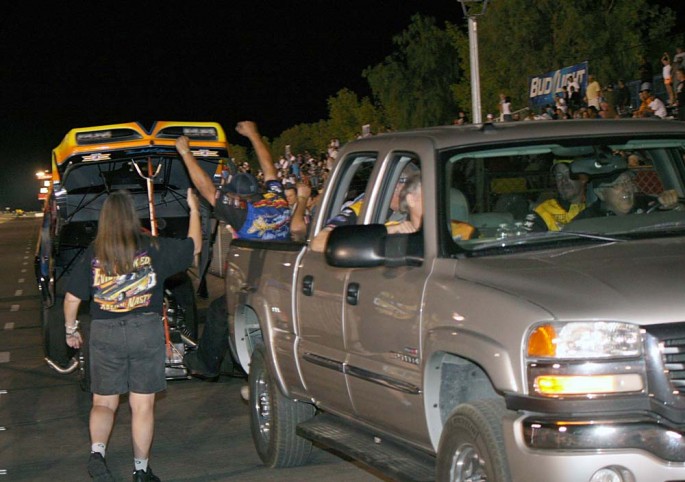 Towing back down the return road in front of the spectators, the “California Hustler” crew was jubilant with their 5.720 ET victory and made the turn into Famoso winner’s circle, with ear-to-ear smiles. 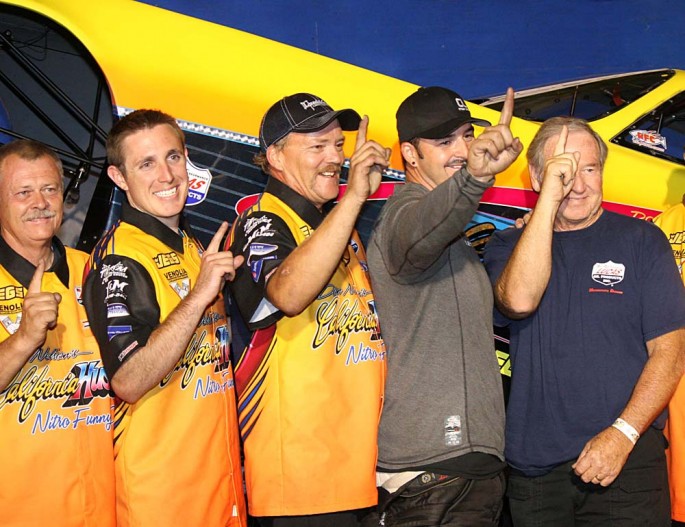 Overholser said of his first nitro victory, “Oh man, this has been a lifelong dream for me and to actually be living it – this is just surreal.  I couldn’t do it without Don Nelson (car owner) and I have an absolutely wonderful crew that I drive for.  You know, when I hit the throttle it was like a Mack truck hit me at a stop sign, and it hauled ass to half-track and didn’t shake.  When the crew met me on the top end, they yelled .949 60-foot with a 5.720 – I was just praying that it stuck through the end of eliminations.” 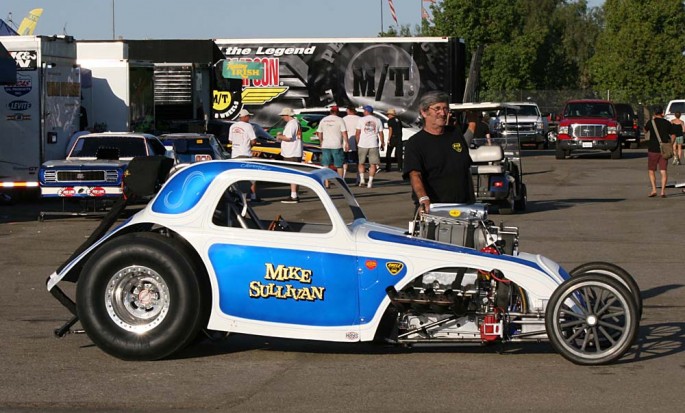 Saturday Night Nitro also attracts nitro cars from all over the west, including legendary fuel altered racer Mike Sullivan and his potent ’37 Fiat Topolino driven by son Jeremy who ran straight down the lane with a 6.37 at 202 mph.  There were also four nitro Harleys, three front motored Top Fuelers and a couple of A/Fuel dragsters warming up for the Western Swing of the Mello Yello NHRA Series. 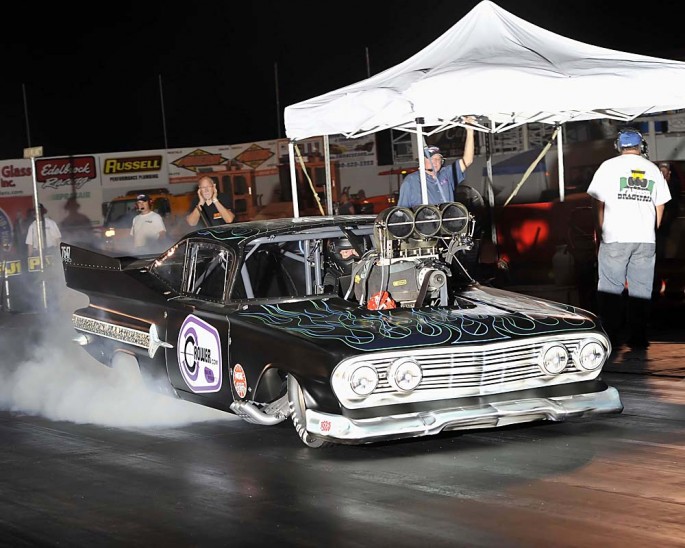 Rob Moore was out at Famoso making some exhibition passes in his Crower Cams-backed ’60 Impala Outlaw Pro Mod, this car is sick!

Another component of Famoso Raceway’s Saturday Night Nitro is a four-race alliance with Boise’s Firebird Raceway.  With a prize package nearing $4,000 in cash, nitro and prizes, racers started earning points during qualifying at the Boise Ignitor in the spring, the June and July Saturday Night Nitro events and concludes at Firebird’s Pepsi Nightfire Nationals next month.  The top participants in the Blitz this year are also part of a cash earning bonus program that’ll pay out in a special qualifying match up at the March Meet, back at Auto Blub Famoso Raceway in 2014. 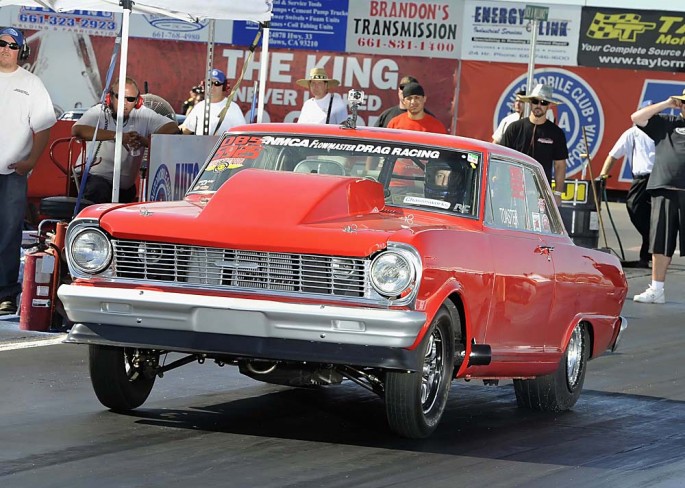 In Between rounds of nitro, cars of the West Coast Hot Rod Association ran their fast doorcars.  Ryan “Toaster” Jones in his ’65 Nova won in the Outlaw 8.5 Class when he defeated Matt Sendejas’ Mustang.  Jones also reset the WCHRA Record during eliminations. 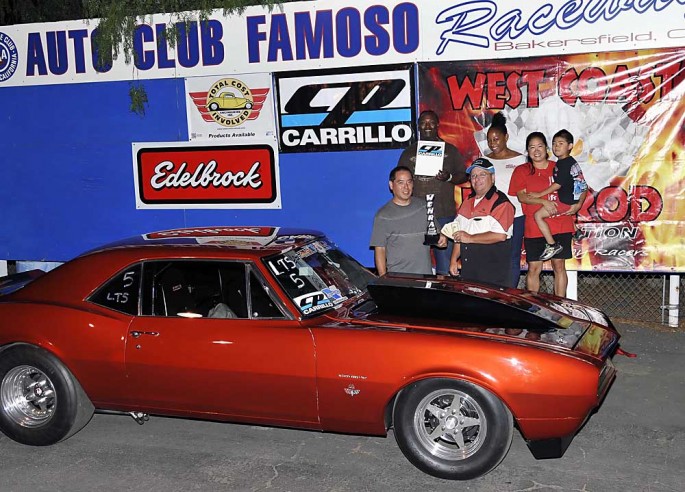 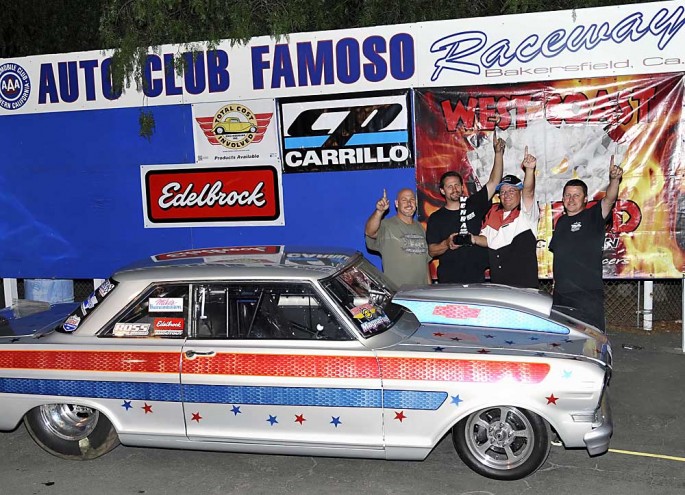 In the True 10.5 Class, Rich Hoyle in his Palmdale-based ’63 Nova took home the trophy by defeating Norman Chag in the final round.

The final Saturday Night Nitro of the year is September 7th at Auto Club Famoso Raceway.  If you yearn for the good old days of Saturday nitro racing, this is just about as close as you’ll find and if you weren’t around SoCal in the 1970’s, here’s an entertaining way to get your dose of nitro and fast racecars for a mere $20 bucks and bring the kids! For more information visit www.famosoraceway.com