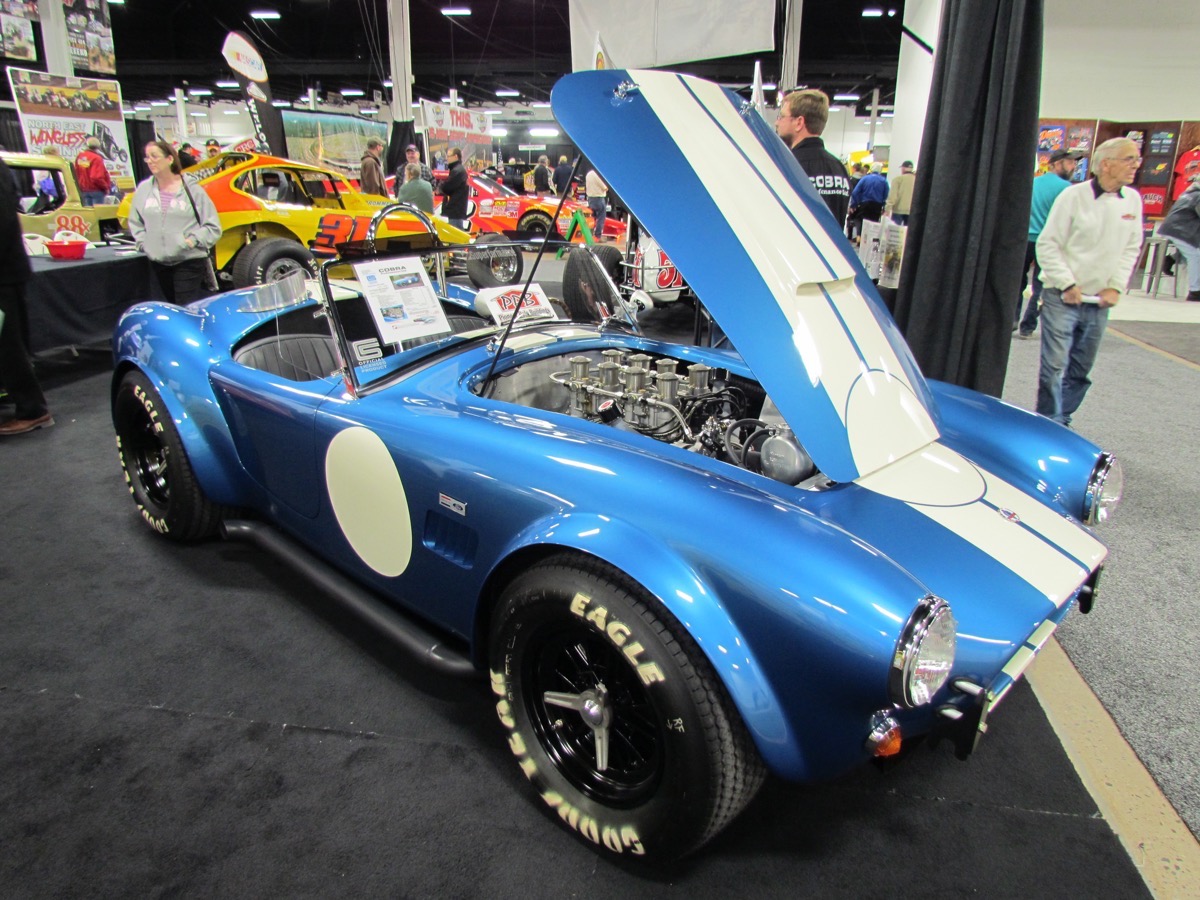 (Words and photos by Joe Grippo) – As the first major snowstorm of the year began to dump 2 plus feet of snow on Southeastern Pa, racers and fans from all over filed into the Greater Pennsylvania Expo Center for the 2016 Motorsports Racecar and Trade Show to get a glimpse of the upcoming race season. While mostly a dirt track and roundy-round exposition, each year more drag racers are showing off their stuff. We spied a few Top Dragsters, a bracket car or two and even a juiced up BBC powered Buick looking for trouble. The S&W Performance Group featured their built in-house Super Stock Cobra Jet Mustang of Belles Motorsports, a real work of art featuring many of the same pieces on display in their booth. Nostalgia drag fans were treated to the Frantic Ford N/FC and Paul Gold’s Logghe Chassis slingshot, each looking resplendent with blown Hemis sitting between their rails. A new and very cool feature for 2016 was Dom Lagana and the Twilight Zone Top Fuel Team demonstrating what is involved during between rounds maintenance of a modern fuel engine. As a big crowd surrounded the car, the team pulled the supercharger, manifold and heads while Dom fielded questions from the curious onlookers, explaining the process, parts and pieces. They then reassembled the engine and gave a detailed dissertation about the inner workings and importance of the clutch. It was very informative and entertaining, definitely the hit of the show.

Another major attraction is the variety of vintage Dirt Trackers that assemble each year. A nice mix of restos and untouched survivors of the violent battle grounds of legendary facilities such as Syracuse, Flemington, Langhorne, Wall, Reading Fairgrounds and more were lined up nerf bar to nerf bar. My pick was Gary Balough’s Batmobile, an infamous and controversial New York State Fairgrounds killer. Balough and Greg Weld (yes, that Weld) shod, at the time, the most high –tech dirt modified with Lincoln Town Car sheet metal. Insane. I had heard stories about the 112 and there it was sitting before my eyes. You can spend hours checking out the tricks and details of the car. Do yourself a favor and fire up the google machine and read about this deal. Loads of other vintage greatness was on hand too, like a Buzzy Reutimann Coupe, the Bowes Seal Fast Special from 1958, a Steve Kinser Winged Outlaw, a few Tobias cars and a bitchin’ Modified Valiant. Along with cars there was an awesome collection of memorabilia to ogle as well. Those killer old hand lettered track signs, body panels and helmets just oozed coolness.

One of the other benefits of this pre-season show is seeing all the latest racing hardware all shined up and clean before the getting all battle scarred and dirty as the season progresses. Gleaming Sprints, Late-Models, Modifieds and more were everywhere. A wide assortment of vendors hawked there latest products while answering questions, bench racing was non-stop and all the northeast tracks handed out schedules and flyers to help you fill in your race season calendar. This is annually a great mid-winter event but heading out at the end of the night into a serious snowstorm was a swift kick in the jewels, a  reminder that spring is still a few months away. Stay warm.

Unhinged: The Six New Presenters Of Top Gear Have Been Announced. Will The Show Be Worth Watching? Let's Look At The New Faces And Find Out... Top 11: Our Favorites From Mecum's 2016 Kansas City Auction - How Would You Treat Yourself?