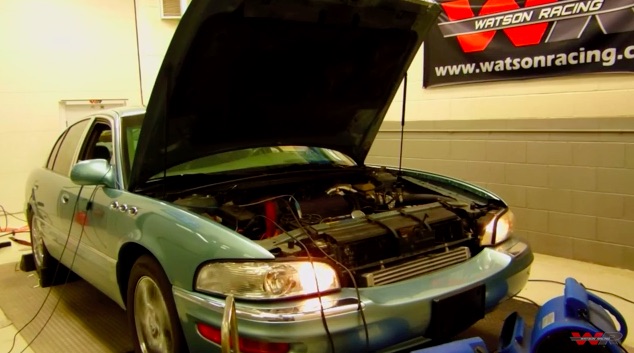 This video is short and sweet, just a single dyno pull featuring a 2003 Buick Park Avenue. Why should you bother watching it? This 2003 Buick Park Avenue ain’t the one your granddad bought back in ’03. Nope, it is not the Ultra model with the supercharged 3800 V6, instead this is a hot rodded, turbocharged version that looks and sounds utterly stock before the guy in the car hammers the throttle. The boys at Watson Racing claim that this thing laid down 505hp, through the front wheels on their dyno and they aren’t the story telling type.

Who builds this car? Someone who’s a genius, that’s who. We’re guessing that these Buicks were on the same platform as the “full size” front wheel drive Pontiacs of the same era. We have seen a few of them hot rodded to run 13s and stuff but we have never seen one making this type of power. The transaxle has to be the weak link in this combo but as is shown here, it’ll handle the power at least in short bursts.

Our new mission in life is to find out who owns this thing and learn more about it. Think it has ever run down a drag strip or is this one just a street killer that the guy keeps under wraps unless there’s some money to be won? Either way this is a pretty brilliant car and we’d love a ride in it.