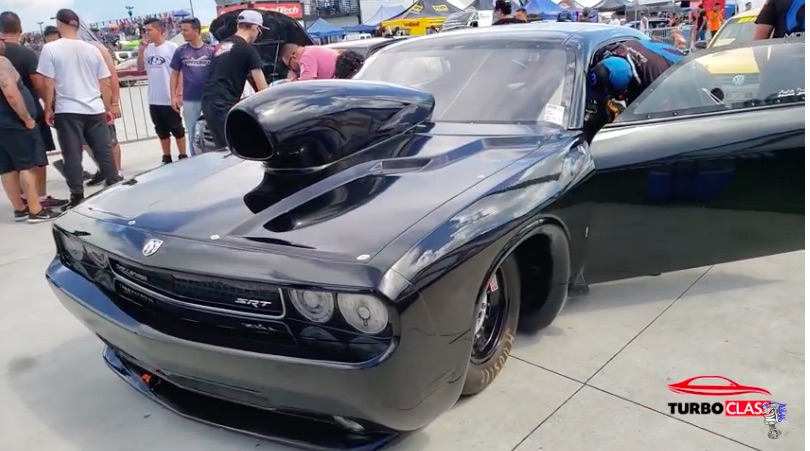 Now this is cool! We show you lots of drag racing videos from places like Brazil and Argentina because we love highlighting their scene and they also have loads of awesome cars that are different than what we have here in North America. That being said, we love us some cross-over action and that is exactly what we are looking at here with a car that’s going to be very familiar looking to American drag racing fans and maybe a but of culture shock for the racers in Brazil.

This late model style Dodge Challenger is obviously not an Opala and the car’s naturally aspirated small block Mopar engine is built to the hilt for sure. Nope, there are no turbochargers and the engine is laid out in a V, not inline like virtually everything else we see from down there.

The car is plenty fast, using a (what looks like to us, anyway) torque converter driven Liberty transmission that the driver has programmed to auto-shift. There is no shifter that the driver is operating and we do not see him pressing a button on the way down the track. The FuelTech unit in the car may be handling that operation.

Running low 5s in the eighth naturally aspirated is awesome and this thing is just that. Check it out!

Manifold Unobtanium For Sale: This Piece For A 303ci Ram Air V Pontiac Is Amazingly Cool Flying Start Video: Ride Along In A 1974 IROC Porsche At Sebring - This Thing Dominates The Start!