Speed Week 1957 Film: This Incredible Movie Is In Color, Has Full Sound, Narration, and Goodness! 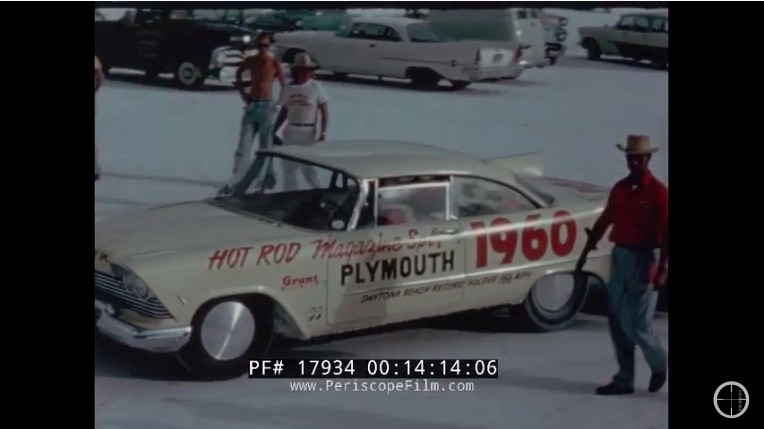 The internet makes us smile REALLY BIG some days. Most others we want it all to fall down a hole but today is a big smile day. Why? Because have found a jaw dropping Speed Week 1957 film that shows the salt how it was in full color, with full sound, narration, and brilliant clarity. I screened this particular video with Freiburger and we spent the whole time picking out people, cars, and history that we know and love. Hell, you’ll even see Wally Parks at the wheel in this one!

Made by the Wynn’s oil company it features the quest of a streamliner team to become the fastest in the world in their particular class. We’re not giving away the car, the engines, or the success of the team in the venture. It is all laid out and shown perfectly in the film.

The tininess of the event is something that may strike you as you see some aerial imagery in the film. It is literally a small circled wagon looking group of hot rodders on the vast expanse of the Bonneville Salt Flats. Heck, eagle eyed viewers will note that the opening footage of the cars driving onto the salt is shot out of the windshield of a brand new 1957 Chevrolet. Pretty awesome.

This is one of the, if not the single best 1950s Bonneville footage we have ever come across. Lovers of vintage speed will absolutely hang on every second. We were enthralled.

The Man Who Turned A Simplicity Tractor Into A Miniature Combine Lawn Mower Is The Greatest Living American Bathurst 1969 Video: At The Peak Of Total Performance Ford and Holden Fight An Aussie War

2 thoughts on “Speed Week 1957 Film: This Incredible Movie Is In Color, Has Full Sound, Narration, and Goodness!”