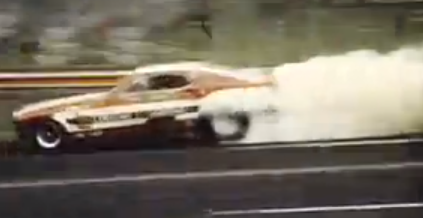 Tom Prock and Jay Howell formed one of the most interesting and successful drag racing partnerships of the late 1960s back in 1967/68. At the time, Howell was working at the famed Logge Stamping Company overseeing their shop. Logge was a very large volume producer of drag racing chassis at that time and along with all of their other projects, a guy named Tom Prock had a 1933 Willys that he wanted updated. Instead of going the standard direction, the guys put a Logge funny car chassis under it and were quickly informed by NHRA officials at their first event that the car was not legal to run there or anywhere in the gas classes due to said chassis. They raced the car here and there in 1968 on the match race circuit and then figured it was all done. Then the phone rang in early 1969 and the boys decided to hitch up with a couple of other gassers, load a nitro burning 426 hemi into the front of their car and travel the country as “outlaw gassers”. The F-Troop ’33 Willys is legend for wild runs with Howell at the wheel. The car went into the 180s and in various interviews, Howell said that the thing was a complete handful to get down the track at those speeds. We can only imagine.

Fast forward to the winter of 1970 where the Logge Brothers, Prock, and Howell all decide that they want to go funny car racing. They took the engine right out of the Willys and plugged it into a Mustang funny car with their own pipe under it. While you can’t see it in this video, the car had the name “Warhorse” painted across the fake front grill area and the guys did well, finishing in the top five of points in the AHRA season that year. They won events, ran a bunch of match races successfully, and proved that their gasser skills were no flash in the pan.

Howell continued driving off and on for a short time after that season, but for the most part he was done. In the time that Jay Howell was involved in the sport he helped wrench on and drive some of the most iconic machines of the day including the Little Red Wagon wheelstander. Yep, he drove it before Maverick got a sniff!

This video is from that 1970 AHRA season. The footage comes from the amazing archive of Jim Amos and what’s great about it is the fact that it has sound. It isn’t perfectly synched, but who the hell cares. You head old school cackling nitro motors. Why is this a Parting Shift? Because funny cars had two speed transmissions back then, like alky cars do today. So put that in your four speed and smoke it!

Wild Video: Watch An Insane Brazilian Towing Situation Teeter On The Verge Of Catastrophe But Somehow Succeed Rhinoplasty, Stat: Foose Takes On The Challenge Of Making The Pontiac Aztek Pretty